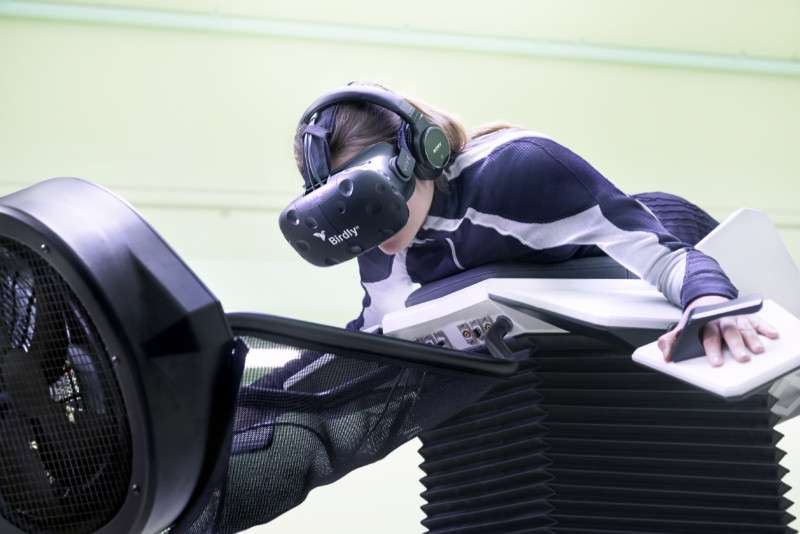 In the attractions industry, there are coasters and flat rides and simulations where guests are maneuvered into position and taken through the air, given the sensation of flying. One thing these rides can’t offer guests is control over where they go. In a new virtual reality simulator called Birdly®, riders lie prone on a platform, arms extended, as if they’re flying through the air. This is augmented through a combination of motion control, virtual reality, 3D sound, and environmental effects to create an experience in which the user is free to “fly” through a virtual landscape, in whatever direction is desired.

Developed at the Zurich University of the Arts, and distributed in most global territories by D3D Cinema, Birdly has been well received in the museum and zoo markets and has been installed in a number of leading institutions, including the Tech Museum of Innovation (San Jose, CA) and Houston Museum of Natural Science. Birdly has also made appearances at the Sundance Film Festival and SXSW, where it proved to be a popular attraction. This year, Birdly makes its IAAPA Attractions Expo premiere in Orlando, marking its introduction into the wider attractions market.

We spoke to Tom Rooney, Birdly VR Director of Sales and Marketing for D3D Cinema, about this singular, new virtual reality platform. – J.K.

What differentiates Birdly from other VR simulators?

Most other VR relies solely on a headset to generate images and sounds, while Birdly is a full body experience. The visual, aural and haptic wind sensations combine with a motion table to create a motor-sensory coupling that is extremely realistic. What’s more, Birdly is almost as much fun to watch as it is to fly, creating a rare ‘social VR experience.’

You’re introducing Birdly to the attractions market at the IAAPA Attractions Expo. What advantages would this product deliver to an attraction or park?

Like much of the VR industry, Birdly has proven to be a very popular – and financially lucrative – attraction wherever it’s installed, drawing long lines and generating considerable social media buzz. The museum, zoo and aquarium market has generated incredibly strong response and so we’re scaling into various commercial and attractions segments over the course of the next year. We can create custom experiences for the platform – from cities to dinosaur environments to branded IP content. It’s truly an exhilarating and memorable way to explore any virtual world.

Giant Screen Films and its sister company, D3D Cinema, have to date been primarily focused on immersive cinema production and distribution, along with theater systems. How does Birdly fit into the company’s business plan, and what other types of products is D3D looking at for the future?

For over 20 years, Giant Screen Films’ mission has been to create immersive content that inspires, challenges, and enriches the imaginations of audiences. D3D pioneers cutting-edge, immersive technological solutions to tell these stories, so Birdly is a natural next step in the mission of both companies.

Birdly will be demonstrated at the D3D Cinema booth (#684) at the 2017 IAAPA Attractions Expo. More information: www.d3dcinema.com/birdly, [email protected] •

Joe Kleimanhttp://wwww.themedreality.com
Raised in San Diego on theme parks, zoos, and IMAX films, InPark's Senior Correspondent Joe Kleiman would expand his childhood loves into two decades as a projectionist and theater director within the giant screen industry. In addition to his work in commercial and museum operations, Joe has volunteered his time to animal husbandry at leading facilities in California and Texas and has played a leading management role for a number of performing arts companies. Joe previously served as News Editor and has remained a contributing author to InPark Magazine since 2011. HIs writing has also appeared in Sound & Communications, LF Examiner, Jim Hill Media, The Planetarian, Behind the Thrills, and MiceChat His blog, ThemedReality.com takes an unconventional look at the attractions industry. Follow on twitter @ThemesRenewed Joe lives in Sacramento, California with his wife, dog, and a ghost.
Share
Facebook
Twitter
Linkedin
Email
Print
WhatsApp
Pinterest
ReddIt
Tumblr
Previous articleFrom floats to starships: Rando Productions
Next articleGeoff Thatcher: Former amusement park cleanup boy makes good