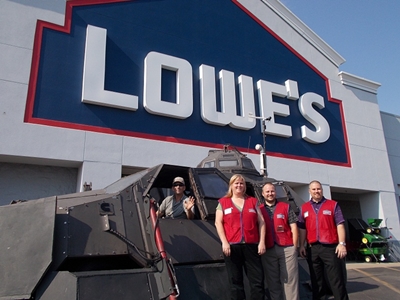 Evanston, IL, USA (September 5, 2012) — A pilot event that brought Tornado Alley, along with science and safety presentations to northeastern Oklahoma, was hosted earlier this month by the Lowe’s store in Broken Arrow. The educational program included free special screenings of Tornado Alley using a traveling digital 3D projection system—allowing a temporary theater to be built on site. Director Sean Casey brought the Tornado Intercept Vehicle, also known as the TIV-2, and was joined by weather scientists from Oklahoma University who introduced the community to current weather research and discussed weather safety practices. Other first responders and members of the region’s hazards safety community—including representatives from the American Red Cross—were present at the store to share their resources and expertise.

“We’re thrilled to work with Lowe’s to expand the impact of our NSF-funded outreach campaign,” said Deborah Raksany, VP of development and partnerships for GSF. “Their involvement will help bring attention to the needs of those that have been affected by severe weather. Lowe’s has fantastic community connections that are really effective in sharing our messages about weather safety and research.”

In addition to helping audiences gain a greater understanding of the science behind severe weather, Tornado Alley emphasizes the critical importance of research that will improve warning times, protecting the lives of those who live in affected communities. NSF-supported outreach activities will continue in the spring of 2013 in affected areas ranging from Joplin, Missouri, to Nebraska and South Dakota.

“Lowe’s is proud to host this amazing pilot program which brings vital safety information to the Oklahoma community,” said Joan Higginbotham, Director of Community Relations. The event in Broken Arrow highlighted the importance of weather research and early warnings which could potentially save lives. Through programs like these, we continue to be committed to serving the communities where we live and work.”

Joe Kleimanhttp://wwww.themedreality.com
Raised in San Diego on theme parks, zoos, and IMAX films, InPark's Senior Correspondent Joe Kleiman would expand his childhood loves into two decades as a projectionist and theater director within the giant screen industry. In addition to his work in commercial and museum operations, Joe has volunteered his time to animal husbandry at leading facilities in California and Texas and has played a leading management role for a number of performing arts companies. Joe previously served as News Editor and has remained a contributing author to InPark Magazine since 2011. HIs writing has also appeared in Sound & Communications, LF Examiner, Jim Hill Media, The Planetarian, Behind the Thrills, and MiceChat His blog, ThemedReality.com takes an unconventional look at the attractions industry. Follow on twitter @ThemesRenewed Joe lives in Sacramento, California with his wife, dog, and a ghost.
Share
Facebook
Twitter
Linkedin
Email
Print
WhatsApp
Pinterest
ReddIt
Tumblr
Previous articleMalaysian Journalist Previews New LEGOLAND
Next articleElectrosonic Provides AV Systems to North Carolina Museum of Natural Sciences’ New Nature Research Center