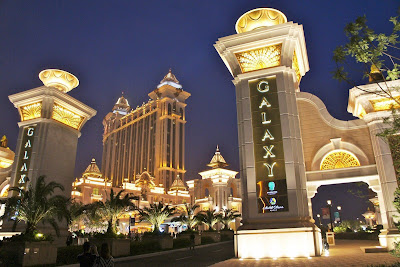 This is the first year in which the International Gaming Awards has presented a gaming “Oscar” in the category of “World’s Best Casino / Integrated Resort of the Year,” and the shortlist for that award was comprised of the most high profile integrated resort properties from around the world. The International Gaming Award is the fourth major award that the Galaxy Macau has won since its opening—the destination also won the “Best Integrated Resort” Award at the Top Travel Awards event which was held in Beijing in December 2011.

“I am incredibly proud of our role as the designer charged with creating the concept, master plan and schematic design for this incredible destination,” Goddard said. “In just a few short months, the Galaxy World Macau venue has become a world class mega resort visited by hundreds of thousands of people from all over the world, and now has also become the winner of several major industry awards. We ensured The Galaxy was not a copy of something from Las Vegas or elsewhere, but an original ‘Must See’ experience that stands alone and apart.”

Adds Goddard, “Working closely with Dr. Che-woo Lui (Chairman of Galaxy Entertainment Group) and Francis Lui (CEO of Galaxy Entertainment Group), our goal for the Galaxy World Macau was to create an Asian- inspired fantasy world of exotic beauty and timeless wonders. It was to be appealing, first and foremost, to the Asian guests who come to Macau from all areas of Southeast Asia. Secondly, for the western tourists who come to Macau, we wanted a very special resort casino that could only be seen in Macau and that speaks to an Asian experience. I think we have achieved our goal with this spectacular and elegant design – a true tropical paradise built upon a mythical world steeped in Asian spirit.”

Dr. Che-woo Lui, Chairman of Galaxy Entertainment Group (GEG), said, “We are delighted to receive such encouraging global recognition for our achievements and success in delivering our vision. GEG‘s objective has always been to build a unique identity, and develop our casinos and resorts to a world class standard. These awards not only recognize this vision, but are also a great endorsement of our management team‘s endeavor and the passion of our devoted staff to succeed. We are proud to have created a globally recognized standard, and we have defined a new category in the industry, especially in the Asia Pacific region. We are also delighted that GEG is helping Macau diversify into an international tourism and leisure destination.”

ABOUT THE GALAXY MACAU RESORT:

The 550,000 square meter Galaxy Macau opened on May 15th, 2011 and offers a number of game-changing features and amenities which help make The Galaxy Macau the most complete holiday destination in Macau:

ABOUT THE INTERNATIONAL GAMING AWARDS (IGA):

The International Gaming Awards (IGA) is the Oscars of the gaming community which held its fifth extravagant awards ceremony in London this week. IGA offers a unique opportunity to meet, mix and mingle with architects of change. The prestigious awards event unites industry professionals from all around the world. It focuses on highlighting the achievements of online and land-based professionals across various sectors of gaming. The Judging panel consists of leading international industry professionals, specialized journalists, analysts, investors and consultants. Using their industry knowledge and professionalism within gaming, they judged entries in 18 categories. For more details, please visit http://gaming-awards.com.

Currently celebrating its 10th Anniversary, The Goddard Group, launched by Gary Goddard in 2002 in Los Angeles, has grown to become one of the most successful independent entertainment design firms working in the industry today, having designed and opened over a dozen currently-operating attractions and destinations all over the globe. If you’ve ever been to New York’s Times Square, Las Vegas, Tokyo, Sydney, Cape Town, Jakarta, Hollywood, Shanghai or the Philippines, chances are you’ve personally experienced one of the themed entertainment attractions, hotels, resorts, aquariums, retail outlets or visitor centers designed and produced by Gary Goddard and The Goddard Group.
While best known for theme parks, attractions, resorts and casinos, Goddard and The Goddard Group specialize in a broad range of mediums, having also designed museums, and retail malls, as well as having produced Broadway shows and creating outstanding 3D/ 4D attractions. www.garygoddard.com

Joe Kleimanhttp://wwww.themedreality.com
Raised in San Diego on theme parks, zoos, and IMAX films, InPark's Senior Correspondent Joe Kleiman would expand his childhood loves into two decades as a projectionist and theater director within the giant screen industry. In addition to his work in commercial and museum operations, Joe has volunteered his time to animal husbandry at leading facilities in California and Texas and has played a leading management role for a number of performing arts companies. Joe previously served as News Editor and has remained a contributing author to InPark Magazine since 2011. HIs writing has also appeared in Sound & Communications, LF Examiner, Jim Hill Media, The Planetarian, Behind the Thrills, and MiceChat His blog, ThemedReality.com takes an unconventional look at the attractions industry. Follow on twitter @ThemesRenewed Joe lives in Sacramento, California with his wife, dog, and a ghost.
Share
Facebook
Twitter
Linkedin
Email
Print
WhatsApp
Pinterest
ReddIt
Tumblr
Previous articleMultiTouch Introduces 42" LCD Touch Displays
Next articleSix Flags Great America Tops Off 2012 Coaster X-Flight