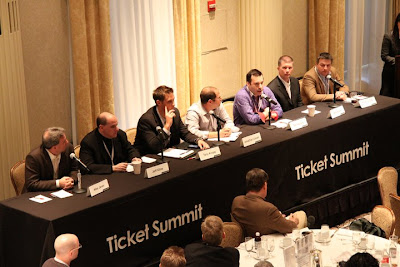 South Windsor, CT, USA (Jun 18, 2012) /Marketwire/ — Ticket Summit®, the leading conference and trade show for the live entertainment and ticketing industry, today announced that its conference schedule will be expanded to include marketing and business development sessions. Participating companies include Google, Groupon, Increase Visibility, Media One Pro, and more. Scheduled for July 11-13, 2012 at Bellagio in Las Vegas, NV, the Ticket Summit® conference and trade show will have sessions on Web 2.0, mobile, and online technologies; and strategic partnerships and ticket bundling, among other relevant industry topics.

The Ticket Summit® schedule features two new formats — workshops and roundtable discussions — in addition to its more traditional panel sessions. Workshop sessions and roundtable discussions will focus on business development. Mike Lorenc, head of industry: ticketing and live events for Google, will present a workshop titled Hang out with Google!, in which he will demonstrate Google’s advertising and social media technology. Other workshops include Innovative Technologies, Ticket Trading in the Global Market, and How to Prevent Online Fraud.

The concurrent trade show will include a variety of exhibitors, such as ATBS, Settlement Recovery Group, Ticket Evolution, Transaction Services, and others. Sponsors include House of Blues, Las Vegas Convention and Visitors Authority, TIX CITY, Venues Today, and other companies.

“We are excited to have an event schedule that includes sessions that address relevant industry as well as business development topics,” said Dr. Molly A. Mérez, Executive Director,Ticket Summit®. “By providing well-rounded content, our attendees are able to stay up to date on industry issues, as well as gain concrete tips and strategies for their business development and operations. Regardless of the industry an attendee is in, everyone will have something to learn at Ticket Summit®.”

Joe Kleimanhttp://wwww.themedreality.com
Raised in San Diego on theme parks, zoos, and IMAX films, InPark's Senior Correspondent Joe Kleiman would expand his childhood loves into two decades as a projectionist and theater director within the giant screen industry. In addition to his work in commercial and museum operations, Joe has volunteered his time to animal husbandry at leading facilities in California and Texas and has played a leading management role for a number of performing arts companies. Joe previously served as News Editor and has remained a contributing author to InPark Magazine since 2011. HIs writing has also appeared in Sound & Communications, LF Examiner, Jim Hill Media, The Planetarian, Behind the Thrills, and MiceChat His blog, ThemedReality.com takes an unconventional look at the attractions industry. Follow on twitter @ThemesRenewed Joe lives in Sacramento, California with his wife, dog, and a ghost.
Share
Facebook
Twitter
Linkedin
Email
Print
WhatsApp
Pinterest
ReddIt
Tumblr
Previous articleInformation Builders Chosen by Columbus Zoo to Manage Information Systems
Next articleBosch Home Appliances Features at EPCOT’s VISION House

Pyek Group signs with accesso for eCommerce agreement for its four U.S.-based waterparks