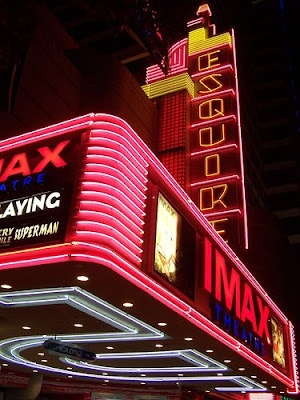 When it opened in 1940, the Esquire Theatre featured the tallest cinema marquee west of the Mississippi.  The theater remained in operation through the 1980’s, by which time it had become a grindhouse showing Hong Kong action films.  In 1999, it was reborn as an IMAX theater as part of a new office and retail development, and as a flagship to the revitalization of Sacramento’s historic K Street Mall. The origital marquee was retained, with the doors, entrance tile, and poster cases either being restored or replicated.  Everything behind the facade is new construction.

The top two floors of the theater are a parking garage shared with the office building next door.  Because of the need to keep the marquee as the tallest part of the structure, a unique architectural approach was taken.  Instead of guests entering at the bottom of the auditorium and working their way up, as is common in stadium seating theaters, a three story pit was dug into the ground, with guests entering and exiting at the rear of the auditorium at ground level.  The parking structure precluded lowering the film projector into the theater via helicopter or crane, so a two story rotunda was created to haul it up to the second floor projection booth. The rotunda remains one of the theater’s signature design features.

The Esquire IMAX Theatre opened in March 1999, showcasing the 200th IMAX projection system, and was featured in IAAPA’s Funworld magazine.  The theater’s opening won both a Bronze Ring award from IAAPA and the Silver Anvil Award from the Public Relations Society of America.  The Esquire IMAX Theatre, one of three theaters completely owned and operated by IMAX Corporation, will reopen to the public after the conclusion of the GSCA conference.

Joe Kleimanhttp://wwww.themedreality.com
Raised in San Diego on theme parks, zoos, and IMAX films, InPark's Senior Correspondent Joe Kleiman would expand his childhood loves into two decades as a projectionist and theater director within the giant screen industry. In addition to his work in commercial and museum operations, Joe has volunteered his time to animal husbandry at leading facilities in California and Texas and has played a leading management role for a number of performing arts companies. Joe previously served as News Editor and has remained a contributing author to InPark Magazine since 2011. HIs writing has also appeared in Sound & Communications, LF Examiner, Jim Hill Media, The Planetarian, Behind the Thrills, and MiceChat His blog, ThemedReality.com takes an unconventional look at the attractions industry. Follow on twitter @ThemesRenewed Joe lives in Sacramento, California with his wife, dog, and a ghost.
Share
Facebook
Twitter
Linkedin
Email
Print
WhatsApp
Pinterest
ReddIt
Tumblr
Previous articleThe Nest Halloween Attraction to Integrate Social Media and RFID Into Haunt
Next articleNSCA and InfoComm End Partnership: NSCA to Retain Supportive Role