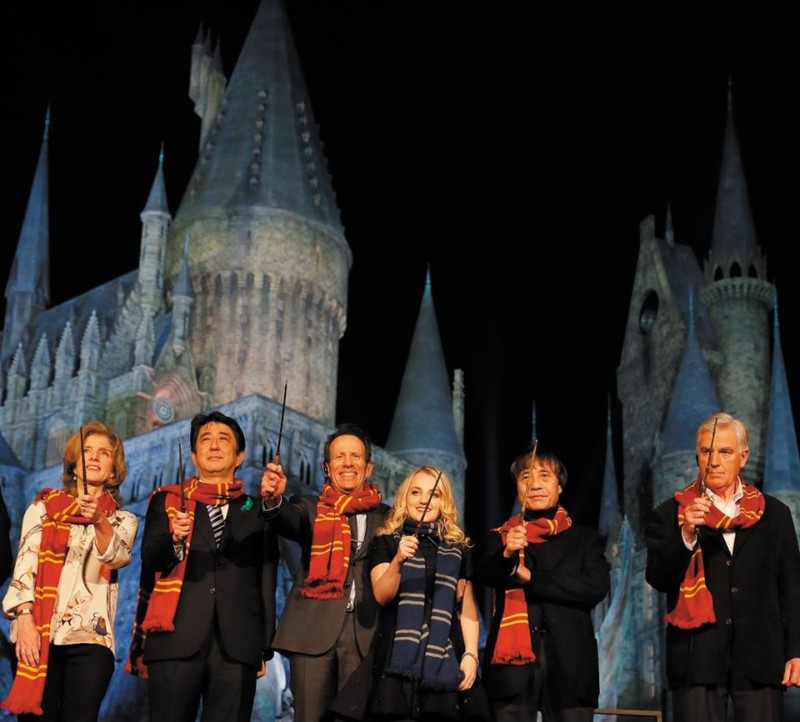 [quote]We cannot wait for the July 15 opening. ‘The Wizarding World of Harry Potter’ will be a wonderful addition to Universal Studios Japan and will contribute to energizing Osaka and the local economy.” — Japanese Prime Minister Abe[/quote]

When Prime Minister Abe and Ambassador Kennedy announced the opening date, Hogwarts castle was illuminated with a spectacular show of lights and brilliant fireworks.

“It’s wonderful to be here tonight to celebrate another dimension of the United States-Japan alliance,” said Ambassador Kennedy. “Harry Potter inspired a generation of children to love reading?and when they are not reading, I hope they come to ‘The Wizarding World of Harry Potter.’”

The evening’s celebration began with an “owl” delivering a letter from Hogwarts to President and CEO of Universal Studios Japan, Mr. Glenn Gumpel, who was revealed on stage with the letter in hand to introduce the honored guests.

Guests Evanna Lynch, Stuart Craig, Tadao Ando and SMAP were greeted on stage with loud cheers, and the appearance of United States Ambassador Kennedy was met with thunderous applause.

With distinguished guests from around the world gathered, Mr. Gumpel presented the letter from the wizarding world to Prime Minister Abe and Ambassador Kennedy, who together, reading from the letter, announced “The Wizarding World of Harry Potter” opening date. At that moment, Hogwarts castle was illuminated with a radiant light show with fireworks, which unveiled its towering scale and lit up the night sky.

Following additional remarks by Prime Minister Abe, Ms. Evanna Lynch led the guests in casting the spell “Lumos!” followed by more dazzling fireworks to the further the excitement and joy of the crowd.

A special website, where you can begin to explore “The Wizarding World of Harry Potter” online, has now launched. Please visit www.usj.co.jp/harrypotter in the official Universal Studios Japan website.

Universal Studios Japan received an annual 10 million visitors for the second time this past March 19 (day 353 of fiscal year), which is the first time USJ has achieved this milestone since the park’s opening in 2001, and, thanks to all, continues to perform strongly. With the much-anticipated opening of “The Wizarding World of Harry Potter,” USJ looks to continue to attract more visitors from both Japan and worldwide.

Joe Kleimanhttp://wwww.themedreality.com
Raised in San Diego on theme parks, zoos, and IMAX films, InPark's Senior Correspondent Joe Kleiman would expand his childhood loves into two decades as a projectionist and theater director within the giant screen industry. In addition to his work in commercial and museum operations, Joe has volunteered his time to animal husbandry at leading facilities in California and Texas and has played a leading management role for a number of performing arts companies. Joe previously served as News Editor and has remained a contributing author to InPark Magazine since 2011. HIs writing has also appeared in Sound & Communications, LF Examiner, Jim Hill Media, The Planetarian, Behind the Thrills, and MiceChat His blog, ThemedReality.com takes an unconventional look at the attractions industry. Follow on twitter @ThemesRenewed Joe lives in Sacramento, California with his wife, dog, and a ghost.
Share
Facebook
Twitter
Linkedin
Email
Print
WhatsApp
Pinterest
ReddIt
Tumblr
Previous articleHuge Lion Archway Made of 26,000 LEGO Bricks Assembled at LEGOLAND California’s Chima Water Park
Next articlePixel-Perfectionists 7thSense Design Scoop Queen’s Award for Enterprise Innovation