Recently, a major international theme park operator approached ETC looking for a robust, modern luminaire suitable for long-term live shows and attractions. The operator sought a product that would use less power, require less maintenance and have more mounting options than theatrical fixtures currently on the market. ETC responded to the challenge by designing the new Cyberlight LED, an update of its Cyberlight rotating mirror luminaire, manufactured by ETC at its plant in Austin, Texas.

ETC owns High End Systems, which introduced the original Cyberlight in 1994 as a spotlight for theatrical presentations and concerts. The term “luminaire” indicates that the product’s light source, rotating mirror, gobos, color wheel, and other components are all included within a single chassis. 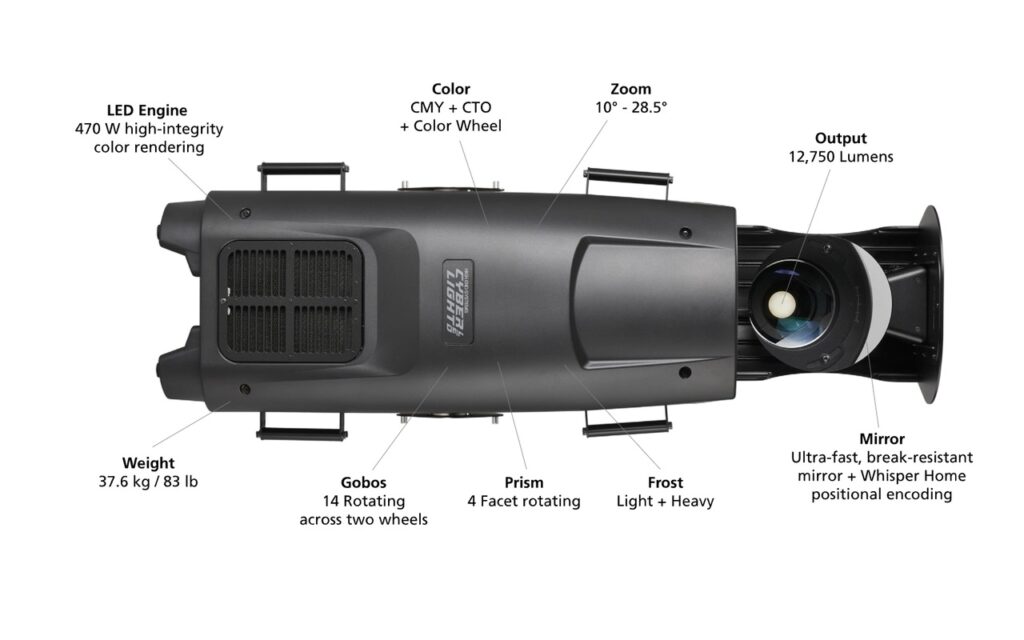 Matt Stoner (Marketing Product Manager, ETC) and Scott O’Donnell (Themed Entertainment Specialist, ETC) anticipate the new Cyberlight LED will be a popular upgrade for parks and attractions. They pointed out some of the features that make it a competitive choice in terms of technology and creative potential, whether in new projects or swapped for older models in existing installations.

According to Stoner, the new Cyberlight LED makes colors pop more, with a high color rendering index (CRI) and a cooler operation and longer life than earlier Cyberlight models. “When you use a high-powered traditional bulb, you sacrifice color,” he says. “With the Cyberlight LED, we get a color rendering of over 90,” he says. The CRI measures a light source’s ability to reveal colors compared to natural light. A rating of 90-100 is considered excellent.

The Cyberlight LED is touted as cooler by half than its predecessor and offers 50 times longer life than the arc lamp version. The Cyberlight SV utilized a 1200-watt MSR (Medium Source Rare-earth hot-restrike) bulb, producing an ambient (environmental) temperature heat signature of up to 122 degrees Fahrenheit. Because light emitting diodes (LEDs) run so much cooler, the wattage is reduced to 470 watts, producing 12,570 field lumens, with an ambient temperature of 104 degrees.

According to O’Donnell, who is based out of ETC’s Orlando office, “Unlike its predecessor, the Cyberlight LED dims out the LED array instead of using a manual gate, which means energy is being saved between performances or guest vehicles.”

Stoner adds: “When Cyberlight was new to the market, people didn’t think about energy conservation in lighting the same way they do now. The older model of the Cyberlight had a life of about 1,000 hours. Because you conserve power with the LED, we’ve calculated that the new light source has a lifetime of over 50,000 hours.”

The new model also features an expanded creative range. “Earlier Cyberlights were very simple, based on a color wheel and a rotating gobo,” says Stoner. “Now it has multiple gobos and animation effects in addition to the high color integrity [CRI of 90+]. You can see the difference in the new lighting engine.” The Cyberlight LED has two rotating gobo wheels, each with seven patterns.

An eight-lens system allows for differing impacts from the gobos. According to Stoner, “Its eight lenses are divided over two moving groups of lenses for both zoom and focus. Retaining a significant, historical design feature, the new Cyberlight LED has a long focal length that allows the fixture to produce unique effects when focusing across multiple optical planes. Also, because the two moving groups of lenses include the main lens, or object lens, the fixture is able to more easily achieve sharp focus across a variety of distances without the need for constant lens adjustment.”

Quieter operation and flexibility in how the new version of the fixture can be mounted and connected are also significant improvements that open up possibilities for where and how the Cyberlight LED can be installed, and how it interacts with other elements – all benefits for adapting to the unique needs of attraction design and integration.

O’Donnell says, “Extreme effort went into making the Cyberlight LED as quiet as possible, ideal for performance venues or a dark ride.” Because of the LED and newer fan technology, the Cyberlight LED operates quietly in the background, and the rotating mirror emits practically no noise.

While the Cyberlight can be mounted via a yoke to a rigging fixture, O’Donnell explained that it can also mount behind scenery or in the ceiling, with only a small opening for the mirror. “It is simple to hide,” he says.

O’Donnell adds, “The speed and accuracy of the Cyberlight LED mirror also help make it a perfect fit for attractions. The rotating mirror is able to hit its targets faster than older models, which required rotation on a yoke.” Using a technology called Whisper Home, the mirror will automatically return to the desired start position on startup or at the end of a cycle, a procedure that previously could only be accomplished with a hard restart of the fixture.

Like all High End products, the Cyberlight LED is DMX connectible. “It’s a very simple procedure,” says Stoner. “In fact, it’s as easy as attaching any moving light to a program. You patch into the DMX console, address the fixture, then you have options to run it in DMX mode or not. There are 40 channels in DMX mode.”

Per Stoner and O’Donnell, Cyberlight LED’s profile is slightly lighter but replicates the dimensions of its predecessors, and those who have the older models in place will find them easy to swap out for the newer. “Matching the original Cyberlight’s size makes the Cyberlight LED a perfect option for replacing the existing Cyberlights in your attraction,” says O’Donnell.

“Our clients in the themed entertainment industry are looking for the same quality product they’ve used in the past,” says Stoner. “The Cyberlight LED delivers that, with ease of maintenance, superior performance, and ease of programming. This is the drop-in replacement built around stealth and speed.” • • •

Joe Kleimanhttp://wwww.themedreality.com
Raised in San Diego on theme parks, zoos, and IMAX films, InPark's Senior Correspondent Joe Kleiman would expand his childhood loves into two decades as a projectionist and theater director within the giant screen industry. In addition to his work in commercial and museum operations, Joe has volunteered his time to animal husbandry at leading facilities in California and Texas and has played a leading management role for a number of performing arts companies. Joe previously served as News Editor and has remained a contributing author to InPark Magazine since 2011. HIs writing has also appeared in Sound & Communications, LF Examiner, Jim Hill Media, The Planetarian, Behind the Thrills, and MiceChat His blog, ThemedReality.com takes an unconventional look at the attractions industry. Follow on twitter @ThemesRenewed Joe lives in Sacramento, California with his wife, dog, and a ghost.
Share
Facebook
Twitter
Linkedin
Email
Print
WhatsApp
Pinterest
ReddIt
Tumblr
Previous articleAlcorn McBride: Happiness is a scratch for every niche
Next articleHow Bungalow saved Christmas