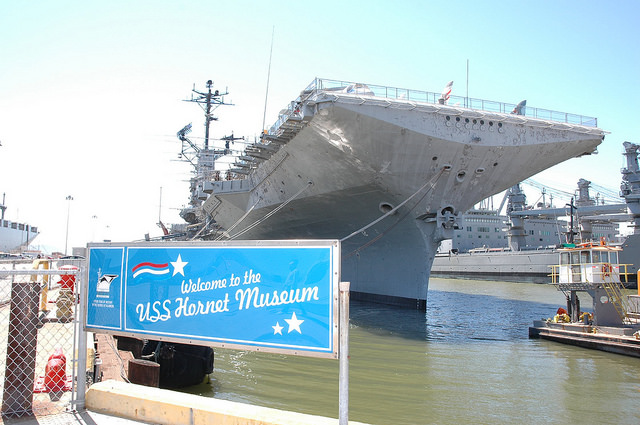 Alameda, CA, USA – The USS Hornet Museum announces the Board of Trustees of the USS Hornet Foundation is launching the first Annual Campaign for the historic aircraft carrier’s Hornet Heritage Fund. The Hornet Heritage Fund is designed to receive financial gifts and donations in order to support the Museum’s operations, restoration efforts, exhibitions, and acclaimed Science, Technology, Engineering, and Math (STEM) educational programs. The purpose of the inaugural campaign, which commences on January 14th, is to raise $800,000 in order to repair and resurface the 100,000-square-foot flight deck and repair two aircraft elevators.

“The Heritage Fund Campaign marks the first significant fundraising effort by the USS Hornet since the mid-1990s, when a determined group of volunteers opened the museum to the public,” said Randall Ramian, Chief Executive Officer of the USS Hornet Museum and Chair of the Annual Hornet Heritage Fund Campaign. “Since then, the USS Hornet Museum been awarded both National Historic Landmark and California Historical Landmark status, and has become a premier destination for those seeking the most authentic, period-appropriate representation of the Naval-Aviation and space exploration traditions on the West Coast.”

The restoration and repair projects are critical to Museum operations. After historic service in WWII, the Cold War, the Vietnam War, and as part of the Apollo 11 and Apollo 12 lunar landings, the USS Hornet was retired from service in 1970. This means that no major structural work has been done on the flight deck or aircraft elevators in nearly five decades. The projects will provide Hornet customers with a better quality visitor experience and allow the Museum to maintain crucial business operations that underwrite a significant portion of its annual operating budget.

“The USS Hornet Museum receives no funds from the U.S. Navy or government,” said Ramian. “We depend solely on business revenues and philanthropic support to operate as one of the Bay Area’s most unique and relevant educational experiences for guests of all ages and from around the world.”

For visitor safety, improved visitor experience, and long-term preservation, the Hornet Heritage Campaign funds will address flight deck issues by caulking cracks to prevent additional drainage onto the original teak deck below the surface, repairing soft spots and weather-damaged sections, weatherproofing, and resurfacing the flight deck –  an area that is about as large as two football fields.

The USS Hornet flight deck is a major attraction, where guests can view a collection of aircraft that currently includes an F-4N Phantom, an F-8 Crusader, an S-3B Viking, and a T-28 Trojan.  Between regular visitors, attendees at special events and Overnight Live-Aboard programs, and guests of private functions, approximately 80,000 people visited the Museum’s flight deck this past year alone.

“At the heart of the Heritage Fund Campaign is our commitment to education. The USS Hornet not only serves as a living history of some of the most significant events in our country’s history, but it also represents a dynamic contribution to our nation’s future through our STEM education program,” said Tom Hyland, the Museum’s Director of Development. “This is an ‘all hands on deck’ opportunity for our supporters to help chart the Hornet’s future and to enable us to inspire future generations for decades to come.”

Joe Kleimanhttp://wwww.themedreality.com
Raised in San Diego on theme parks, zoos, and IMAX films, InPark's Senior Correspondent Joe Kleiman would expand his childhood loves into two decades as a projectionist and theater director within the giant screen industry. In addition to his work in commercial and museum operations, Joe has volunteered his time to animal husbandry at leading facilities in California and Texas and has played a leading management role for a number of performing arts companies. Joe previously served as News Editor and has remained a contributing author to InPark Magazine since 2011. HIs writing has also appeared in Sound & Communications, LF Examiner, Jim Hill Media, The Planetarian, Behind the Thrills, and MiceChat His blog, ThemedReality.com takes an unconventional look at the attractions industry. Follow on twitter @ThemesRenewed Joe lives in Sacramento, California with his wife, dog, and a ghost.
Share
Facebook
Twitter
Linkedin
Email
Print
WhatsApp
Pinterest
ReddIt
Tumblr
Previous article
Ron Miziker, Amy Weisser, and Brian Abelowitz to Present at Thea Case Studies Day at 2015 TEA Summit
Next article
LEGOLAND Florida Announces Hotel Opening Date and New Park Addition