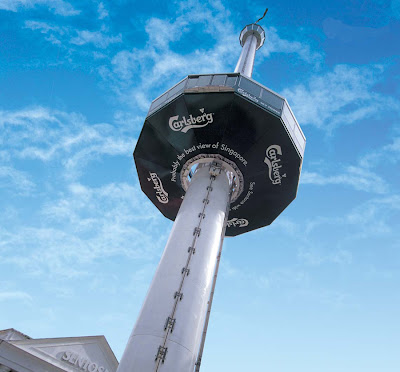 Bremen, Germany (March 19th., 2012) — German ride manufacturer HUSS Park Attractions has announced that it is in the process of building a major observation tower on Weymouth, Dorset, seafront on the south coast of England for Merlin Entertainments.

The tower, which will reach a height of 53m and provide panoramic, 360 degree views over the English channel and surrounding countryside, is due to be completed in time for this year’s Olympic sailing events which are set to take place in Weymouth and neighbouring Portland.

The structure will be built on the town’s Festival Pier and will feature a rotating gondola of 12m in diameter capable of accommodating up to 70 passengers, including guests with disabilities and wheelchair passengers, at one time. The gondola, incorporating floor to ceiling windows around its entire circumference, will rotate around the tower as it ascends and descends.

A total of 29, 60cm concrete piles are being sunk to a depth of 17m at the pier to act as a watertight barrier for the structure’s foundations. When complete, the weight of the attraction will be 130 metric tons.

The total investment of the whole project is approximately £3.5m. An official groundbreaking ceremony took place in January, when work on the 7m deep hole for the tower’s foundations began. UK based Merlin Entertainments, the world’s second largest visitor attractions operator, which is making this significant investment, will be the operator.

HUSS observation towers are available in a range of sizes up to 150m. The Weymouth model will join almost 20 other such structures around the world previously built and installed by HUSS. Among these is the famous Tiger Tower in Singapore and two towers recently erected and about to open in China.

Mirko J. Schulze, CEO of Huss Park Attractions GmbH, said: “It is the first time we have worked with Merlin Entertainments and the whole team is delighted to be part of this important and prestigious project. Everyone at HUSS is working very hard to ensure everything is done in accordance with the client’s wishes and to ensure their full satisfaction. Fabrication of the tower itself and gondola is finished and delivery to Weymouth started on time in early March 2012. We are happy to have established this challenging starting point with Merlin and are looking forward to seeing the HUSS Sky Tower in operation for this major event.”

For Merlin, General Manager Craig Dunkerley said: “The decision to develop the Weymouth SEA LIFE Tower was in part inspired by the spectacular success of the London Eye and subsequent expansion of the Eye brand to also encompass the famous Blackpool and Sydney Towers.”

“We realised there was also an opportunity to develop a network of smaller-scale observation attractions in regional locations where we already operate other successful attractions, which is also in line with our policy of clustering attractions to benefit from cross-marketing opportunities and shared management.

“Weymouth was the logical location to host the first of what we hope will become another global network because it already hosts a successful and still-growing SEA LIFE attraction and also because of its location within the Jurassic Coast world heritage site. The choice of Weymouth to host the sailing events in the forthcoming Olympics merely reinforced this decision and prompted us to go ahead with the project to have the Tower in situ’ this summer.

“Having decided on the location, we looked at the supplier options and because of its experience in the field and excellent reputation within the industry, Huss was the natural choice. They have done everything they promised and as we required and in fact we are bang on schedule to deliver the finished attraction on time, and possibly even a little bit sooner.”
For more information visit www.hussrides.com, call + 49 (0) 421 499 000 or email [email protected]

Joe Kleimanhttp://wwww.themedreality.com
Raised in San Diego on theme parks, zoos, and IMAX films, Joe Kleiman would expand his childhood loves into two decades as a projectionist and theater director within the giant screen industry. In addition to his work in commercial and museum operations, Joe has volunteered his time to animal husbandry at leading facilities in California and Texas and has played a leading management role for a number of performing arts companies. Joe has been News Editor and contributing author to InPark Magazine since 2011. HIs writing has also appeared in Sound & Communications, LF Examiner, Jim Hill Media, and MiceChat. His blog, ThemedReality.com takes an unconventional look at the attractions industry. Follow on twitter @ThemesRenewed Joe lives in Sacramento, California with his fiancé, two dogs, and a ghost.
Share
Facebook
Twitter
Linkedin
Email
Print
WhatsApp
Pinterest
ReddIt
Tumblr
Previous articleNemesis Sub Terra Becomes First British Theme Park Attraction to be Rated by Board of Classification
Next articleCreative Works to Hold Seminar on Laser Tag Operations