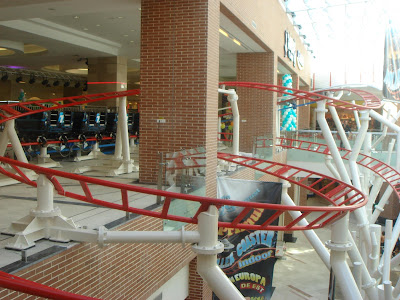 Bucharest, Romania — Italian ride manufacturer IE Park srl has completed one of its most challenging roller coaster projects to date which is the first of its type in the Balkan area.

The ride has been designed and built for Bucharest based Britta, the leading operator of indoor FECs in Romania with two such venues, one at AFI Cotroceni Mall in downtown Bucharest and another at Baneasa Mallo close to the Otopeni Airport. And it is the former location that is home to the new coaster.

Following an excellent start to the operation of the FEC at AFI Cotroceni Mall, company director Lucia Prajisteanu took the decision to expand the ride mix within the venue’s Zorky’s Planet FEC, despite being limited by the physical size of the area available within the mall. The challenge facing both IE Park and Britta, therefore, was how to incorporate a family roller coaster into Zorky’s Planet which has a ceiling height of just 5m. The end result is what can be considered the first indoor, custom-built roller coaster to be installed in the Balkans.

The only practical solution that allowed for a coaster of a particular track length to be incorporated into the mall was to build it off the mezzanine floor on which Zorky’s Planet is situated. Having taken this decision, the route of the coaster and the positions of its support columns necessitated the repositioning of five existing amusement rides/attractions – bumper cars, trampolines, a convoy, mini jets and tea cup – along with a selection of video games and skill games.

A detailed engineering design concept was created by the IE Park technical team in conjunction with structural analysts and civil engineers from the AFI Cotroceni Mall and Britta, resulting in the design of a family roller coaster for the designated area. With a special track design and carefully designed 12m columns, the coaster track is suspended from ‘branch-like’ support sections that come off the main vertical support columns. The total weight of the structure is 32,650kg and all elements have been designed to meet the European Standard EN13814.

The overall footprint of the coaster is 25m x 17m and it features a track length of 125m. The maximum track fluctuation is 5.8m, while the maximum speed reached is 35km/h. With such unique steel structures, the ride train too had to be carefully designed, and again careful collaboration took place to achieve this between IE Park’s designers, sculptors and painters and the client’s Romanian designer. The result is a custom-made, space themed train – Zorky’s Space Train – featuring imaginative paintwork and LED lighting effects. The 16-seater train also has multi-position lap bars for each row of passengers.

Commenting on the installation, Britta’s Lucia Prajisteanu said: “Our company is just four years old but we have worked with IE Park since day one. The roller coaster at Zorky’s was a very difficult project for a number of reasons but we are delighted with the end result. IE Park’s technicians and production department did an excellent job for us, while we have also been extremely happy with the sales and after sales service provided. The mix of product they can offer and the quality is second to none and as we plan further expansions, we certainly intend to continue working with IE Park.”

“This was a particularly difficult project for us to work on,” said IE Park sales director Andrea Munari, “but I am delighted to say that our designers, in conjunction with those of our client, have succeeded in creating an excellent ride despite the very challenging nature of the building and venue we had to work in. We pride ourselves on being able to provide solutions for our clients needs and this is a great example of what we are able to achieve.”

Joe Kleimanhttp://wwww.themedreality.com
Raised in San Diego on theme parks, zoos, and IMAX films, InPark's Senior Correspondent Joe Kleiman would expand his childhood loves into two decades as a projectionist and theater director within the giant screen industry. In addition to his work in commercial and museum operations, Joe has volunteered his time to animal husbandry at leading facilities in California and Texas and has played a leading management role for a number of performing arts companies. Joe previously served as News Editor and has remained a contributing author to InPark Magazine since 2011. HIs writing has also appeared in Sound & Communications, LF Examiner, Jim Hill Media, The Planetarian, Behind the Thrills, and MiceChat His blog, ThemedReality.com takes an unconventional look at the attractions industry. Follow on twitter @ThemesRenewed Joe lives in Sacramento, California with his wife, dog, and a ghost.
Share
Facebook
Twitter
Linkedin
Email
Print
WhatsApp
Pinterest
ReddIt
Tumblr
Previous articleVIDEO: Justice League Alien Invasion 3D
Next articleGateway Ticketing Named Among Best Places to Work in Pennsylvania