Spoken at the IMERSA Fulldome Summit at the Denver Museum of Nature & Science. This is an event within an event: the Fulldome Summit constitutes the “Fulldome Strand” of Symposium 2010 held by the Jackson Hole Wildlife Film Festival. The event is targeted to museum and media professionals and explores tools and techniques and showcases work across multiple formats. In addition to the fulldome sessions and screenings there are sessions and screenings exploring 3D, giant screen cinema and mobile media. The event dates are Oct 26-28 and is being attended by a cross-section of industry professionals: system suppliers, distributors, producers and some exhibitors. The program can be seen here.

At last night’s cocktail reception sponsored by National Geographic, we canvassed a few prominent folk about the convergence of media and content and community that is taking place, from giant screen to digital dome, from planetarium to science center, primarily facilitated by digital media: 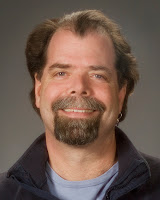 Rick Rothschild of Far Out! Creative and Global Immersion, as well as president elect of the Themed Entertainment Association: “We’ve got a diverse group of people here who benefit from the opportunity to come together and network by way of this event. For instance, there are content producers who have been thinking about digital dome video (fulldome) and this gives them the opportunity to learn more about it. The fresh energy resulting is a tribute to the people who put on the event – they’ve orchestrated an opportunity for something to happen – not knowing exactly what that something will be. It’s a very fresh and appropriate thing to do.”

Rick Gordon of RPG Productions and a board member of the Giant Screen Cinema Association talked enthusiastically about the convergence of media and the desirability of strengthening the relationship between GSCA and IMERSA. There has already been very positive interaction between GSCA and IMERSA including IMERSA sessions at GSCA’s annual Dome Day event.

“We’ve just released Bugs! in 3D for fulldome presentation. The only 3D I ever previously saw in the dome was Echoes of the Sun (originally shown at Expo 90 Osaka, the first 3D dome film) and Into The Deep, a version Graeme Ferguson and I modified so that it could show at Futuroscope (we had to do a lot of shrinks)”…

“3D digital is good and digitally facilitated cross-platforming is good. Certainly they are good for my company. On Feb 1 we expect to commence filiming on the butterfly film [sequel to Bugs], that because of digital media will have a huge additional life beyond its primary release for giant screen theaters. We are now in discussions that I believe will lead to producing a 75 min commercial theatrical release, in addition to the 40 minute special venue film, and probably a 20 minute version for 3D digital.”

Judith Rubin
Judith Rubin ([email protected]) is a leading journalist, publicist, strategist, blogger, content marketing specialist and connector in the international attractions industry. She excels at writing about all aspects of design and technical design, production and project management. Areas of special interest include AV integration and show control, lighting design and acoustics, specialty cinema, digital video and world’s fairs. Judith has ties to numerous industry organizations. From 2005-2020 she ran communications, publications and social media for the Themed Entertainment Association (TEA). In 2013, she was honored with the TEA Service Award. She was development director of IMERSA, and co-chair of the 2014 IMERSA Summit. She was publicist for the Large Format Cinema Association in the 1990s, now part of the Giant Screen Cinema Association (GSCA) and has also contributed to the publications of PLASA, IAAPA and the International Planetarium Society. Already making her mark as a magazine and book editor, Judith joined World’s Fair magazine in 1987, which introduced her to the attractions industry. Launching as a freelancer in the mid 1990s she has contributed to dozens of publications and media outlets including Funworld, Lighting&Sound America, Sound & Communications, Urban Land, The Raconteur and The Planetarian. She joined InPark in 2010. Judith earned a Bachelor of Fine Arts from Pratt Institute. She has lived in New York City and the San Francisco Bay Area, and now makes her home in Saint Louis, where she is active in the local arts and theater community.
Share
Facebook
Twitter
Linkedin
Email
Print
WhatsApp
Pinterest
ReddIt
Tumblr
Previous articleFerrari World Abu Dhabi opens to the public Nov 4
Next articleSaudi pavilion at Shanghai Expo used Sky-Skan digital cinema products