Inside the TEA Summit + Theas 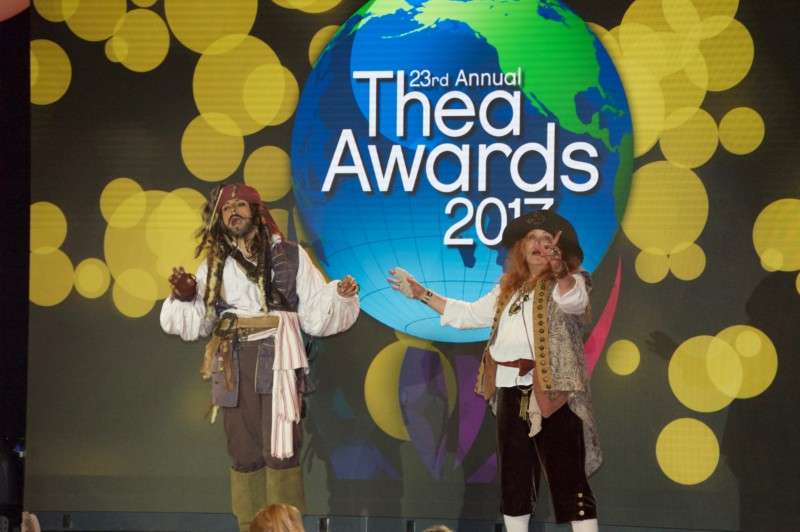 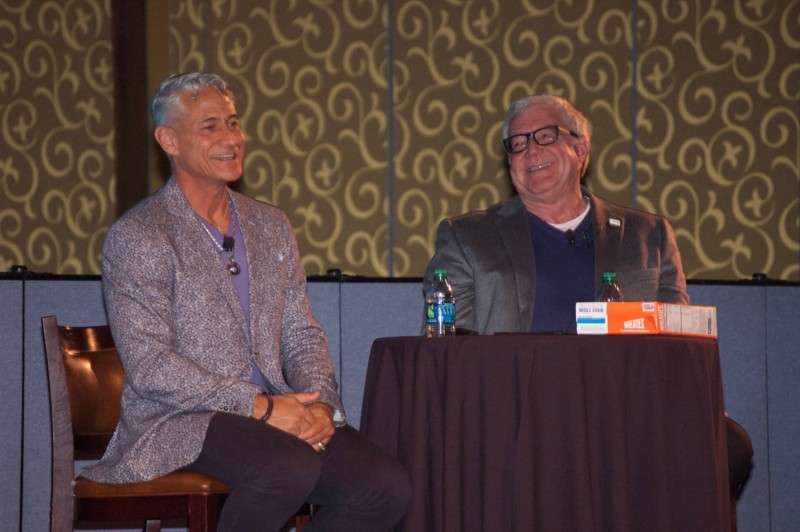 Olympic gold medalist and diving legend Greg Louganis spoke with Kile Ozier during the Summit’s popular “Elephant in the Room” session. Ozier and “Elephants” Co-Chair Steve Birket selected topics to help inform attendees on issues they might not normally consider. Louganis spoke on keeping HIV status a secret and Ozier connected that to current health related concerns for workers traveling to projects in different parts of the world. 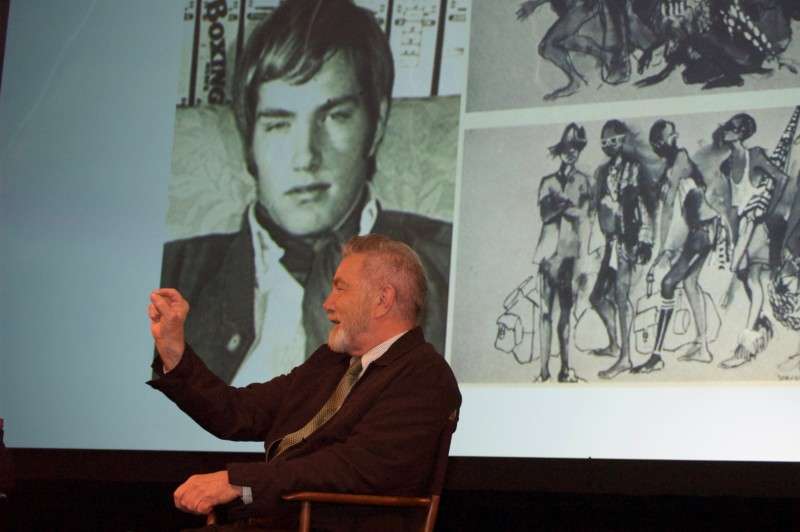 Jeremy Railton, recipient of the Buzz Price Thea Award for a Lifetime of Distinguished Achievements, highlights a key moment from his career during Day 1 of the Summit, while a version of Jeremy from his past gazes down from the presentation screen. 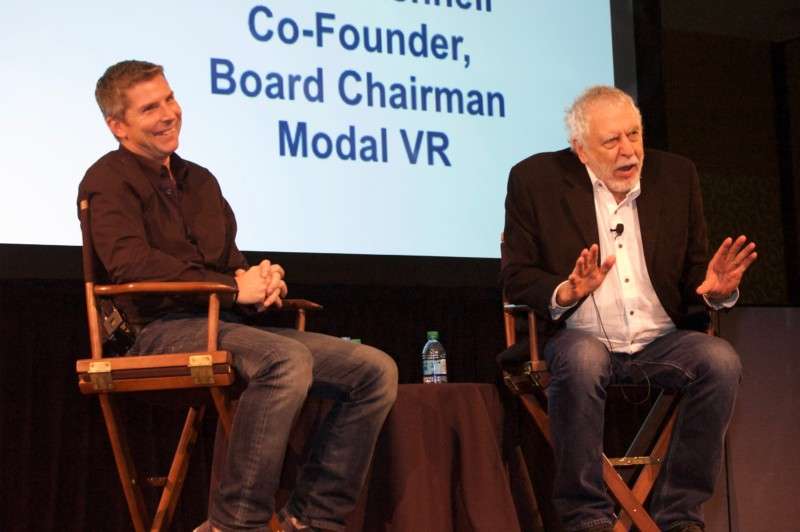 Former Disney Imagineer Bruce Vaughn discussed the future and potential pitfalls of Virtual Reality with Atari founder Nolan Bushnell. Both speakers felt VR would have a permanent home in the themed entertainment market, in parks as well as smaller attractions. 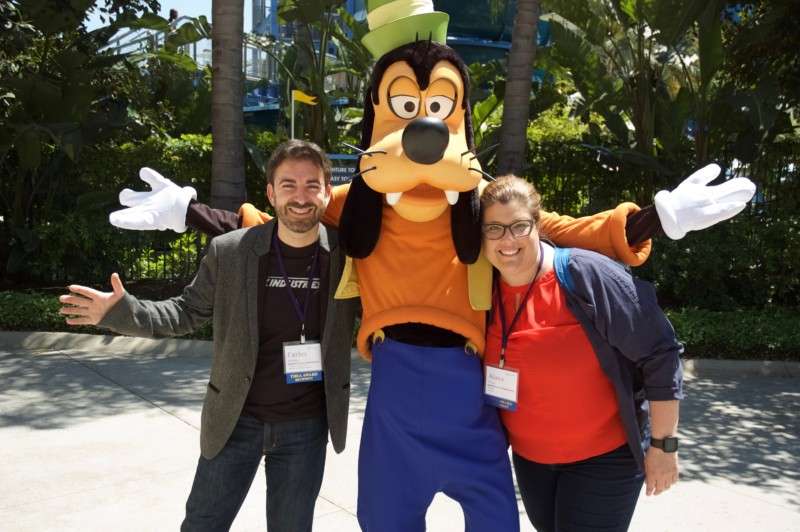 As the Summit and Theas were held at the Disneyland Hotel, there were special opportunities to meet other crazy characters throughout the weekend. Carlos Ortega from the Museum of Latin American Art and Alana Trejo from COTU Media had a chance run in with Goofy on their way to lunch. 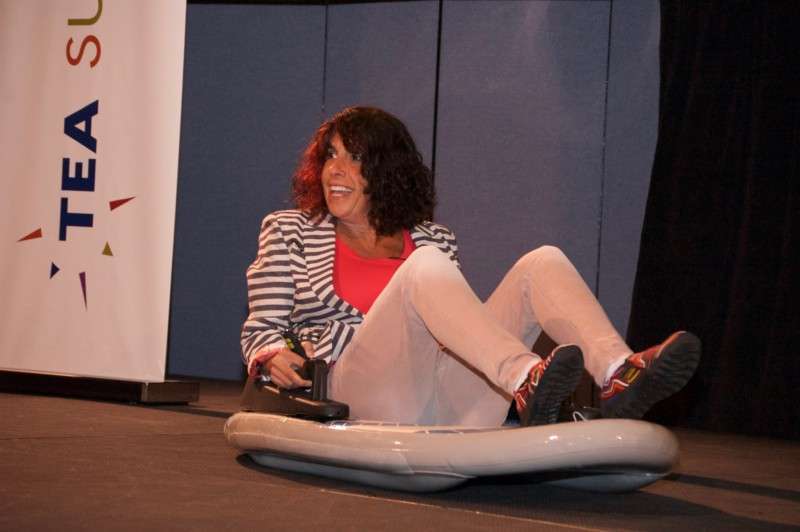 Denise Weston demonstrated the proper riding position while Slideboarding during the Summit. While at WhiteWater, Denise helped develop the Slideboarding concept after watching her son and his friends slap joists on a waterslide to see who had the best accuracy. Slideboarding has since been introduced on a variety of new and retrofitted slides.

“It was really important for me to not just think about the Millennial, but to not forget about Mom,” said Weston. The resulting slideboard is designed for a comfortable ride experience as well as for the gaming elements. 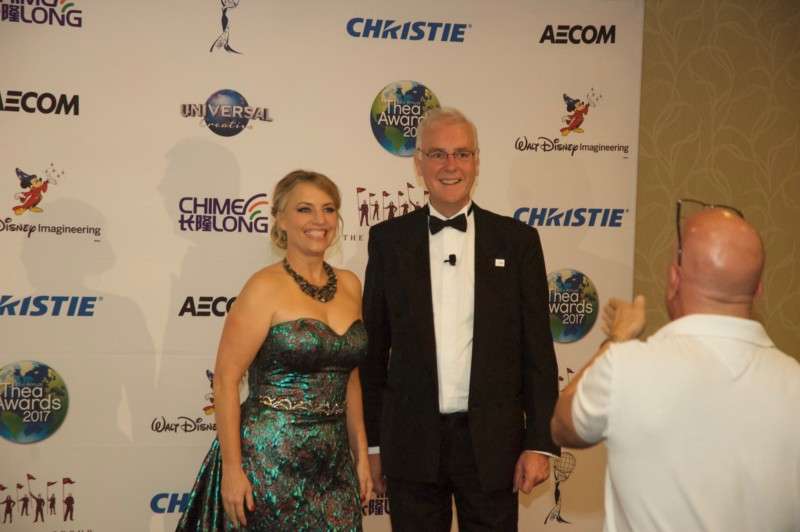 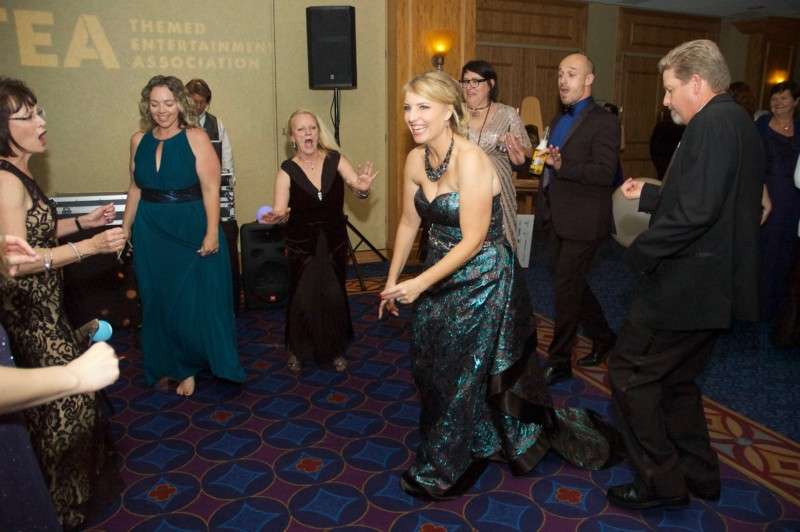 For the first time, TEA hosted an official after party for the Theas outside of the gala ballroom. A DJ ensured the dance floor was active while snacks and drinks provided sustenance for dancers and networkers alike. 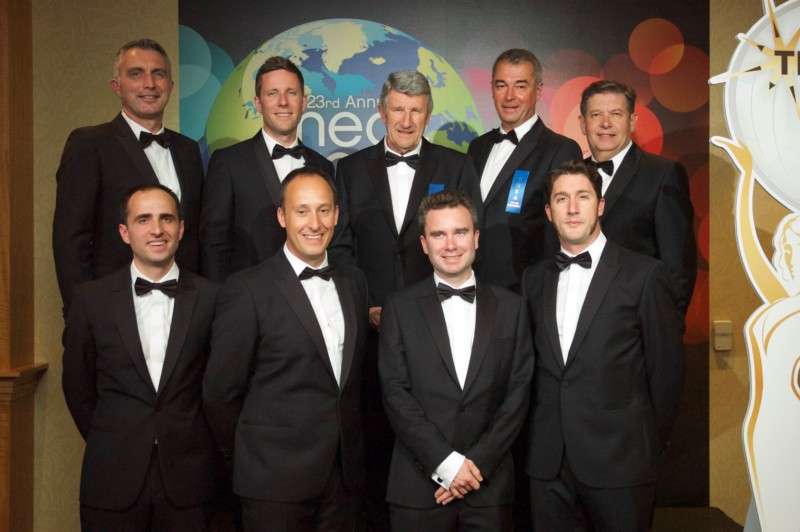 The team from Puy du Fou poses in front of the Theas banner wall before receiving their Thea Award on stage, the park’s third since 2012. The park’s creator, Philippe de Villiers, is pictured in the top row, center. • • •

And the Thea Award goes to…

Joe Kleimanhttp://wwww.themedreality.com
Raised in San Diego on theme parks, zoos, and IMAX films, InPark's Senior Correspondent Joe Kleiman would expand his childhood loves into two decades as a projectionist and theater director within the giant screen industry. In addition to his work in commercial and museum operations, Joe has volunteered his time to animal husbandry at leading facilities in California and Texas and has played a leading management role for a number of performing arts companies. Joe previously served as News Editor and has remained a contributing author to InPark Magazine since 2011. HIs writing has also appeared in Sound & Communications, LF Examiner, Jim Hill Media, The Planetarian, Behind the Thrills, and MiceChat His blog, ThemedReality.com takes an unconventional look at the attractions industry. Follow on twitter @ThemesRenewed Joe lives in Sacramento, California with his wife, dog, and a ghost.
Share
Facebook
Twitter
Linkedin
Email
Print
WhatsApp
Pinterest
ReddIt
Tumblr
Previous articleiconpath: Devouring With the Eyes
Next articlePanasonic: Connected Solutions