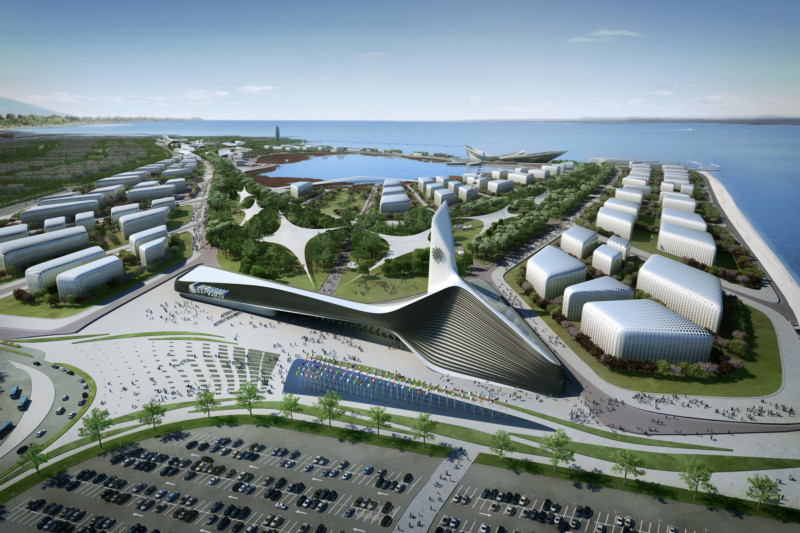 With two Asian world expos now past – the 3-month Yeosu Expo 2012 in Korea, and Shanghai, China’s huge, 6-month Expo 2010 – the largest international exposition in history with an attendance of over 70 million, breaking the attendance record held for over forty years by Osaka, Japan’s Expo ’70 – all eyes are on Milan, Italy’s plans to host Expo 2015. Buffeted by strong headwinds in the aftermath of the global financial meltdown and by domestic political upheaval, Milan now appears to be picking up organizational momentum and has signed up 118 official participants as of January, 2013. In a sign of the times, the first corporate participant announced is not a home-grown Italian company, but rather a Chinese real estate development company.

Next up after Milan: Astana, Kazakhstan has been selected – beating out Liege, Belgium – to host the next smaller, 3-month expo in 2017. Kazakhstan, the world’s ninth largest country by land area, became independent from the Soviet Union in 1990, and Astana was designated to become the new country’s capital in 1995. Bolstered by economic wealth from oil, numerous projects have been undertaken to make the city not only the capital of Kazakhstan, but also of Central Asia.

Edmonton, Canada had been a favored candidate for 2017, but after several years of studies, with mostly favorable community support throughout the process, abruptly dropped out of the bidding when the Premier of Canada announced that Her Majesty’s Government (i.e. the national Government) would not support the bid.

November 2012 was a busy month for the five cities bidding to host Expo 2020. Dubai, UAE; Izmir, Turkey; Sao Paulo, Brazil; Ayutthaya, Thailand; and Yekaterinburg, Russian Federation all submitted large bid books (in excess of 600 pages each) in their quest to host the next big Expo. A decision as to which city will be approved by the BIE (the Bureau of International Expositions, the treaty organization which oversees the sanctioning process and promulgates and administers the procedures which govern hosting Expos) will be made in November 2013.

So, with all of this activity, it appears that the practice of hosting world’s fairs is thriving, and that nations and cities around the world continue to see value in this exercise in cultural exchange and nation branding whose history dates back over a hundred years to the Crystal Palace Exposition (the first world expo, held in London, England in 1851). Taking a long view of the Expo medium in the context of mega-events, several developments and trends can be cited as having influenced modern day practices and outcomes:

Geographical location: After Brussels’ Expo ’58 resumed the practice of hosting expos after a hiatus of several years during WWII, there were a number of the events held in North America, mostly in the U.S., with two in Canada (Montreal ’67 and Vancouver ’86). Vancouver 86 was the last one to have been held in North America, and since then, Europe and Asia, including Australia, have been the primary promoters and hosts of expos. With the selection of Astana over Liege, it appears that the BIE’s internal site selection criteria – which seek to give recognition to regions that haven’t hosted an Expo recently – is taking hold.

BIE membership and international participation trends: The current membership of the BIE stands at 161 countries. This represents a dramatic uptick: as recently as 2002 when Shanghai 2010 was sanctioned, membership stood at just 88. With the membership of the United Nations at 192 nations, the BIE could, arguably, add another 30 members in the future. This historically high level of membership has important bearings on participation at expos and the sanctioning process. Since Spain’s Expo in Seville in 1992, there hasn’t been a world’s fair that has attracted fewer than 100 nations. While this is an impressive statistic and speaks to the increasingly international nature of Expos, it should be borne in mind that many of the newer members of the BIE are relatively small nations and may be characterized, from many points of view, as developing countries. Thus, while the number of participants at Expos has gone up, the average size of the exhibits has gone down. From a qualitative point of view, the visitor experience at a modern day Expo is not the same as it was 20 years ago when fewer, larger – not to mention, more expensive – exhibits were on view. In the spirit of assisting smaller, economically disadvantaged countries to participate, the BIE now requires bidders for future events to provide an accounting of the amount and types of support and assistance, such as transportation, accommodations, etc. that will be available to them in the role of Expo host. While financial assistance has been a factor in the past, this current requirement gives greater transparency to the practice, while formalizing additional financial requirements on a prospective host country which, in the past, were negotiable.

A final issue arising from the increased level of BIE membership is the approval process. The basic method by which a host city is selected is through a vote of the BIE membership. In past years, groups of countries could be encouraged to support a particular bid and, voting blocs might be counted upon to deliver a mostly unified vote. With the high number of countries now voting – many for the first or second time – the relatively large number of cities vying to host any given year creates an atmosphere for lobbying which is both unprecedented and demanding.

Recognized Expos: Starting with Zaragoza’s Expo 2008, the BIE changed the classification of the smaller Expos, formerly “Specialized” or “Category II” events, to “Recognized” Expos. “Recognized” Expos have a maximum duration of three months, whereas the previous “Specialized” Expos were allowed up to six months. In addition, for a “Recognized” Expo the area occupied by the International Participants who are accommodated in organizer-built space, is to be no larger than 25 Ha. (60 Ac.). Both of these changes are based on a desire to reduce costs for both organizers and participants. However, with Zaragoza and Yeosu now having tested the new rules, some feel the 3-month duration is too short for an event of this scale to gain market share. Likewise, the aforementioned space limitation has resulted in buildings which, in order to accommodate all of the participants, are two-stories in height, with a basement for storage and services. This configuration does reduce the overall building footprint, but the added costs of 2- and 3-story structures may be counterproductive.

Finally, no survey of the world of Expos would be complete without some mention of the oft-asked question: Why hasn’t there been an Expo in the United States for more than 25 years? The simple answer is that the U.S., for a variety of reasons, dropped out of the BIE in 2001 and in order for a city to bid to host an Expo, their country has to belong to the BIE. Regardless, there was a U.S. pavilion at the expos in Yeosu, Shanghai and Aichi, Japan (2005). These U.S. Pavilions were funded and supported by the private sector under the direction of the U.S. Government. (Truth be told, the participation of many countries at Expos is basically funded by private sector entities, so, in that regard, the U.S. is consistent with the approach taken by some other countries.)

Several cities have, over the past decade or so, formulated ambitious plans to get the U.S. back into the BIE and host an expo, only to fade away as needed funding and political support dematerialized. While the U.S., from time to time, does bid on the large international sports events such as the Olympics and World Cup, the lack of a formal U.S. pro-Expo organization with the continuity of mission and financial support needed to get political attention, makes it difficult for a city or even a region to mount an effective campaign to get the U.S. back into the expo game. Perhaps the fact that an expo, in a country as large and diverse as the U.S., is more of a city or regional project than a national one is at the heart of the problem. • • •

Gordon Linden is a consultant trained in architecture and business, with over four decades of experience in the planning, design and implementation of urban and regional projects. He is author of “The Expo Book” (www.theexpobook.com).