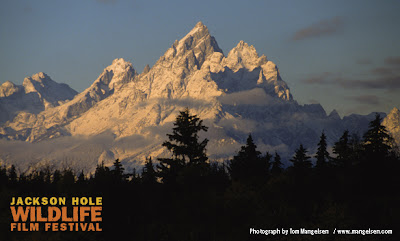 The International Forest Film Festival competition, launched by the  Jackson Hole Wildlife Film Festival and the United Nations Forum on  Forests Secretariat, announced the winners  selected from over 160  films that were considered in six categories of competition. Films from more than 30 countries were screened and evaluated by more than fifty preliminary judges who selected finalists for consideration by the final jury.

Winning films will be showcased at the United Nations’ global launch of the International Year of Forests, on February 2 in conjunction with the High-Level Segment of the ninth session of the United Nations Forum on Forests. The Forum has universal membership, and is composed of all 192 Member States of the United Nations. The launch of Forests 2011 will be streamed live from UN Headquarters, and feature a program of high level speakers, including Nobel Peace Prize winner, Wangari Maathai  and Nobel Laureate Elinor Ostrom, as well as the premiere of Forest, a short film directed by Yann Arthus-Bertrand as well as clips from the winning films of the International Forest Film Festival.


Best of Festival
The Queen of Trees
Deeble & Stone Productions, NHK, Thirteen/WNET, BBC, Granada International,  ZDF in association with Kenya Wildlife Service
This is My Forest
Awarded to the film that tells the most moving personal expression or story of the forest.
Conflict Tiger
Sasha Snow Film Production

Living Forests
Awarded to the film that most effectively showcases the rich diversity (including forest biodiversity) and complexity of the forest ecosystem.
Kingdom of the Forest
Parthenon Entertainment, Ltd., Nautilusfilm

Issues & Solutions
Awarded to the film that most effectively communicates solutions to environmental and sustainability issues facing forests and their inhabitants, including people.
Hope in a Changing Climate
Environmental Education Media Project (EEMP)

Forest Hero
Awarded to the film that most effectively celebrates the work of individuals or groups committed to forest research and sustainability.
Climbing Redwood Giants
National Geographic Television

Shorts
Awarded to the best forest film of less than 15 minutes in length.
Nom Tew (Man of the Soil)
Deschamps Corporation

Awarded to recognize the inspiration and impact an individual can make on the world.
The Man Who Stopped the Desert
1080 Film & TV, Ltd.

Awarded to recognize an outstanding integration of the historical, biological and cultural elements of the Amazon Basin rainforest.
Amazon Alive: Jungle of the Mind
Light & Shadow, GmbH

The International Forest Film Festival is a key part of the outreach efforts of Forests 2011 is an initiative to provide compelling content to organizations and schools throughout the world to raise awareness on the importance of forests, their relationship with people and the planet we share, and consequently, to inspire a sense of personal responsibility/stewardship for a greener, more equitable, sustainable future.
Find more articles: InPark Magazine archive
Subscribe free: InPark digital edition

Judith Rubin
Judith Rubin ([email protected]) is a leading journalist, publicist, strategist, blogger, content marketing specialist and connector in the international attractions industry. She excels at writing about all aspects of design and technical design, production and project management. Areas of special interest include AV integration and show control, lighting design and acoustics, specialty cinema, digital video and world’s fairs. Judith has ties to numerous industry organizations. From 2005-2020 she ran communications, publications and social media for the Themed Entertainment Association (TEA). In 2013, she was honored with the TEA Service Award. She was development director of IMERSA, and co-chair of the 2014 IMERSA Summit. She was publicist for the Large Format Cinema Association in the 1990s, now part of the Giant Screen Cinema Association (GSCA) and has also contributed to the publications of PLASA, IAAPA and the International Planetarium Society. Already making her mark as a magazine and book editor, Judith joined World’s Fair magazine in 1987, which introduced her to the attractions industry. Launching as a freelancer in the mid 1990s she has contributed to dozens of publications and media outlets including Funworld, Lighting&Sound America, Sound & Communications, Urban Land, The Raconteur and The Planetarian. She joined InPark in 2010. Judith earned a Bachelor of Fine Arts from Pratt Institute. She has lived in New York City and the San Francisco Bay Area, and now makes her home in Saint Louis, where she is active in the local arts and theater community.
Share
Facebook
Twitter
Linkedin
Email
Print
WhatsApp
Pinterest
ReddIt
Tumblr
Previous articleNational Geographic’s Star Clock BC – the Antikythera Mechanism and Mad Systems
Next articleUS State Department issues RFP for a pavilion at Yeosu Expo 2012