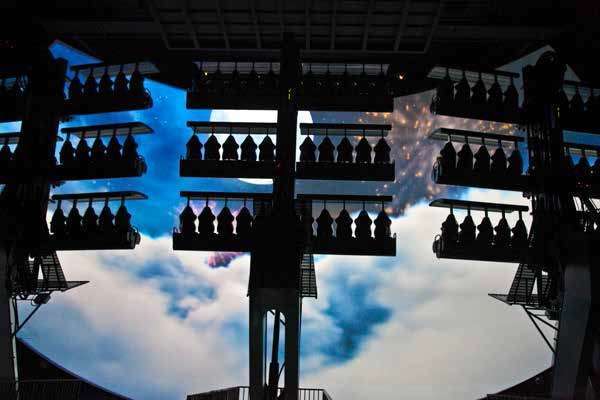 How special venue is reacting to advancing mainstream cinema

ABOVE: Electrosonic, Super 78 Studios and Huss Park Attractions collaborated to create the media-rich “Flight of the Dragon” attraction for Happy Valley and Window on the World parks in China. Photo courtesy of Electrosonic

Crisp, vivid images jump off the screen in 3-dimensional space that reaches the very tip of your nose as your body is bounced, shaken, poked, and even tickled in perfect unison with what you see. The action is further matched by well-timed spritzes of water and an amalgamation of aromas – all serving to completely immerse you into the story of the theme park attraction you are enjoying . . . or is it a theme park attraction?

Experiences like this were once the exclusive domain of world-class theme parks, but now you find them colonizing outside of the ticket booths, working their way into our neighborhood theaters, and even our living rooms. The question is: What can theme parks do to keep ahead of the curve?

The recent Avengers movie had 3D, a fast story tempo, and special effects that left you feeling much as though you had been on a feature-length theme park ride. As Rick Heineman, Senior VP at RealD, global licensor of stereoscopic technologies to motion picture exhibitors, sees it, “this is a new era for 3D technology. The difference from just the last ten years is staggering. There are so many products that didn’t even exist before. Single-projector technology eliminates substantial maintenance costs, for example. This opened the door to cinemas.” This cost savings, Rick points out, is a sliding scale that benefits everyone down the line. “This reduces the cost for theme parks as well, which creates the opportunity to add projection where it might not have been cost-effective before. A thrill can be affordably created virtually that would otherwise be impossible to build. We are just at the beginning of what virtual rides can become.”

But as costs drop, will Hollywood stop at 3D? Can 4D effects simply be added to a typical feature film without consideration of the effect it will have on the storytelling? Themed attractions that use 4D effects are carefully and painstakingly crafted by teams of experts who execute their integration from the very beginning of the process ensuring a union between the story, content, visuals, and 4D elements. To retroactively add-on this technology may have a jarring and distracting impact that leaves audiences unsatisfied.

A recent LA Times article discussed one company’s efforts to implement a 4D system into theater chains, focusing on the introduction of motion-based seats. The article explained how the programmer, “studied the ‘point of view’ of [a crashing] alien ship when deciding how best to insert effects, raising the question, ‘should the seats rock side to side or sway back and forth to simulate the ship’s fall?’” This is the kind of question that exemplifies the challenge of 4D outside the world of themed attractions. As an audience member, why am I feeling a physical sensation related to what I’m seeing on the screen? Am I on the ship that’s crashing? Am I on the ground outside? Or am I just a guy in a theater watching these images on a screen – in which case, why is my chair moving at all? 4D effects of this nature obtrusively force the viewer into a role within the movie that the original filmmaker likely never intended. This unintentionally puts an incredible amount of storytelling power into the hands of the 4D programmer, possibly to the detriment of the story itself. It’s complicated.

Some companies, like MediaMation, a leader in interactive attraction technologies, are embracing these opportunities outside the theme park gates, and don’t delve much into the issue of who controls the storytelling. CEO Alison Jamele believes there is still plenty of room in the media market for a wide range of experiences. They are installing a line of interactive theater seats in over 30 countries and have a spectrum of “bells and whistles” to offer. “The immersive experience is going to be happening everywhere, from home to theaters to theme parks. But there is a vast difference between how each experience is executed. You don’t want a short theme park experience translated into a 2-hour feature film, for example. A theme park attraction can be much more dramatic because you are subjected to it for a shorter period of time.”

According to Janine Baker, senior VP at nWave Pictures, a world leader in 3D cinema content production, differentiating the theme park experience from its competition lies in the quality offered. “The first rule is you must keep up with the technology in the local cineplex – the quality must be better than what you can get locally,” says Janine. “Next, your film quality, in terms of content, has to be at a high level. The projector can only be as good as the content being projected.” Janine also points out the higher standard that video “gamers” have come to demand. “If you’ve seen the games, the graphics are so visually amazing, they are hypnotizing. If you don’t keep to that quality, you are going to lose the audience.”

Though home-based and local media venues continue to evolve, they are hampered by limitations that theme parks do not face. Some kinds of media applications are not likely to lend themselves to theaters in the home or neighborhood cinema entertainment any time soon, but you never know when a door might slam shut. Theme designers must seize available opportunities to push media-based attractions to their full potential. Although media is sometimes used to prop up an attraction suffering from an abbreviated budget or creative shortfall, our industry boasts plenty of innovators on all sides.

Daren Ulmer, founder of Mousetrappe, a leading producer of media for themed attractions, contributed to the Cinderella Castle projection mapping at Disneyland that was honored with a Thea Award earlier this year. He sees ample room for creative growth. “We are constantly finding new ways to surprise the audience through clever, new applications of the original media content in combination with the ever-advancing technological capabilities. Theme park operators are realizing that the technology is there to use the entire environment around the guests without being limited to flat screens inside rides and shows. This creates a whole new canvas for the content and the projection alike.”

Dina Benadon, CEO of Super 78 Studios, a storytelling, design and animation company, is former Vice Chair of the Producers Guild New Media Council. She believes there are fewer obstacles to new ideas than ever before. “It’s a very exciting time because we are pushing forward into a digital age that can keep up with the creativity that’s driving it. Our capabilities have come a long way from early attractions like Star Tours and Back to the Future. Their success helped catapult media to the forefront where it has become the cornerstone to some of the most successful recent attractions.” Dina points out, however, that, “the key is to bring in the right producers who truly understand the technology – as early as possible.”

Perhaps there is no more logical application of 3D to an attraction than the refreshed Star Tours – The Adventures Continue at Disney parks, also honored with a Thea Award this year. Here, 3D is used to give depth where depth was always meant to be. Thanks to this technology, no longer are audiences asked to suspend their disbelief and accept that the flat, 2D image on the screen at the front of the cabin is, in fact, a window to the outside. This is a perfect example of how, rather than simply relying on 3D as a gimmick, the attraction subtly uses it to coalesce the overall story.

Bryan Hinckley, Entertainment Development Manager at Electrosonic, a prominent AV systems integration company, recognizes the threats that theme parks face. “We are in competition with all forms of entertainment. The spread of 3D, [and now 4D] to homes and theaters is just another competitive element alongside mobile devices and social media.” But the advantage that theme parks have, Bryan explains, is that they can “take every experience to an extreme level by completely immersing visitors into the story.” Theme park budgets are unique in that they have the capability to push design aspects such as image and projection quality, screen size, and the integration with themed environments.

“Technology has progressed so far in recent years that images can now be projected on almost any surface, of any size and shape. Advanced speaker design and audio processing allow sound to be controlled and focused to create complex and unique audio soundscapes. We constantly push the technology to meet the imagination of the designers. With a strong story, a unique environment, and creative use of technology, theme parks create experiences that you just cannot get locally or in your living room.”

Of future media-centric attractions, one thing is clear: The days of media for media’s sake are behind us. Designers must delve as deeply into their technological toolboxes as they do their creative minds to concoct new recipes for experiences in which media is just one of many key ingredients. • • •

George Walker ([email protected]) is a creative consultant, show writer, and in-field art director who aims to strike a balance between innovative ideas and realistic build-ability. In addition to his writing for other projects, George was thrilled to have the unique opportunity to work this past year as a rock carver on Cars Land. George also sits on the Education Committee for the Themed Entertainment Association.

Looking back on looking forward

Joe Kleimanhttp://wwww.themedreality.com
Raised in San Diego on theme parks, zoos, and IMAX films, InPark's Senior Correspondent Joe Kleiman would expand his childhood loves into two decades as a projectionist and theater director within the giant screen industry. In addition to his work in commercial and museum operations, Joe has volunteered his time to animal husbandry at leading facilities in California and Texas and has played a leading management role for a number of performing arts companies. Joe previously served as News Editor and has remained a contributing author to InPark Magazine since 2011. HIs writing has also appeared in Sound & Communications, LF Examiner, Jim Hill Media, The Planetarian, Behind the Thrills, and MiceChat His blog, ThemedReality.com takes an unconventional look at the attractions industry. Follow on twitter @ThemesRenewed Joe lives in Sacramento, California with his wife, dog, and a ghost.
Share
Facebook
Twitter
Linkedin
Email
Print
WhatsApp
Pinterest
ReddIt
Tumblr
Previous articleHumans of all kinds invited to visit the animal metropolis of Zootopia at Shanghai Disneyland’s newest land
Next articleCinemark partnering with SPACES to provide immersive VR experience