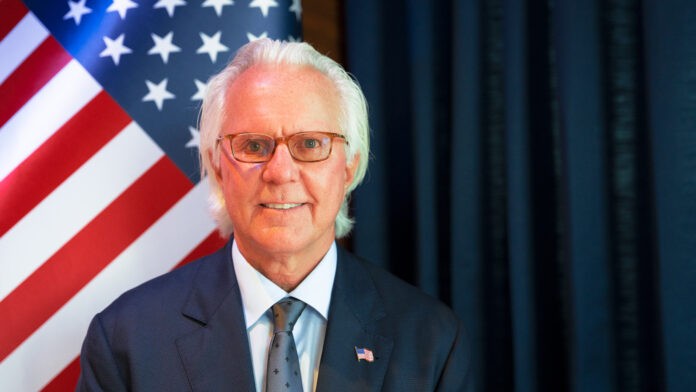 by Jim Ogul and Judith Rubin

Expo 2020 Dubai opened its gates to the public and began its six-month run October 1, 2021, having rebounded from delays and changes due to the COVID-19 pandemic, and retaining the “2020” title. Expo 2020 Dubai has official World Expo standing with the Bureau of International Expositions (BIE – the Paris-based body that regulates these events) and makes history as the first world’s fair hosted in the MENA region (Middle East, North Africa, or South Asia).

The United States is one of the official international participants at Expo 2020 Dubai. The theme of the USA Pavilion is “Life, Liberty, and the Pursuit of the Future.” The pavilion features an immersive media show exploring American technical innovation, a space travel display including a moon rock, Martian meteorite, a Mars Rover prototype and a replica of a Space X rocket and a program of U.S. cultural performers and speakers.

Robert G. Clark is the United States Commissioner General heading up the USA Pavilion at Expo 2020 Dubai, on behalf of the U.S. State Department. Clark grew up in St. Louis, Missouri, a storied city of the American heartland which in 1904 hosted a landmark world’s fair of its own, with a legacy still tangible. Prior to his diplomatic career, Clark was executive chairman of Clayco, a leading design-build company he founded in 1984 in St. Louis.

In this exclusive interview, Clark talks to InPark about the Dubai expo, the message of the USA Pavilion and his St. Louis roots.

About the interviewers: Jim Ogul played a key role in the US presence at world expos over a 30+ year career at the U.S. State Dept. He writes extensively on the subject for InPark, including an e-book about US Pavilions at world’s fairs. InPark editor Judith Rubin has covered world expos since 1987 and is a resident of St. Louis.

What’s your general experience of this Expo so far?

My impression is that the overall effort and theme for the Dubai Expo are terrific. As the first event of its kind in the Middle East and the biggest event ever in the United Arab Emirates, it is being carried out with exactly the right kind of support and vision from the UAE leaders.

As Commissioner General of the USA Pavilion, I’m committed on a daily basis for the entire event. My wife Jane and I have relocated to Dubai and are thrilled by the reception and hospitality of our hosts. I have met many of the other commissioner generals and there is a strong bond felt among us to put on the most collaborative effort ever for an Expo.

Why is it important for the US to participate in world expositions?

The USAP theme of “Life, Liberty and the Pursuit of the Future” is just part of the story. Values, ideas, culture and innovation can be felt and seen throughout the experience.

World expos have been and continue to be significant as not only a place to do commerce and share cultural exchange, but more importantly as an opportunity to find common bonds of friendship and cooperation. They leave a physical and cultural legacy. I grew up in St. Louis and the impacts of the 1904 world’s fair there are still felt and still visible.

How have your personal and professional life and St. Louis background made you feel connected to world expos?

Growing up in St. Louis, you automatically hear of the 1904 world’s fair and all the amazing things that came from it. Part of that living legacy is the building that became the St. Louis Art Museum in Forest Park, which was the main fairgrounds – and the Washington University campus, which was transformed by the fair. But I also feel very connected as an entrepreneur who started my own business when I was 25 years old; Clayco is today one of the largest construction companies in America. My own story is a classic story of American opportunity and entrepreneurship. The American dream is alive and well – as expressed at the expo in the USA Pavilion.

Can the 1904 world’s fair in St. Louis, of more than a century ago, still stand as a model for what an expo can do today?

Yes, because all world expos share something at the heart. They are about innovation, cultural shifts and changes, and the other dramatic human concepts that grow out of gathering in one large place – with all the nations joining to show that we can do more together than we can apart.

You recently stated, “One of my missions going forward….is to educate the United States Congress, on both sides of the aisle, to the benefits of participating in the Expo.” Why is this important?

Our national pavilion at a world expo should be a non-partisan effort to support the important message of freedom across the globe – in a forum that sees millions of visitors and many, many high-level official visits from, in this case, 192 nations. It’s just untenable to think the USA would not be represented. I think the State Department has done a terrific job with this expo and has built in some muscle memory for efficiently delivering a high-quality experience with a powerful message going forward.