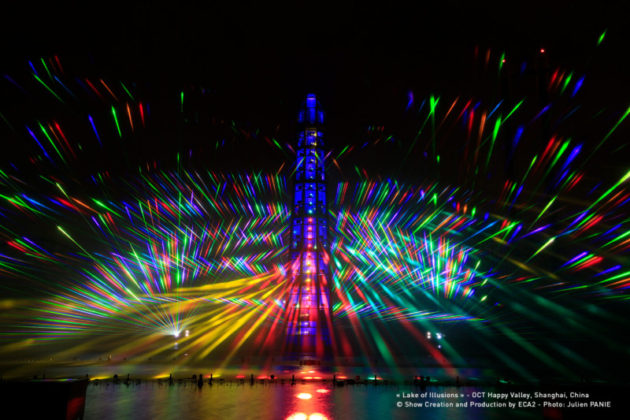 Why did you select ECA2 for this project?

Feng: The first reason is because ECA2 is a world-class multimedia show producer. They created many great shows, and we had the opportunity to go to South Korea and Sentosa to see two of them (The Big O Show and Wings of Time).

The second reason is because ECA2 has already worked with other departments of OCT. When we wanted to create a fantastic and new show for our park, ECA2 was the company that came to mind.

How do you expect the show to impact the park?

Feng: Since our park is quite far from downtown Shanghai, we only had the park open until 6pm for half of the year and until 9pm the other half. Our goal with the show is to make our audience stay longer in the park and improve the park experience.

By adding this show along with all the other attractions and rides at night, we are aiming for the operation time to be longer at night so our guests can fully enjoy themselves not only at day but at night.

What was the development process like between the ECA2 designers and the Happy Valley construction team?

Bin: Our collaboration has been seamless. Since the beginning of the project, we started on the traditional Chinese elements as the focal point of the show, combined with the very modern technology ECA2 is experienced with.

We had many detailed discussions on the show script, including where and how the effects are placed during the show, the music, lighting and architecture of the show, and the voice-over text as well. Of course, in art there is no best, only better, so we will keep working on improving the show.

What do you see as the biggest trend in the Chinese attraction industry?

Feng: The market in China has been developing. There was a 5% attendance increase compared to 2014. And when you look at Asia Pacific the percentage increase is much more than the global increase, and most of that increase is due to China.

In my over 30 years of experience operating theme parks, I can say that all the [Chinese] parks have been a true success — in 2015 there were more than 30 million guests at OCT parks.

I also see an increased role for global theme parks. Disney has chosen Hong Kong and Shanghai, Universal has chosen Beijing, and Six Flags has chosen Haiyan and Chongqing. It means the big chains are expecting a lot from the Chinese market. China is a growing market due to our economic growth and the increasing income of Chinese.

How does OCT feel about Disney arriving in mainland China?

Feng: We are not afraid because history indicates that where there are Disney parks other theme parks have also been successful, like in Orlando, Hong Kong, Japan, and Los Angeles. Even since Disneyland Shanghai has already opened, our recent operation has been successful.

Joe Kleimanhttp://wwww.themedreality.com
Raised in San Diego on theme parks, zoos, and IMAX films, InPark's Senior Correspondent Joe Kleiman would expand his childhood loves into two decades as a projectionist and theater director within the giant screen industry. In addition to his work in commercial and museum operations, Joe has volunteered his time to animal husbandry at leading facilities in California and Texas and has played a leading management role for a number of performing arts companies. Joe previously served as News Editor and has remained a contributing author to InPark Magazine since 2011. HIs writing has also appeared in Sound & Communications, LF Examiner, Jim Hill Media, The Planetarian, Behind the Thrills, and MiceChat His blog, ThemedReality.com takes an unconventional look at the attractions industry. Follow on twitter @ThemesRenewed Joe lives in Sacramento, California with his wife, dog, and a ghost.
Share
Facebook
Twitter
Linkedin
Email
Print
WhatsApp
Pinterest
ReddIt
Tumblr
Previous article
THE WEBER GROUP: In Memoriam
Next article
eca2: Lighting up the night