InvadR: Down to the last nut and bolt 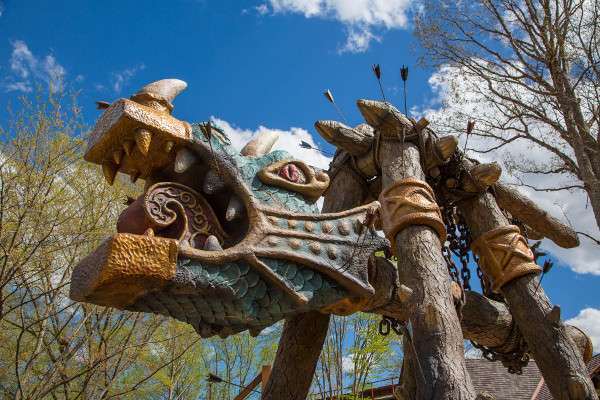 After a centuries-long slumber, Vikings have awakened and attacked the French colonial settlement of New France. A battering ram has torn down the village stockade, and guests to Busch Gardens Williamsburg (BGW) join the epic battle aboard Viking ships or the villagers’ boats aboard the park’s new wooden roller coaster experience, InvadR.

Busch Gardens Williamsburg opened in 1975 on 373 acres of land in Virginia. Its theming represents Western European nations Great Britain, Germany, Italy, Ireland, and France. The French area of the park has two distinct areas: one represents the provincial village of Acquitaine, and the other New France, the French colonial settlements that became modern-day Canada.

Historically, the Viking era ended in the late 11th Century, while the first permanent French settlements in the territory called New France would not be established for another 600 years. At Busch Gardens Williamsburg, this lapse of time didn’t pose a problem. This is, after all, a park that over the years has been home to fairies, ghosts, and woodland spirits, so bringing Vikings into the mix wasn’t too far-fetched. Previously frozen in time, they have now awakened from their slumbers and attacked the trading settlement unannounced.

“The ‘lost in time’ concept goes back [at least] 200 years to Washington Irving and Rip Van Winkle, so it was a pleasure to have a spin at it in creating an attraction,” said White. “We just dove right in …. pretty much like
angry, disoriented Vikings who finally broke free of the ice in Newfoundland after 700 years and took out their frustrations on the unfortunate French settlers of New France. The time periods didn’t really have to ‘combine,’ per se, but rather the Vikings just had to burst in. We understood the challenge of merging the colorful, Nordic patterns in the Viking sections with the duller rustic wood of the frontiersmen. It is not only a battle for survival for the two parties, it was also an artistic battle of two styles, jockeying for attention and supremacy from the two competing ride vehicles, the graphics hanging throughout the attraction, and even the props and weapons scattered about.”

Blending into the neighborhood

White’s concept for the entrance involved a 20-foot tall battering ram crashing through the gates of New France’s protective stockade. Guests walk through the broken gates and under the battering ram to reach InvadR. Cheely pointed out that a wood coaster fit perfectly in this area of the park, designed as a village of log buildings, set in the woods. The track twists and turns through the woods, with its lift hill passing over the lumbermill-themed Le Scoot flume ride, before crossing over the park’s railroad four times.

Matheny, who oversaw the art direction and signage, said, “The overarching storyline was inspired by the adjacent log flume. The creative narrative of InvadR indicates that the Villagers in New France are loggers and their town is created from the trees that lie on the edge of a river. In order to fight this Viking invasion, they did what they do best: created boats from local wood that resemble bears (the symbol of their people) to chase away the Viking vessels.”

Weber Group handled the fabrication of the signs and the entrance stockade, with its broken gates and battering ram, working from White and Matheny’s design concept. Shop drawing and fabrication drawings were produced, with the overall entrance structure being computer modeled in 3D. Doiron supervised a crew of 20 people to complete fabrication over a six-week period at Weber’s Indiana plant, followed by another two weeks for installation.

A lot of attention was given to evoking the feeling of authenticity. Regarding the signage, Matheny said, “Each sign’s ‘origin’ was analyzed against the Creative Narrative. First as: where is this sign located and which side (Viking or Villager) did it belong to? Once that is decided, the question was how would the Viking or Villager have fabricated a sign like this? Was it made hastily from boat parts or was it hand crafted by Villagers and subsequently damaged by invading Vikings? Each sign has its own story.” She noted that some of the signage uses a stretched-hide style that echoes a similar treatment at the nearby Smokehouse restaurant.

Creating custom, faux wood elements accompanied by unique signage is something Weber has done for numerous clients. “It’s very similar to work we’ve done on a number of waterpark resorts such as Kalahari, Camelback in the Poconos, and the Great Wolf Lodges,” said Doiron.

The existing wood elements in this area of the park were examined by Matheny along with Guernsey Tingle architect Rich Smith. It was important that the portion of the stockade comprising the entrance to InvadR blend in flawlessly with the existing stockade, comprised of 8-12” timbers. The initial concept was to use actual timbers, but the decision was made to construct them of fiberglass and epoxy instead. “Shattered timbers would take some doing, but we needed something secure and structurally sound,” said Doiron. “Safety was always a concern.”

The wood was made to look aged and as if the battering ram had actually forged its way through the gates – some parts of the wood have bark, others do not, and worm paths are visible, just as they would be in real wood. “It was amazing how close they came to the real logs – in texture, coloring, and everything else,” said Cheely.

The battering ram was constructed around a steel frame. White said, “As fun and theme-parky as the battering ram appears, most of it is fairly authentic except for the head. This project, like any theme park project, had to start with lots of historical, authentically sourced research. Even if the goal is to end up with something wholly and completely inauthentic to match a story or brand, it is the designer’s responsibility to start from real.”

While actual battering rams would have had heads made of bronze, the team considered the urgency with which the Vikings would have acted, impatient to make their move after seven centuries of dormancy. White said, “I doubt these guys would have bothered with any of the decor. ‘We have come to claim your fort!! We will take it in about one to two weeks when we finish our battering ram! AND another week for the cool dragon head!’” Instead, a wooden head was designed, with scroll work resembling Nordic patterns in the tongue.

Weber’s team lovingly fabricated the battering ram “to look like it went through war,” said Doiron. “We fully painted it as if it were just made, then we went back in and sculpted in charred parts of wood and sprayed on charring. There are elements in the piece where it looks like it was damaged by swords or other elements of battle.”

A big challenge for Weber Group was designing the battering ram so that it could be fabricated in segments in Indiana, shipped to the park in Virginia, and then reassembled on site. Through the use of 3D modeling, they were able to determine where to break apart the 20foot high frame so that it would fit in trucks for shipping. Meanwhile, Weber kept their client updated on progress. “During the fabrication process, we had calls weekly and they sent pictures,” said Cheely. “They would go around with an iPad, showing how things were in the shop.”

“We were able to match Cindy White’s designs with 90% accuracy,” said Matheny. “Every part of it was analyzed to attempt to recreate the appearance of a functioning ram while satisfying safety issues and an impressive entrance and exit sightline. Cindy is a consummate pro in visual communication. And ultimately, great designs cannot reach their potential without the expertise of a great fabricator. Weber Group’s people were wonderful to work with. They are true artists, and are detailed and story-driven down to every last nut and bolt.” •

Joe Kleimanhttp://wwww.themedreality.com
Raised in San Diego on theme parks, zoos, and IMAX films, InPark's Senior Correspondent Joe Kleiman would expand his childhood loves into two decades as a projectionist and theater director within the giant screen industry. In addition to his work in commercial and museum operations, Joe has volunteered his time to animal husbandry at leading facilities in California and Texas and has played a leading management role for a number of performing arts companies. Joe previously served as News Editor and has remained a contributing author to InPark Magazine since 2011. HIs writing has also appeared in Sound & Communications, LF Examiner, Jim Hill Media, The Planetarian, Behind the Thrills, and MiceChat His blog, ThemedReality.com takes an unconventional look at the attractions industry. Follow on twitter @ThemesRenewed Joe lives in Sacramento, California with his wife, dog, and a ghost.
Share
Facebook
Twitter
Linkedin
Email
Print
WhatsApp
Pinterest
ReddIt
Tumblr
Previous articleBespoke inflatable toys: better by design
Next articleUniversal’s Volcano Bay: Eruptions scheduled daily