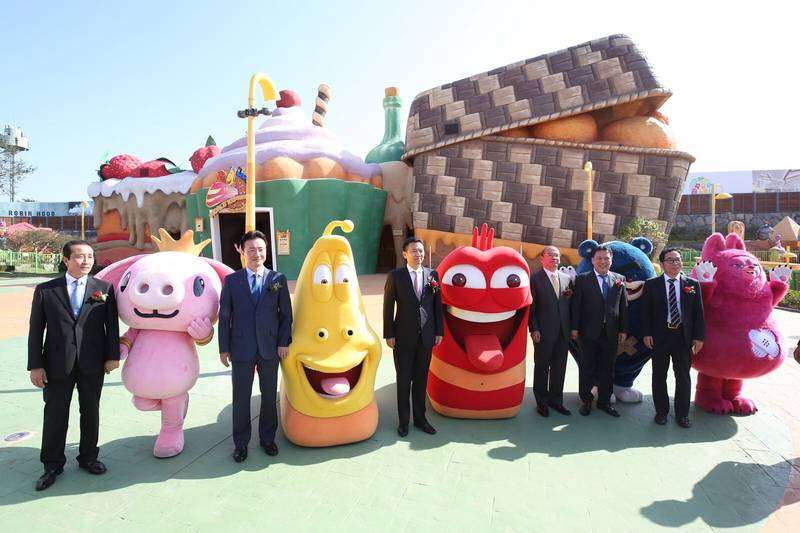 Shinhwa Theme Park is developed in collaboration with TUBAn, one of Korea’s premier animation companies, based on its popular 3D animated characters such as Larva, Wingcle Bear, Buck, and Oscar. The park offers three distinctly themed zones, aptly named “Larva’s Adventure Village”, “Oscar’s New World” and “Rotary Park”, which immerse visitors in some of the world’s greatest myths and histories brought to life through 15 exhilarating rides and attractions, themed exhibits and spectacular live performances.

Dr. Yang Zhihui, Chairman and Executive Director of Landing International said, “The opening of Shinhwa Theme Park signifies another key milestone for Jeju Shinhwa World which sets to offer the first world-class leisure and entertainment facilities in Jeju. It is our honor to partner with TUBAn and we are confident that our collaboration will bring high quality products and services to Shinhwa Theme Park and fulfill its mission of “delivering overwhelming joy and happiness” to every guest. With the opening of more facilities in Jeju Shinhwa World in the coming months, Jeju Shinhwa World is on track to become a world-class integrated destination resort that Jeju residents will be proud of.”

The Official Opening has been set in December 2017, when the remaining facilities in Jeju Shinhwa World including Marriott Resort, restaurants and food streets, retail mall and a foreigners-only casino will be open to the public.  Lionsgate Movie World at Jeju Shinhwa World is expected to commence construction in 2018 and is scheduled to open in 2019.

Joe Kleimanhttp://wwww.themedreality.com
Raised in San Diego on theme parks, zoos, and IMAX films, InPark's Senior Correspondent Joe Kleiman would expand his childhood loves into two decades as a projectionist and theater director within the giant screen industry. In addition to his work in commercial and museum operations, Joe has volunteered his time to animal husbandry at leading facilities in California and Texas and has played a leading management role for a number of performing arts companies. Joe previously served as News Editor and has remained a contributing author to InPark Magazine since 2011. HIs writing has also appeared in Sound & Communications, LF Examiner, Jim Hill Media, The Planetarian, Behind the Thrills, and MiceChat His blog, ThemedReality.com takes an unconventional look at the attractions industry. Follow on twitter @ThemesRenewed Joe lives in Sacramento, California with his wife, dog, and a ghost.
Share
Facebook
Twitter
Linkedin
Email
Print
WhatsApp
Pinterest
ReddIt
Tumblr
Previous articleSplash Pad and Pool House bids sought in Milwaukee
Next articleDynamic Attractions Launches Creative Studio and New Flying Theaters