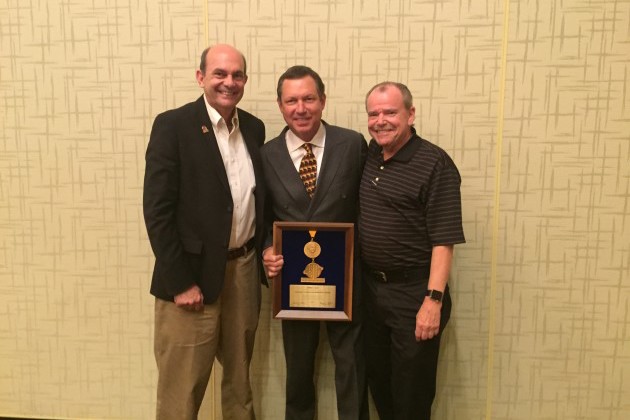 West Conshohocken, PA, USA — Jim Seay, president of Premier Rides, is a recipient of the prestigious ASTM International 2015 William T. Cavanaugh Memorial Award. Seay was honored for his extraordinary contributions to the field of international voluntary standards for the amusement industry.

The Cavanaugh Memorial Award commemorates W. T. Cavanaugh, chief executive officer of ASTM from 1970 to 1985, who firmly established ASTM International as the world leader in the development and dissemination of voluntary consensus standards.

A member and past chairman of ASTM Committee F24 on Amusement Rides and Devices, Seay has promoted the use, application, harmonization and adoption of ASTM amusement standards around the world. The committee maintains a strong international membership because of his efforts, which have contributed to the voluntary global use of ASTM standards for safer amusement attractions in countries all over the world. His contributions have also helped promote F24’s responsive development of standards for newer attractions such as ziplines and trampoline parks in recent years. Seay has been an ASTM member since 1989.

A graduate of Cornell University, where he received a bachelor’s degree in mechanical engineering, Seay did graduate studies at California State University Long Beach. He was an aerospace engineer at Hughes Aircraft and then an engineering and maintenance executive at Six Flags Theme Parks Inc., before joining Premier Rides Inc. in 1995 as executive vice president of engineering. He was named president the following year. A designer and manufacturer of roller coasters and other amusement rides and attractions, Premier Rides has worked with some of the largest theme park companies, including Six Flags, Universal Studios and Disney. Seay leads a global team of ride design, operation and maintenance professionals who have helped create and introduce magnetically launched roller coasters and the world’s tallest looping coaster, among many other accomplishments.

Seay has testified before the U.S. Congress during a review of the effectiveness of the U.S. standards system, and is a frequent speaker at amusement industry events all over the world. A member of the International Association of Amusement Parks and Attractions (IAAPA), he serves on the IAAPA Foundation Board of Directors and as well as its Government Relations and Safety Committees. He received the prestigious IAAPA Lifetime Service Award in 2013 for his long-term industry achievements and dedication.

Outside ASTM, Seay is a member of the AIMS International Board which provides the largest industry safety seminar in the world, the Themed Entertainment Association, the National Safety Council, the New England Association of Amusement Parks and Attractions and the New Jersey Amusement Association.  He also serves on a number of philanthropic Boards such as the Living Classrooms Foundation in Baltimore, Maryland.

Joe Kleimanhttp://wwww.themedreality.com
Raised in San Diego on theme parks, zoos, and IMAX films, Joe Kleiman would expand his childhood loves into two decades as a projectionist and theater director within the giant screen industry. In addition to his work in commercial and museum operations, Joe has volunteered his time to animal husbandry at leading facilities in California and Texas and has played a leading management role for a number of performing arts companies. Joe has been News Editor and contributing author to InPark Magazine since 2011. HIs writing has also appeared in Sound & Communications, LF Examiner, Jim Hill Media, and MiceChat. His blog, ThemedReality.com takes an unconventional look at the attractions industry. Follow on twitter @ThemesRenewed Joe lives in Sacramento, California with his fiancé, two dogs, and a ghost.
Share
Facebook
Twitter
Linkedin
Email
Print
WhatsApp
Pinterest
ReddIt
Tumblr
Previous articleNinjas Arriving at LEGOLAND California in 2016 with Unique Triotech Ride Experience
Next articleFright Fest Returns to Six Flags Great America in Biggest and Most Horrific Event Yet