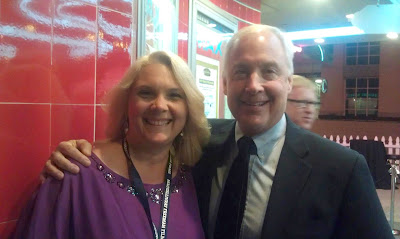 (September 19, 2012) — The above photo pretty much sums up the level of excitement as the first day of the 2012 Giant Screen Cinema Association International Conference came to a close at the Esquire IMAX Theatre in Sacramento, CA, USA.  Michelle Thompson-Duncan, the IMAX Theater Director at the Tech Museum in San Jose had a very big night.  Not only did her theater win the Best Booth award from IMAX, but as an avid Star Wars fan, she had the opportunity to meet Ben Burtt, the legendary Oscar-winning sound designer of the Star Wars films. 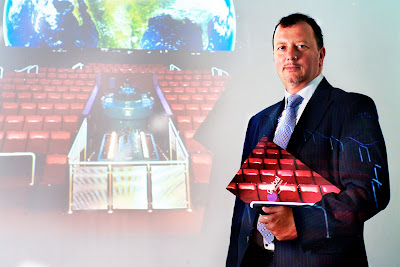 My day began by meeting Martin Howe of Global Immersion, who looks exactly like this stock photo from last year.  He discussed his company’s approach to giant screen digital conversion and the problems inherent in converting giant screen domes.  We also talked extensively about DIGSS, the Digital Immersive Giant Screen Specifications, now maintained by the GSCA, which aims to establish standards for museum-based giant screen theaters.  Later in the morning, I had some discussions on digital with Ammiel Najar of Graphic Films and Walt Ordway, the former CTO of DCI, which established standards for the digital cinema industry.
Also in the morning, there was a screening of Stephen Low’s fantastic Rocky Mountain Express, about the creation of Canada’s transcontinental railroad.  Low, one of the pivotal filmmakers in the giant screen lexicon, is an avid believer in the superiority of 70mm film over both digital capture and presentation.  Afterwards, he and I spent a few minutes discussing our mutual love of trains. I’ll be seeing the film again this Friday, but on a dome. 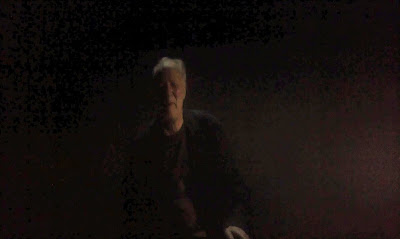 During the Projects in Development session, the German film director Werner Herzog appeared on screen to personally greet the delegates.  Never in my life had I expected to hear the director of my favorite film, Fitzcarraldo, utter “GSCA” and “Sacramento” in an IMAX theater.  It was quite the treat.  Herzog is planning to follow his 3D film about cave art in France, Cave of Forgotten Dreams, with an IMAX documentary on volcanoes.

Next, I talked with Tornado Alley director Sean Casey about a documentary on the Army Rangers he had directed and that I had caught the night before and Joe DeAmicis of the California Science Center about the space shuttle Endeavor’s trip from Florida.  Then it was time for a couple of sessions.  The first brought to the stage four theater operators, each of which had made the switch to digital, but each in a different manner.  The second brought together some leading filmmakers, including Low, Greg MacGillivray, Phil Streather, Melissa Butts, and Reed Smoot, to discuss whether or not it’s possible to produce a film that meets the needs of both dome and 3D.

The evening began with awards.  Between all the marketing awards, Dick Vaughan of the National Media Museum in Bradford, UK won the Big Shoe Award, given for outstanding volunteer contributions, and Diane Carlson of the Pacific Science Center in Seattle, WA received the Foudners Award from IMAX Corporation for her over 30 years of successfully running and promoting the brand and format.  Greg Foster, Chairman and President of Filmed Entertainment for IMAX appeared on screen to personally thank Diane for her contributions.  Science Centre Singapore and the Tech Museum shared the award for Best Booth.  The Digicel IMAX Theater in Trinidad won for Best Theater Marketing Campaign.  Flying Monsters won for Film Marketing.  Mission Impossible: Ghost Protocol and Rocky Mountain Express won for Best Feature and Best Short. Shackleton’s Antarctic Adventure was the 2012 inductee into the IMAX Hall of Fame. 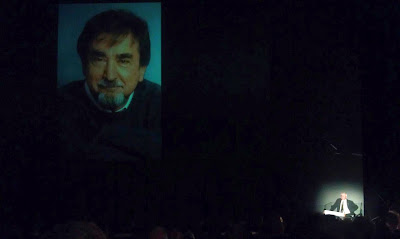 After the awards ceremony concluded, Graeme Ferguson, the surviving co-founder of IMAX, paid tribute to his friend and colleague, Roman Kroitor, who passed away on Sunday.  Ferguson talked about Kroitor’s career and his influence on both the film industry and on giant screen.  I spoke with Graeme afterwards, who told me he hadn’t prepared anything and was speaking off the top of his head and from his heart. 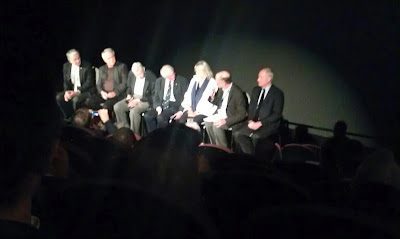 Graeme then joined the rest of the group responsible for the 1985 IMAX classic The Dream is Alive for a panel discussion.  In the photo above, they are (L to R and apologies on the poor image quality): David Keighley (post production), James Neihouse (one of the cinematographers), George Mulhern (from film sponsor Lockheed), Graeme Ferguson (producer/director), Toni Myers (editor), Jeff Kirsch (GSCA Chair, moderating this panel), and Ben Burtt (sound designer).
Following a screening of The Dream is Alive, we were given a special treat in honor of Roman. Just before it’s screening, I spoke to IMAX’s David Keighley about the special showing.  According to Keighley, in 2002, he struck a print off the dupe negative of the film we were about to see.  This print is the only one in circulation and was flown to the theater earlier in the day.
The film was Tiger Child, the very first IMAX film.  It played at the 1970 world’s fair in Osaka, Japan and is not an IMAX movie in the conventional sense.  Visitors to the Fuji Group pavilion entered an inflatable membrane structure where they watched a presentation called Mandala.  This involved visitors moving on a rotating circular platform while the Tiger Child IMAX film played on a screen at one side of the space and slides were projected on the structure’s interior surface.

This is a shot of the exterior of the building.  This and the following two photos are courtesy of Tensinet. 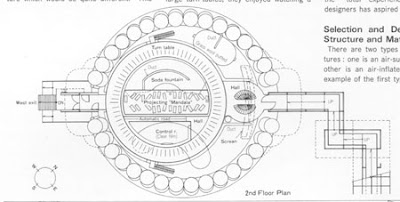 A schematic of the interior.  Note the rotating platform in the center and the IMAX screen on the right side. 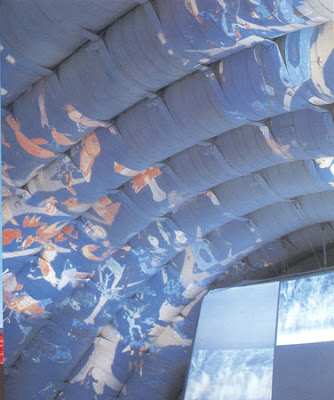 Slides projected onto the surface of the pavilion.  The top left corner of the IMAX screen is visible in this shot. 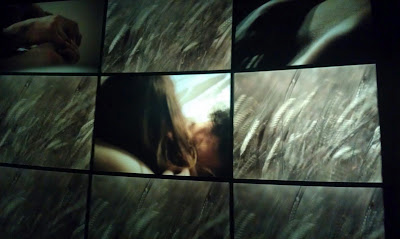 And here is a shot I took of Tiger Child, playing for the first time in Sacramento. Special thanks to Tammy Thurmon, Kelly Germain, Eileen Pheiffer, and Dyonous Thurmon of the GSCA and Doug Link, Wendy Russell, Jason Paride, and Gilbert Gonzalez for their incredible hospitality at one of the best giant screen conferences I’ve ever attended.  The GSCA International Conference and Trade Show continues through Thursday, with Dome Day taking place at the Tech Museum in San Jose on Friday.
Subscribe to InPark for FREE!
Submit your news

Joe Kleimanhttp://www.themedreality.com
Raised in San Diego on theme parks, zoos, and IMAX films, Joe Kleiman would expand his childhood loves into two decades as a projectionist and theater director within the giant screen industry. In addition to his work in commercial and museum operations, Joe has volunteered his time to animal husbandry at leading facilities in California and Texas and has played a leading management role for a number of performing arts companies. Joe has been News Editor and contributing author to InPark Magazine since 2011. HIs writing has also appeared in Sound & Communications, LF Examiner, Jim Hill Media, and MiceChat. His blog, ThemedReality.com takes an unconventional look at the attractions industry. Follow on twitter @themedreality Joe lives in Sacramento, California with his fiancé, two dogs, and a ghost.
Share
Facebook
Twitter
Linkedin
Email
Print
WhatsApp
Pinterest
ReddIt
Tumblr
Previous articleThe Big Question in Sacramento
Next articlePGAV Destinations Wins Award For Exhibit Design from AZA