The Big Question in Sacramento

(September 17, 2012) — The giant screen cinema industry delegates have been arriving from around the world here in Sacramento and the big questions on everyone’s mind, as one theater operator explained to me yesterday, are “What are the advantages of going digital?” and “How do I do it?”

That’s what I’m here to find out.  Yesterday, my investigation got off to a great start when I interviewed Mark Katz, President of Distribution for National Geographic Cinema Ventures, about his organization’s expanding content and branding program for digital museum theaters.  Later in the day I sat down with Tim Hazelhurst of the Marbles Kids Museum in Raleigh, NC.  Their Wells Fargo IMAX Theater became one of the first museum theaters to switch over to IMAX’s digital projection system.  Tim shared with me the process Marbles used in making their decision to go digital and what changes were made in the theater’s operation, along with what challenges have started to appear.

In the coming week, I’ll be meeting with executives from a number of companies involved in digital giant screen, including IMAX, D3D, Global Immersion, and Sky-Skan.  There are also presentations at the conference about the switch to digital, including one at the Hackworth IMAX Dome Theater in San Jose.  But most important, I’ll be speaking with the delegates on both sides of the issue, from integrators to operators.  This includes theaters that switched using conventional digital cinema equipment and a local integrator, others that went for a giant cinema-specific package, domes that are turning into digital planetariums, and theaters who have decided to hold out switching from film until the very last minute.

Look for more updates from the Giant Screen Cinema Association 2012 International Conference and Trade Show throughout the week. 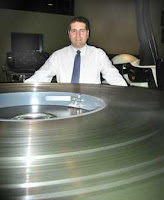 Joe Kleiman is InPark Magazine’s online news editor.  He has over 25 years experience working in the giant screen cinema industry.  In 1999, he was part of the team that opened the Esquire IMAX Theatre, host to this year’s GSCA International Conference and Trade Show in Sacramento, CA, USA.

Joe Kleimanhttp://wwww.themedreality.com
Raised in San Diego on theme parks, zoos, and IMAX films, InPark's Senior Correspondent Joe Kleiman would expand his childhood loves into two decades as a projectionist and theater director within the giant screen industry. In addition to his work in commercial and museum operations, Joe has volunteered his time to animal husbandry at leading facilities in California and Texas and has played a leading management role for a number of performing arts companies. Joe previously served as News Editor and has remained a contributing author to InPark Magazine since 2011. HIs writing has also appeared in Sound & Communications, LF Examiner, Jim Hill Media, The Planetarian, Behind the Thrills, and MiceChat His blog, ThemedReality.com takes an unconventional look at the attractions industry. Follow on twitter @ThemesRenewed Joe lives in Sacramento, California with his wife, dog, and a ghost.
Share
Facebook
Twitter
Linkedin
Email
Print
WhatsApp
Pinterest
ReddIt
Tumblr
Previous article
Creative Optimist: Producer George Wiktor of the GW Group (and SATE 2012 speaker) is interviewed by InPark Magazine
Next article
Joe Kleiman reports from the Giant Screen Cinema Association conference in Sacramento