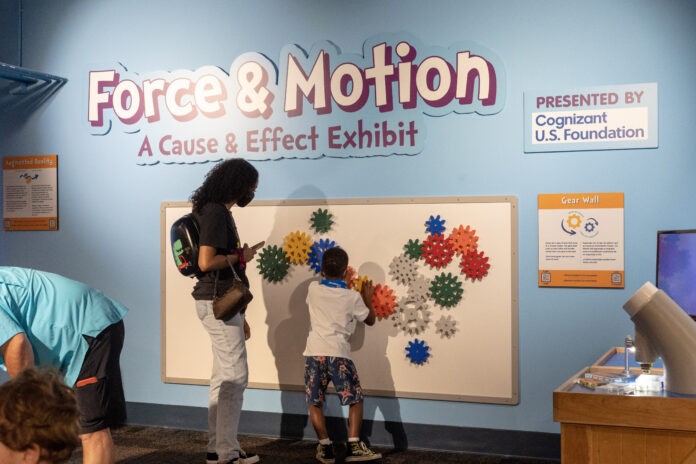 “The first phase of the new Step Up to Science exhibit enhances children’s STEM knowledge, offering various interactive opportunities for kids to discover the impacts of force and motion,” said Director of Exhibits and Education, Karen Kelly. “The play-centric environment sparks interest in concepts such as aerodynamics, static electricity, mass and velocity.”

Cincinnati-based design firm JRA served as consultant and advisor to the Children’s Museum of Atlanta’s internal design team. “When the Children’s Museum of Atlanta reached out to us to assist them on a refresh of the Step Up to Science Gallery, we were honored to help,” said Mike Meyer, JRA Senior Project Director. “The museum’s exhibit staff had already completed a significant amount of the research on the project’s content and design. We were there to aid in planning, project management and advise on any of the design efforts the museum needed. The result was really a partnership in design. We were thrilled to work with the museum staff again and further the original intent of the gallery. The outcome is a hands-on interactive gallery that will change in content well into the future, allowing children to experience changing topics in science.” JRA provided complete planning, design, and project management for the Children’s Museum of Atlanta’s comprehensive $8.9 million transformation in 2015.

Children dive into the concepts of mass, matter and velocity at the Magnetic Race Track by designing race tracks to compare speed and updating the design of their cars to alter the weight. At the Wind Tube, little ones create a flight experiment, exploring the principles of lift and wind resistance.

Kids of all ages enjoy the Giant Gear Wall, discovering a “Cause and Effect” lesson about the six simple machines through hands-on play. The captivating and high-tech Augmented Reality Wall allows junior scientists to learn about force, motion, fluid dynamics and flow by interacting with the virtual fluids and manipulating various shapes while observing the effect on flow patterns.

Focusing on static electricity and friction, the Static Dome consists of a transparent hemisphere with small foam beads mounted on a platform featuring a pair of tethered charging fabric pieces, while the Static Meter measures the static electricity guests hold in their own bodies. At the augmented reality system, Norilla, children will design structures to withstand earthquakes and learn how they can be improved. In addition to STEM concepts, the system explores persistence and how to enhance designs.

Teaching little ones about momentum, transfer of force and conversation of energy, the Air Cannon propels air from the end of the cannon and moves the summer curtain hanging from the Museum’s ceiling. Once installed near the Science Bar, the amazingly sturdy Wentzscope will not only teach kids about light and magnification but also about various science concepts — from seeing the structure of a child’s hair to more advanced botanical or medical slides.