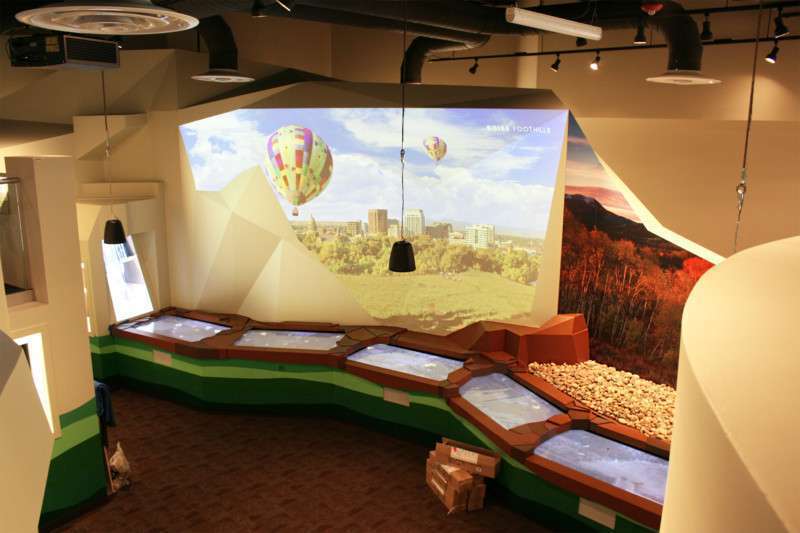 Lexington, a Nassal company, employs its design-build process to bring Idaho’s past into the future

Janet Gallimore, Executive Director of the Idaho State Historical Society, is very quick to point out, “The people of Idaho cherish our history. We became a territory in 1863. In 1881, nine years before we became a state, the people of Idaho founded a historical society. That’s pretty forward thinking when you consider that Idaho would have been a lot of desert and not a lot of people back then.”

In 1907, the historical society became a state agency, what Gallimore calls “the steward of state history.” The Idaho State Museum, operated by the Idaho State Historical Society, was designed in the style of the Civilian Conservation Corps of the 1930s and opened in the 1950s, with a small expansion in the 1980s. The museum featured traditional exhibits, which worked well for decades past, but with today’s visitors being more media- and interactive-savvy, museum management realized it was time for a change.

Gallimore and her team explored history museums of the Northwest, primarily the Museum of History and Industry in Seattle and History Colorado in Denver. They examined experience design, visitor services, rentals, and educational content and components, and what worked well in those particular markets. Additionally, they commissioned Lord Cultural Services to conduct an evaluation for redoing the Idaho State Museum.

Lexington, a Nassal Company, oversaw the design and construction of the new exhibits that would bring the Idaho State Museum into the 21st century. Fabrication was done in Lexington’s 52,000-square-foot shop in Los Angeles. Some of Lexington’s more recent museum credits are “Science Storms” at MSI Chicago, and “Dinosaur Hall” and “Nature Lab,” both at the Los Angeles County Museum of Natural History. These projects have been recognized with awards from SEGD, ASTC, and the TEA.

Up, down, North, South

With an official public opening date of October 12, 2018, the refresh of the Idaho State Museum includes a redesigned entrance experience. Its exhibition space has expanded from 10,000 to 15,000 square feet, and its new exhibits are media-rich, with 46 media-based experiences throughout the museum.

Upon entering, visitors will find a large, interactive touchtable in the lobby, in the shape of the state. Visitors proceed through the museum’s original 1950s Art Deco facade and head to either the upper or lower galleries. From the Origins gallery, which showcases tales of Idaho’s Native Americans and indigenous wildlife and geology, they can journey with Lewis & Clark to the upper galleries, which showcase the three distinct regions of Idaho – the North, with its forests and lakes; Central Idaho, with its mountains and rivers; and the South, with its deserts and canyons. Each of these zones features multiple interactive media stations and scenery comprised of stylized geometric representations of natural elements, such as rocks and trees.

One of the highlights of this area is a media presentation on the 1910 Big Burn, one of the biggest wildfires in US history, destroying more than three million acres. This area also houses several media-based attractions that the museum calls “virtual adventures.” In one, visitors sit in a chairlift, and on a multimedia screen unfolds the story of how Sun Valley became a hub for women’s competitive skiers and Olympic champions. A mural of Mt. Baldy behind the lift adds to the ambiance. In another experience, visitors pedal a bicycle as a screen in front of them matches their speed for a ride through downtown Boise or historic Pocatello.

On the bottom floor is Boomtown, a children’s museum within the history museum. Boomtown caters to the age seven-and-younger crowd and features colors and shapes appealing to children. It is a play-oriented area designed to enhance tactile development, where children take on professions and trades found in the early days of the state. Also on the first floor is History Lab, where guests can participate in guided activities, such as designing a house or charting Lewis and Clark’s journey on a map. Michael Shearin, Lexington’s Design Director, describes History Lab as being very much a uniform style evocative of a lab or classroom, while other exhibits are much more stylized. The freedom to move about between galleries allows visitors to choose their own paths. Michael Shearin points out, “In terms of creating a nonlinear pathway, it’s the way museums have been doing it for the past decade: giving visitors choices rather than the old museum ‘death march.’ It’s very appropriate – because history is not linear, and by doing this we can tell one of the museum’s big stories – interconnectedness.”

Design-build is not the typical approach taken by state-run organizations. The traditional build-construct method is more likely to be adopted by museums and government institutions. But throughout this process, Lexington’s collaborative role with the Historical Society was that of collaborative partner, rather than vendor.

Gallimore spoke of the benefits of taking this approach. “The design-build process allowed the team to successfully integrate multiple disciplines on the front end,” she says. “It was very effective from a cost control standpoint and added a richness to the project.”

“The key to this project is that Lexington was the client’s contractor on this, working closely with the client,” says Shearin. “We built the team and were able to keep cost drivers open to the client. We’re proud that we delivered on our promise made to the client early in the design phases, meeting and exceeding expectations.”

As the project lead, Lexington brought together a number of leading design firms and subcontractors to work on exhibit design, installation, and media integration. Exhibit design was provided by Santa Fe-based Andy Merriell & Associates, whose innovative work includes “The Daily Planet” at the North Carolina Museum of Natural Sciences and History Colorado’s “Time Machines,” both media-intensive exhibitions.

Merriell created a series of digital fly-throughs of the museum to pre-visualize what exhibits would look like at different price points. It was part of the cost control practices inherent in the design-build methodology.

The new exhibits underwent a 2-½ year design period, during which master planning, conceptual design, and the creation of schematics were undertaken. Once they had concluded the design phase, Lexington entered the next phase – construction.

In January 2017, about 70% of the way through the process, during design development, came a new challenge. Lexington was acquired by The Nassal Company, a leading fabrication and production company for the attractions industry, headquartered in Orlando. This naturally raised some concerns at the Historical Society, as to how a new owner of its project lead might affect the project itself. Nassal management took steps to assuage those concerns and maintain the project and the relationship. They assured the museum Board that they had every intention to see the project through to completion with the same high level of quality and service. Gallimore says of the new partnership, “From the start, they have been transparent, fast, and extremely responsive.”

Throughout the process, Shearin and his team worked closely with Merriell, providing technical expertise about fabrication methodology and material selections so the designer could concentrate on overall look and form, how visitors would interact with a display, and the content delivery system. This kind of close collaboration, with some decisions being made in the field during production, is characteristic of the design-build process.

When the project switched from the design phase to construction, Lexington created material samples to show the client and Merriell. According to Shearin, “The budget influenced our methodology. First, we had to have a sense of how things work, aligning the design with the budget, which created the overall look for the final product. We built mockups of the exhibit cases so the client could see how it would look, what the access was for curators, what tools were required to enter the case.”

The exhibits were given a unique look – geometric faceted rock formations that were all constructed out of fire-rated MDF and plywood with a scenic paint finish – what Shearin calls “highly stylized, contemporary work.” A mockup was created of a stylized, geometric wall upon which images are displayed, so that media producer Richard Lewis Media Group and AV integrator Electrosonic could test the video projection.

Knowing that guests would touch the exhibits, materials were chosen that would reduce wear and tear over time. For long-term maintenance, many of the finishes are single color, allowing the museum’s maintenance team to easily maintain the look of the exhibits.

When Lexington became part of the Nassal family, so did its facilities, skilled artisans, and reputation for quality. With the backing of Nassal, Lexington was able to successfully complete its extensive update of the Idaho State Museum within budget and on time.

Among those excited by the new design of the museum is Idaho Governor Butch Otter. “I am big believer in the expression: ‘you can’t know where you are going, until you take a good look back at where you have been.’ Our newly renovated and expanded historical museum will help give visitors that vital context in a bold new way. It will provide a dynamic link from the past to the exciting promise that is Idaho’s future. As the fastest growing state in the nation, it will help us tell the story of Idaho to a brand-new generation of citizens and tourists alike. The interactive displays will enhance the visitor experience, provide teachers and students with a vibrant new educational resource, and help our state expand tourism. The First Lady and I can’t wait to cut the ribbon!” • • •

Joe Kleimanhttp://wwww.themedreality.com
Raised in San Diego on theme parks, zoos, and IMAX films, Joe Kleiman would expand his childhood loves into two decades as a projectionist and theater director within the giant screen industry. In addition to his work in commercial and museum operations, Joe has volunteered his time to animal husbandry at leading facilities in California and Texas and has played a leading management role for a number of performing arts companies. Joe has been News Editor and contributing author to InPark Magazine since 2011. HIs writing has also appeared in Sound & Communications, LF Examiner, Jim Hill Media, and MiceChat. His blog, ThemedReality.com takes an unconventional look at the attractions industry. Follow on twitter @ThemesRenewed Joe lives in Sacramento, California with his fiancé, two dogs, and a ghost.
Share
Facebook
Twitter
Linkedin
Email
Print
WhatsApp
Pinterest
ReddIt
Tumblr
Previous articleADG: Breaking waves
Next articleAlterface: A Desperado, with pirates