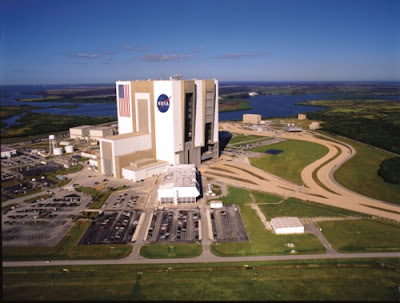 A special Kennedy Space Center Up-Close Tour has been extended through the end of 2012 to provide visitors a look inside the 525-foot-tall Vehicle Assembly Building (VAB), where the Apollo rockets and space shuttles were assembled. One of the largest buildings in the world, the VAB had been off limits to visitors for more than 30 years until the tour was added in November.

The space agency is also working with Delaware North Companies, which operates Kennedy Space Center Visitor Complex, on final details of new tours featuring operational areas that visitors have also rarely had the opportunity to see. Announcements regarding the new tours are expected in the coming weeks.

The visitor complex remains one of the best vantage points to see rocket launches taking place from Cape Canaveral Air Force Station. More than 10 launches have been scheduled for 2012 to carry NASA science missions and government satellites, as well as to test commercial space programs. An Atlas V rocket carrying a satellite was launched May 4, and next is a demonstration launch of a Falcon 9 rocket by SpaceX, the first mission by a commercial company to travel to and dock with the International Space Station.

“There’s an opportunity to see fascinating aspects of the space program that few people have seen, and a chance your visit can coincide with a rocket launch,” said Bill Moore, chief operating officer of Kennedy Space Center Visitor Complex.

“We want people to know that a visit to Kennedy Space Center remains a visit to an operating facility where a lot of exciting things are happening. It’s a world-class destination that offers a truly authentic and memorable visitor experience, and this year is an ideal time for Florida residents and vacationers to visit,” Moore said.

The 50th anniversary year features several events, including a celebration July 1 to mark the anniversary of the space center being officially acknowledged as an operating spaceflight center under the name Launch Operations Center. It was later changed to John F. Kennedy Space Center in honor of the president and his vision of Americans landing on the moon.

In celebration of the 50th anniversary, Kennedy Space Center Visitor Complex is offering guests two special offers that can save up to 30 percent on admission, food and merchandise, as well as secure access to view rocket launches. Details of Kennedy Space Center’s 50th Gold Admission Package and a $50 Annual Pass are available at http://kennedyspacecenter.com/annual-pass-offer.aspx.

Events are also planned to mark milestones in the creation of the future home of the space shuttleAtlantis, expected to open in July 2013. Ground was broken in January on the exhibit, and this fall Atlantiswill “roll over” from its processing facility inside the Kennedy Space Center to the visitor complex for permanent display. The 65,000-square-foot Atlantis exhibit will provide guests a unique vantage point to view Atlantis up close, while telling the story of the 30-year Space Shuttle Program through a number of hands-on, interactive and immersive mediums.

From the earliest days of America’s storied space program, Kennedy Space Center has captured the world’s attention and fed its imagination as the epicenter of mankind’s greatest adventure. Nestled on a placid barrier island on Florida’s “Space Coast,” the endlessly bustling Kennedy Space Center Visitor Complex features attractions and interactive programs unfolding year-round, making it a must-see for every Florida visitor.

Kennedy Space Center’s remarkable collection of rockets, launch pads, NASA aerospace technology components and launch viewing opportunities offer an authenticity and behind-the-scenes access unlike any other Central Florida destination. The visitor complex offers visitors numerous activities and interactive programs, including meeting real astronauts, that will leave them with a new-found understanding of the U.S. space program. Highlights are provided below:

KSC Tours
Short of becoming an astronaut, there’s no better way to get a behind-the-scenes glimpse ofKennedy Space Center than on a NASA Tour.

The Kennedy Space Center Up-Close Tour is led by a trained space expert, giving visitors an insider’s view of the space program from launch preparation to liftoff. The tour includes up-close views of rocket and space shuttle launch pads, the interior of the VAB, and the 6 million-pound crawler-transporters, which moved the space shuttle from the VAB to its launch pad. For the first time since 1978, guests have the chance to tour inside the VAB to see firsthand where monstrous vehicles were assembled for launch, from the very first Saturn V rocket in the late 1960s to the very last space shuttle, STS-135 Atlantis. The opportunity to visit the VAB is offered for a limited time, to a limited number of guests. The tour culminates at the Apollo/Saturn V Center. Price is $25 for adults and $19 for children ages 3-11 plus tax, in addition to admission.

Cape Canaveral: Then & Now Guided Tour is a narrated, in-depth journey guiding visitors through the Cape’s 50-year history of space exploration. Highlights include Launch Complex 5/6, site of the first two Mercury launches and the birthplace of NASA’s manned space program; the Air Force Space and Missile Museum; the Mercury Memorial; and Launch Complex 19, site of 10 manned missions in two years. The tour stops at Launch Complex 34, site of the 1967 Apollo 1 tragedy in which astronauts Gus Grissom, Edward White and Roger Chaffee perished in a fire during a launch test. The tour culminates at the Apollo/Saturn V Center. Photo ID is required for guests age 18 and older. International guests must present a valid passport to participate. Photography and video are limited to designated tour stops. Price is $25 for adults and $19 for children ages 3-11 plus tax, in addition to admission.

Included with admission is the regular bus tour, which explores the history of the Apollo moon and space shuttle programs. It includes panoramic views of launch pads and stops at the LC-39 Observation Gantry and the Apollo/Saturn V Center.


IMAX® Theaters
Kennedy Space Center Visitor Complex is home to not one, but two five-and-a-half-story-tall IMAX screens – the only back-to-back 3D IMAX theaters in the world. Now playing are two films featuring ongoing NASA missions: Space Station 3D and Hubble 3D. Space Station 3D, filmed by 25 astronauts and cosmonauts and narrated by Tom Cruise, takes audiences on an incredible cinematic journey of discovery from planet Earth to the newest star in the sky – the International Space Station. Hubble 3D, narrated by Leonardo DiCaprio, brings the furthest depths of the universe to life, transporting audiences to distant galaxies to explore the mysteries of deep space.Hubble 3D offers an inspiring and unique look into the Hubble Space Telescope’s legacy and its profound impact on the way we view the universe and ourselves.


Astronaut Training Experience (ATX)
Participants can take one giant leap toward the dream of being an astronaut or a crew member through an exciting program of training and preparation for the rigors of spaceflight. The hands-on program includes true-to-training simulator exercises and a space shuttle mission simulation aboard a full-scale orbiter mock-up. Reservations are required for the half-day adult ATX Core program or Family ATX program.


Live Space Launches
The noise, the vibrations – and the view! From countdown to blast off, there’s nothing quite like an authentic rocket launch into space. An on-going schedule of launches keeps eyes glued to the skies above Kennedy Space Center throughout the year.


Rocket Garden
Visitors can marvel at seven vintage rockets from the Mercury, Gemini and Apollo space programs at the Rocket Garden. The Apollo 11 gantry arm and Apollo capsule model allow visitors to reenact the heart-pumping moments of countdown and launch, while the Mercury and Gemini capsules let guests experience firsthand just how small early spacecraft were.


Astronaut Encounter
Visitors can come face-to-face with one of the distinct few who have experienced space travel and hear firsthand what it is like to live in space at Astronaut Encounter. Held daily at the Astronaut Encounter Theater, the half-hour interactive program features a question and answer session and an opportunity to take a picture with the astronaut.


U.S. Astronaut Hall of Fame®
Although much of the story at Kennedy Space Center is about state-of-the-future technology, the Astronaut Hall of Fame is about the brave men and women who have flown in space. The Hall of Fame features the world’s largest collection of astronaut memorabilia, plus stimulating displays, exhibits and tributes to the heroes of the Mercury, Gemini, Apollo and space shuttle programs. A historic collection of spacecrafts includes the Mercury Sigma 7 capsule and a Gemini training capsule. The newest addition is Science On a Sphere, a global display that takes visitors on a three-dimensional journey around the world and throughout the solar system via dynamic, animated images of the atmosphere, oceans and planets. The U.S. Astronaut Hall of Fame is open daily from 12 p.m. to 6 p.m. and is included with admission to Kennedy Space Center Visitor Complex.


Merritt Island National Wildlife Refuge
Kennedy Space Center is an ecological sanctuary encompassed by the Merritt Island National Wildlife Refuge, home to more state- and federally-protected wildlife than any other national refuge. Throughout 140,000 acres of estuaries, marshes and coastal dunes are seven distinct habitat types and more than 500 species, from manatees to alligators, bald eagles to ospreys, and butterflies to sea turtles. Look for five hiking trails from 1/4 mile to five miles long, a seven-mile driving tour and countless photo opportunities.


Exploration Space: Explorers Wanted
Step into the center of space travel and become part of the future of exciting possibilities at Exploration Space: Explorers Wanted. The 10,000-foot exhibit immerses visitors into an environment of discovery and exploration beyond our home planet. Live theater, interactive experiences and large-scale multimedia presentations display what the future of space travel may look like, emphasizing that space exploration is not just about the hardware, but about the people behind the technology that make it all possible. The main show, Explorers Wanted, runs twice an hour. New destinations for space travel are introduced as space pioneers of tomorrow are invited to embark on new missions and embrace the challenges of future space exploration.

Joe Kleimanhttp://wwww.themedreality.com
Raised in San Diego on theme parks, zoos, and IMAX films, InPark's Senior Correspondent Joe Kleiman would expand his childhood loves into two decades as a projectionist and theater director within the giant screen industry. In addition to his work in commercial and museum operations, Joe has volunteered his time to animal husbandry at leading facilities in California and Texas and has played a leading management role for a number of performing arts companies. Joe previously served as News Editor and has remained a contributing author to InPark Magazine since 2011. HIs writing has also appeared in Sound & Communications, LF Examiner, Jim Hill Media, The Planetarian, Behind the Thrills, and MiceChat His blog, ThemedReality.com takes an unconventional look at the attractions industry. Follow on twitter @ThemesRenewed Joe lives in Sacramento, California with his wife, dog, and a ghost.
Share
Facebook
Twitter
Linkedin
Email
Print
WhatsApp
Pinterest
ReddIt
Tumblr
Previous articleDollywood’s Splash Country Opens for 12th Season
Next articleDiscovery Science Center Joins With Santa Ana and OC Zoos for Wild Summer