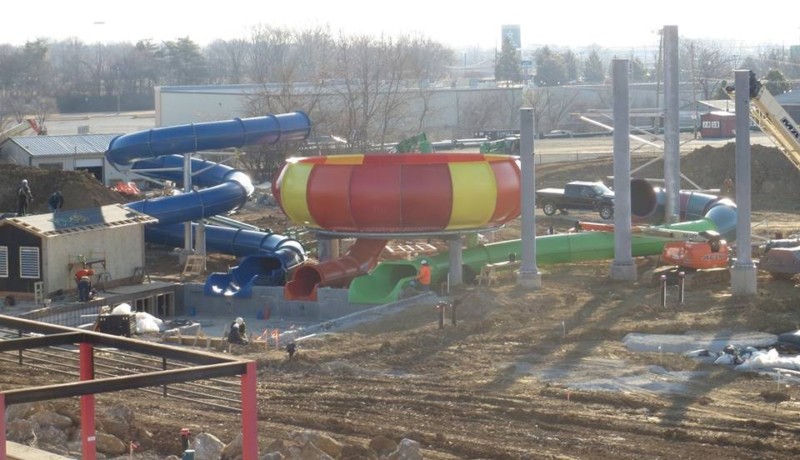 ‘Dozens of workers could be seen across the park during a visit Thursday.

“John Mulcahy, director of marketing and communication for Kentucky Kingdom, warned me not to be fooled by the fact that a new steel roller coaster — Lightening Run — is just now being assembled. Or that only one of the six new slides and rides planned for the expansive water park has been constructed, and very little concrete has been poured for the wave pool and adventure river planned in the Hurricane Bay Beach Club.

“He said all of the work, which is costing an estimated $44.5 million, will be done in time for a May 24 opening.

“Fall was very good to us,” he said, adding that mild temperatures in late fall and early winter allowed workers to complete much of the deferred maintenance of rides and painting and construction of buildings.

“Work was slowed a bit in late January and early February, “but you just plug along, you make it up on the weekends,” Mulcahy said.

“He noted that the investments so far also include about $1 million in a new point-of-sales system for the gates, restaurants and shops in the 63-acre theme park.”

Joe Kleimanhttp://wwww.themedreality.com
Raised in San Diego on theme parks, zoos, and IMAX films, InPark's Senior Correspondent Joe Kleiman would expand his childhood loves into two decades as a projectionist and theater director within the giant screen industry. In addition to his work in commercial and museum operations, Joe has volunteered his time to animal husbandry at leading facilities in California and Texas and has played a leading management role for a number of performing arts companies. Joe previously served as News Editor and has remained a contributing author to InPark Magazine since 2011. HIs writing has also appeared in Sound & Communications, LF Examiner, Jim Hill Media, The Planetarian, Behind the Thrills, and MiceChat His blog, ThemedReality.com takes an unconventional look at the attractions industry. Follow on twitter @ThemesRenewed Joe lives in Sacramento, California with his wife, dog, and a ghost.
Share
Facebook
Twitter
Linkedin
Email
Print
WhatsApp
Pinterest
ReddIt
Tumblr
Previous article
Alcorn McBride Names Electori 2013 Distributor of the Year
Next article
Kentucky’s Ark Encounter to Begin Construction

Qiddiya awards contract of US$1 billion evaluation to construct Six Flags location, the first outside of the North America