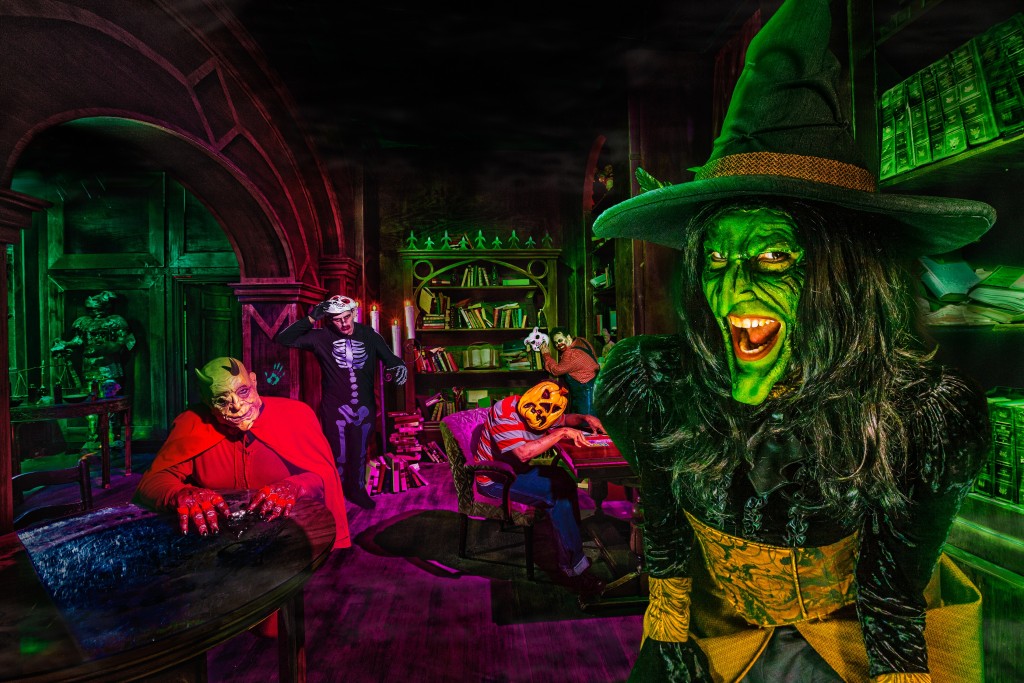 The veil between the living and the dead is severed when Houdini’s ghost materializes during a séance and ushers a host of demonic illusions to play tricks on anyone who intrudes on his theatre. From the prop room to the main stage this dilapidated theatre will make visitors skin crawl. Will you be part of the disappearing act?

In the deep recesses of the mind, on the clouded brink of insanity, lies the hellish wasteland of delirium; a place so gruesome that your imagination fails to comprehend the horrors. Illusion and paranoia are your only anchors to reality. Welcome to your worst nightmare!

Dominion of the Damned

The Blood Queen’s reign has ended as she goes to regenerate after her long reign. In the new cycle ancient vampire lore decrees there shall always be one to rule the damned… Long live the King!

The world as we know it has ended. The survivors in this barren desert have scavenged to rebuild society. The rich and the powerful have turned all others into slaves for sport. Enter the post apocalyptic arena where gladiators are forced to battle to their deaths for entertainment. Are you game?

The twisted mind of Edgar Allen Poe comes alive as the “Forevermore Killer” works his way through one haunting tale after another. All the victims, driven mad by a combination of drugs and torture, unwittingly find themselves a part of “The Raven,” “The Tell-Tale Heart,” “The Pit and the Pendulum,” The Masque of Red Death” among others. Guests will want to catch up on their reading to stay a chapter ahead of their demise.

Enter a world where madness is just a looking glass away. What is real and what is an illusion? A cursed mirror absorbs everyone into a mechanical wasteland of despair. Hideous creatures of beauty and horror stalk the mirror world, hoping to draw another victim into a nightmarish labyrinth.

Years have passed since the blue fairy denied him his final wish, but Pinocchio has returned with an army of murderous marionettes intent on killing his former masters. The purpose of his killing spree – human flesh to cover his twisted wooden body. Revenge comes with no strings attached.

Return to the Old West and walk in the bloody footsteps of a betrayed and left for dead gunslinger on his path to retribution against a corrupt township. This journey back in time takes guests on a trail of terror through abandoned gold mines, a treacherous corral, a seedy saloon and a final showdown at town hall.

Trick or treat, which will it be? Step forward and ring the witch’s doorbell. Oh, she is home, but where? You are not quite sure. Don’t be afraid, her minions will guide you. I am sure that the tales of the many Hallows Eve victims are just that. You can come away with a treat, but is it worth it?

Folks near and far come a-runnin’ for Farmer Willy’s world famous BBQ! Guests are welcome to venture through the Slaughterhouse where Uncle Willy will feed them full of BBQ, slather them with special sauce, tenderize them with his chainsaw and grind them into a tasty treat. Bone appetite!

This high energy drumming quartet is known for their unique blend of amazing percussion skills.

“Carny Trash” offers up Aye Jaye a comedy sideshow and magic act with impeccable comedic timing and a master of the unexpected.

The Gypsy Camp area will present “Cursed” featuring the magical and hypnotic powers of the beautiful Gypsy dancers.

A Knott’s Scary Farm legend returns to the Ghoultime Theatre – Elvira, Mistress of the Dark – stars in her all-new stage show:  ELVIRA’S SINEMA SEANCE!  Elvira is back in all her ghoulish glory bringing her own brand of sexy sass and comedy to a fast-paced, multi-media extravaganza featuring the unique hiphop/freestyle dance team The Academy of Villains direct from America’s Got Talent!

“Possessed” where guests experience a new kind of terror as ghosts of the past are released and possession is their goal. “Possessed” is filled with evil spirits and ghastly special effects that will bring a new dimension to your nightmares.

The Hanging: A Gothic Fairytale

The traditional “Hanging” goes Hollywood as Hollywood executives realizing that they have run out of super heroes to base new blockbusters upon turn to classic fairy tales.

Knott’s Boardwalk is taken over by “CarnEVIL,” where the freak show is the main event and clowns crave your undying attention.

Those brave enough to shake off the fear in “Fiesta De Los Muertos” will encounter the grim fusion of dance music, colorful morbid allusions to death, and larger than life stilt walkers. This scare zone is the ultimate late night celebration of Dia de los Muertos.

There is no place quite like “Ghost Town,” home to a whole cast of night stalkers including the notorious Sliders who lurk in every fog-filled corner. Guests attempt to navigate the winding streets that may just lead to the graveyard!

The backstreets of Ghost Town are shrouded in moonlight darkness and fearsome howls pierce the silence. In a blur of crimson teeth, werewolves stalk the “Gypsy Camp” seeking revenge for an ancient gypsy curse. Will you be the canine’s next meal?

A vampire world of flesh and machine, of gears and steam offers a journey through the streets of a steam punk influenced city of the dead where blood is power.

Many years ago, The Green Witch uncovered a wicked source of power in the depths of the Calico Mine, and now she’s hell-bent on using this mysterious energy to capture and corrupt all who dare enter. Could this be the origin of her wretched Tricksters? A foreboding warning hangs near the entrance of the mine, “Beware the witch’s keep!”

Making its debut in 2012, Trapped was Knott’s Scary Farm’s first reservation only, interactive maze – and was an immediate sell-out. Trapped returns bigger and more intense than its predecessor. For those lucky enough to secure a reservation, Trapped will offer a longer running time, more challenging puzzles, more mind-bending contraptions and more in-your-face scares. *Additional fee applies.

Joe Kleimanhttp://wwww.themedreality.com
Raised in San Diego on theme parks, zoos, and IMAX films, InPark's Senior Correspondent Joe Kleiman would expand his childhood loves into two decades as a projectionist and theater director within the giant screen industry. In addition to his work in commercial and museum operations, Joe has volunteered his time to animal husbandry at leading facilities in California and Texas and has played a leading management role for a number of performing arts companies. Joe previously served as News Editor and has remained a contributing author to InPark Magazine since 2011. HIs writing has also appeared in Sound & Communications, LF Examiner, Jim Hill Media, The Planetarian, Behind the Thrills, and MiceChat His blog, ThemedReality.com takes an unconventional look at the attractions industry. Follow on twitter @ThemesRenewed Joe lives in Sacramento, California with his wife, dog, and a ghost.
Share
Facebook
Twitter
Linkedin
Email
Print
WhatsApp
Pinterest
ReddIt
Tumblr
Previous article
Parque de Atracciones de Madrid – Halloween 2013
Next article
Six Flags Discovery Kingdom – Fright Fest