PHOTOS: Opening of Voyage to the Iron Reef from Knott’s Berry Farm and TRIOTECH 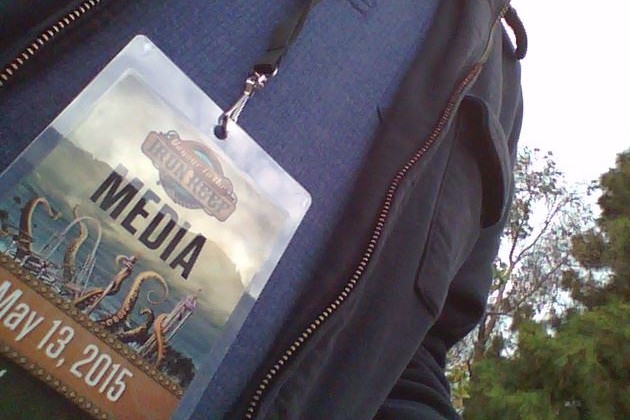 Buena Park, CA, USA (May 15, 2015) — On Wednesday, May 13, Knott’s Berry Farm held its opening ceremony for Voyage to the Iron Reef, the park’s new 4D dark ride shooter designed by Knott’s in conjunction with TRIOTECH. InPark News Editor Joe Kleiman was there and here are some of his photos of the event.  A behind the scenes look at the design of the new attraction will appear in an upcoming issue of InPark Magazine.

Knott’s General Manager Raffi Kaprelyan speaks with Disney Legend and former Imagineer Bob Gurr before the ceremony.  Gurr recounted to the crowd his experience working on Kingdom of the Dinosaurs in the 1980’s, a dark ride which occupied the same space as Voyage to the Iron Reef.  He also gave high accolades to the new attraction from Knott’s and TRIOTECH. 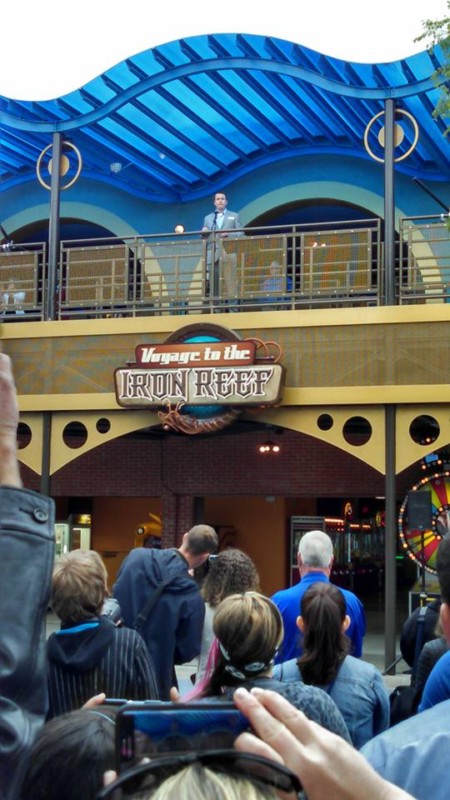 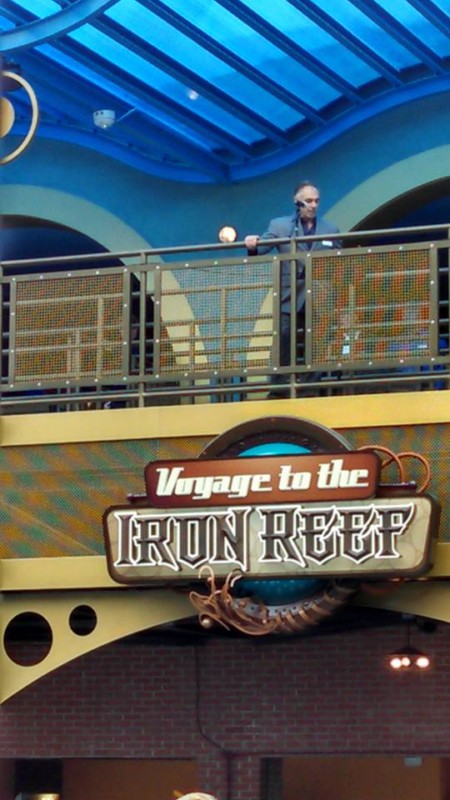 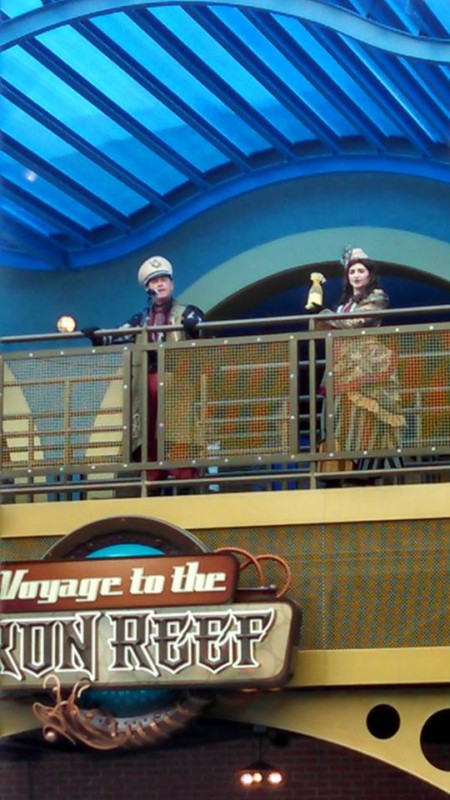 The captain and his friend prepare to christen the new ride. 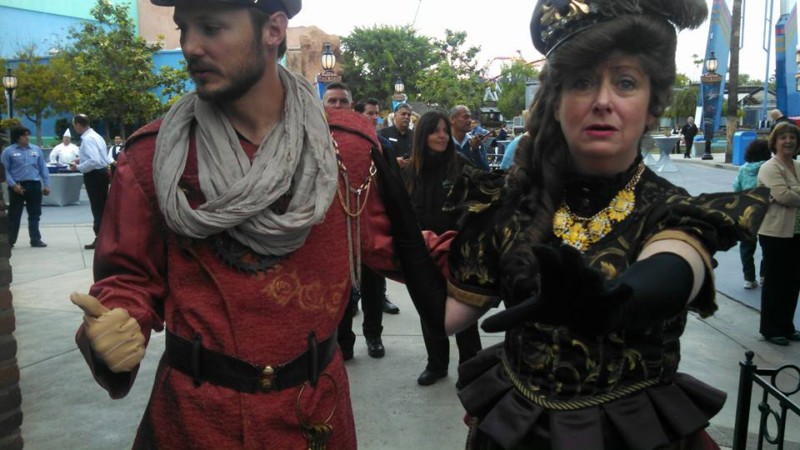 Costumed characters welcomed us onto the ride and encouraged us to destroy the Kraken Queen and her minions. 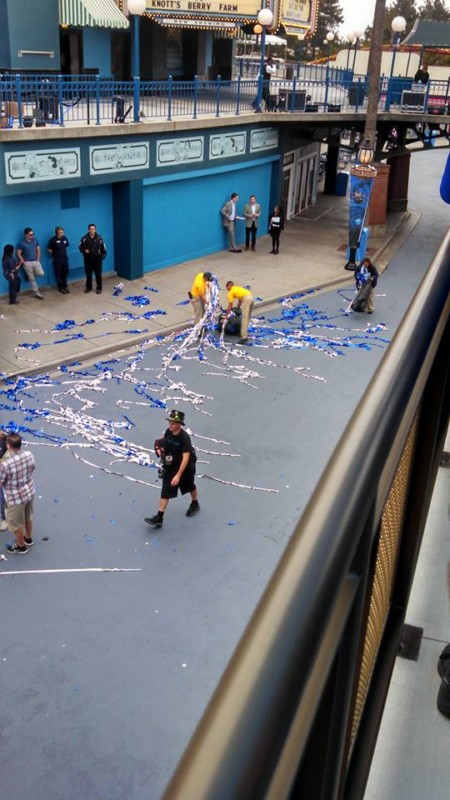 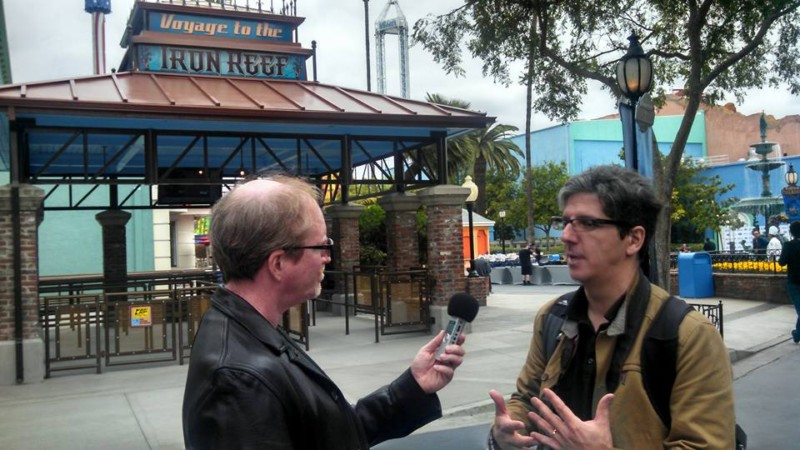 Christian Martin of TRIOTECH (Right) is interviewed for a podcast. 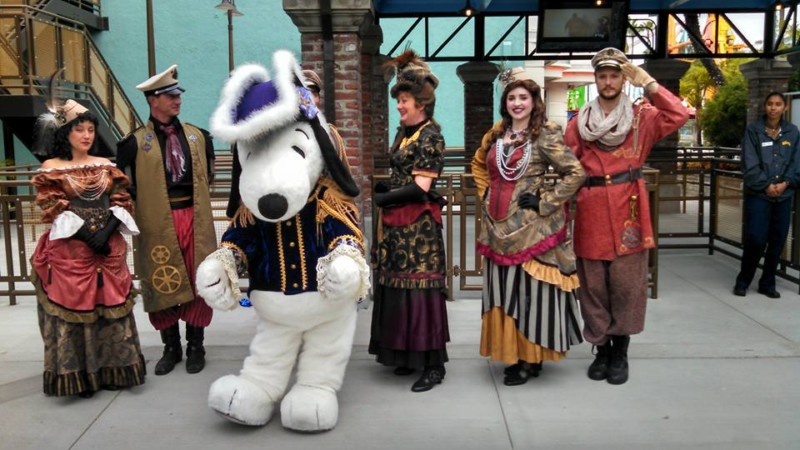 Steampunk inspired nautical costumes were created by Lara Hanneman, Knott’s Director of Entertainment Production, and her team, who also came up with the concept for Voyage to the Iron Reef.

Joe Kleimanhttp://wwww.themedreality.com
Raised in San Diego on theme parks, zoos, and IMAX films, Joe Kleiman would expand his childhood loves into two decades as a projectionist and theater director within the giant screen industry. In addition to his work in commercial and museum operations, Joe has volunteered his time to animal husbandry at leading facilities in California and Texas and has played a leading management role for a number of performing arts companies. Joe has been News Editor and contributing author to InPark Magazine since 2011. HIs writing has also appeared in Sound & Communications, LF Examiner, Jim Hill Media, and MiceChat. His blog, ThemedReality.com takes an unconventional look at the attractions industry. Follow on twitter @ThemesRenewed Joe lives in Sacramento, California with his fiancé, two dogs, and a ghost.
Share
Facebook
Twitter
Linkedin
Email
Print
WhatsApp
Pinterest
ReddIt
Tumblr
Previous articleConstruction Begins on PortAventura’s New Ferrari Theme Park
Next articleBusch Gardens and SeaWorld Celebrate Endangered Species Day