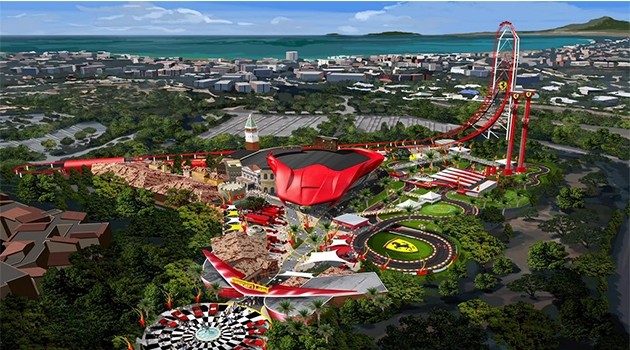 PortAventura Resort, Spain — The first stone of the Ferrari Land project was laid on May 7.  This new theme park dedicated to the Prancing Horse (Cavallino Rampante) will add to the offerings at PortAventura Resort, making it the destination with the highest number of theme parks (3) in Europe. This new park dedicated to Ferrari is expected to involve total investment close to 100 million Euros. Ferrari Land will cover an area of 75,000 square meters and offer a range of exciting attractions offering adrenalin and technology charged options for families mainly and fans of the Ferrari brand of all ages. The end of the construction phase of Ferrari Land is scheduled at the end of 2016.

This new partnership between Ferrari and PortAventura Resort will enable the latter to strengthen its leadership position among resort destinations in Europe and deliver an unbeatable experience to visitors. PortAventura Resort currently receives around 4 million visitors, 50% of which come from the international market.

PortAventura Parks is above all a journey around the world. In their areas, visitors discover the most traditional Mediterrània, the Polynesia of the great adventurers like Captain Cook, the imperial China, the Mexico of the Mayans, the wild Far West, or the familiar territory of SésamoAventura. The great challenge of the PortAventura development team was to create a project that faithfully reproduces the essence of Ferrari but is always respecting the imaginary dream trips that characterizes PortAventura Parks. The link between the two has been Italy, the country of origin of Ferrari and simultaneously one of the most important destinations with a world cultural heritage.

Ferrari Land is PortAventura Resort’s take on the Ferrari myth. It is a tribute to the technological excellence of the brand and to Ferrari’s role as a hallmark of Italian genius. Combined with the references to Formula 1 and innovation that you might expect, visitors will also find aspects of traditional Italy and allusions to the early days of the founder of the brand, Enzo Ferrari. 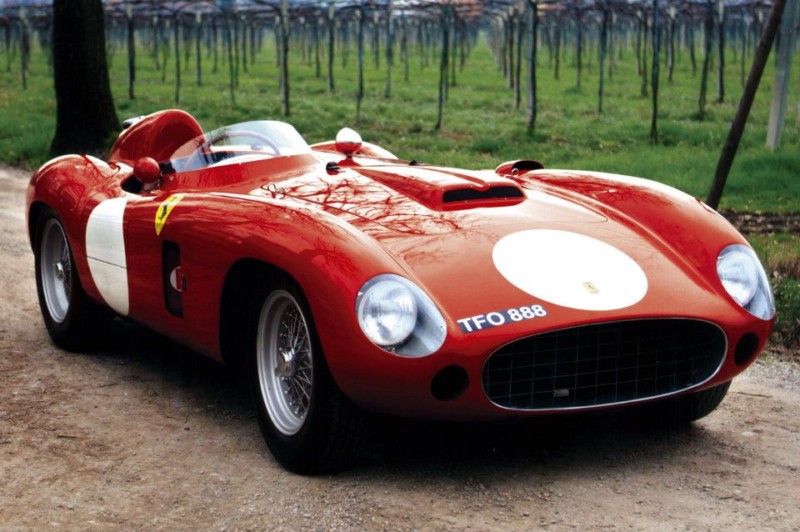 The Italy represented in Ferrari Land includes iconic buildings from Maranello, the town where Ferrari has its headquarters, and also architectural references to the great monuments representing Italian genius. These allusions to Italy and Mediterranean culture link the new park to the rest of the resort and particularly to the PortAventura theme park, which already has an area dedicated to the Mediterranean, as well as to the design of PortAventura hotel, inspired by a Mediterranean villa. The new park will be located in the area close to the main entrance of PortAventura Park and near the aforementioned hotel.

Designers kept in mind that Ferrari symbolizes above all a passion for technology and speed and these elements are highlighted at Ferrari Land in terms of thematic presentation and the attractions available. The PortAventura development team has been working closely with Ferrari in the planning and design of Ferrari Land.

Sergio Feder, PortAventura Executive Chairman, has highlighted that “From the outset, we have been clear about our intention to develop a long-term plan based on world-class international brands, with the aim of boosting the number of visitors and making PortAventura the best resort destination in Europe. We are very proud to be collaborating with an iconic brand like Ferrari that enjoys huge prestige across the planet and to be developing Ferrari Land Park together, exclusively for the whole of Europe.”

Ferrari Land will offer a variety of themed attractions and areas specially design for families, teenagers and Ferrari fans. As in previous occasions, some of these attractions will set new records within their categories and will become global references for the theme parks fans.

The vertical accelerator will be one of the big attractions of the new park. Manufactured by Intamin, the accelerator will be 112 metres tall, making it the highest roller coaster in Europe, beating Shambhala (76 metres) located at PortAventura Park. The accelerator will offer an amazing experience for fans of speed: passengers experience all the sensations of Formula 1, with acceleration of 180 km/h in just 5 seconds, equivalent to 1.35 G. They will be propelled vertically upwards instantly reaching 112 metres and then plummet straight down, at a maximum angle of 90 degrees.

The vertical accelerator will add to the long history of records that has characterized PortAventura Parks in its 20 years history: in 1995 it opened Dragon Khan, the rollercoaster with a higher number of loopings in the world (8). In 2007, it launched the fastest attraction in the world, Furius Baco. 2012 was the year of Shambala, actually the highest rollercoaster in Europe and 2013 marked the opening of King Khajuna at Costa Caribe Aquatic Park, the highest free fall slide in Europe. 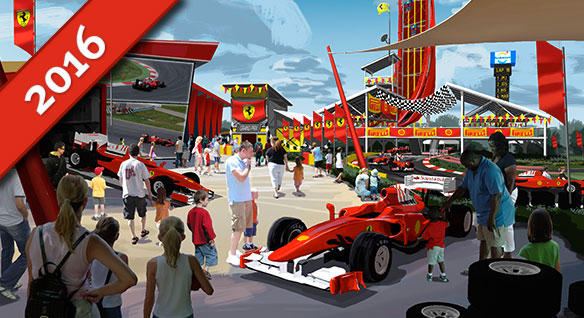 Ferrari Land is, without doubt, the single most important project in the history of PortAventura Resort. Never before has the resort made investment of this order in one single project. More than 50 companies will be involved in the different stages of the project and, when the park is open, it is expected to create up to 150 jobs (direct and indirect).

Once Ferrari Land has opened, PortAventura Resort expects to reach 5 million visits per year, largely thanks to the potential of the Ferrari brand to attract international visitors from traditional markets such as France, the United Kingdom or Russia, but also from new countries such as Germany, Benelux, Italy or Scandinavia. Positive impacts are also expected in the hotel sector, with over 1 million overnight stays per year.

Ferrari Land, like PortAventura Park and Costa Caribe Aquatic Park, will be an organic project that continues to develop over the next few years.

In recent years, PortAventura Resort has implemented a constant expansion strategy with the aim of making the resort a leading holiday destination in Europe. In pursuit of this goal, they have bet on an internationalisation strategy and included new projects each year; investing 200 million euros since 2009 including Ferrari Land.

Building a kids’ play area, SésamoAventura, was the first of these investments in 2011, followed a year later by the construction of Shambhala, the highest roller coaster in Europe. In 2013 it was the turn of Costa Caribe Aquatic Park, the resort’s water park, which was extended and equipped with record-breaking attractions.

2014 was a year of major projects with the construction of “Angkor: adventure in the lost kingdom”, which takes visitors on a boat ride through lush jungle full of challenging adventures. Last year, PortAventura Resort also initiated a long-term partnership with Cirque du Soleil, setting up a permanent base for the company in Europe over the summer season.

2015 is the 20th anniversary of PortAventura Resort. New shows have been created to celebrate this milestone with special anniversary galas. Moreover, there will be six themed “White Nights” (closing time extended until 4 in the morning) and a variety of special events including two “Oktoberfest”, two “Black Nights” in Halloween and “Christmas Night”, which promise to surprise customers with an unbeatable experience.

As regards hotels, the big news is the transformation of the Lucy Mansion into the first 5-star hotel at the resort, as well as the extension of the 4-star Hotel Gold River, with the addition of the new Callaghan Building. These two projects have entailed investment of 10 million euros and will allow offering 2,100 rooms at the resort.

From July 2th, PortAventura Resort will host the Cirque du Soleil again; the company will set up its base at the resort in July and August to perform the show “Amaluna”.

With this commitment to growth, PortAventura Resort has established a model of integrated offering similar Orlando (U.S.) or Sentosa (Singapore). In addition to the theme parks and hotels, the resort also operates a Convention Center with capacity for 4,000 people and takes part in the offer of 3 golf courses and a beach club resort located near the resort.

Joe Kleimanhttp://wwww.themedreality.com
Raised in San Diego on theme parks, zoos, and IMAX films, InPark's Senior Correspondent Joe Kleiman would expand his childhood loves into two decades as a projectionist and theater director within the giant screen industry. In addition to his work in commercial and museum operations, Joe has volunteered his time to animal husbandry at leading facilities in California and Texas and has played a leading management role for a number of performing arts companies. Joe previously served as News Editor and has remained a contributing author to InPark Magazine since 2011. HIs writing has also appeared in Sound & Communications, LF Examiner, Jim Hill Media, The Planetarian, Behind the Thrills, and MiceChat His blog, ThemedReality.com takes an unconventional look at the attractions industry. Follow on twitter @ThemesRenewed Joe lives in Sacramento, California with his wife, dog, and a ghost.
Share
Facebook
Twitter
Linkedin
Email
Print
WhatsApp
Pinterest
ReddIt
Tumblr
Previous articleCinemeccanica 6P Digital Laser Projection System to be Featured at 2015 Euromax Meeting
Next articlePHOTOS: Opening of Voyage to the Iron Reef from Knott’s Berry Farm and TRIOTECH