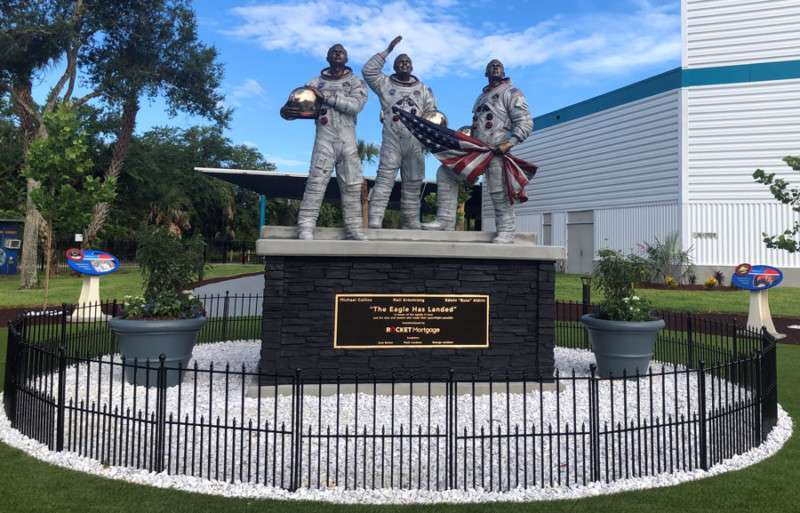 On July 12, Kennedy Space Center Visitor Complex kicked off the Apollo 11 50th anniversary celebrations by unveiling the Moon Tree Garden, a dramatic new accent to the grounds of the Apollo/Saturn V Center.

The garden, which features 12 trees grown from seeds that orbited the Moon, also includes a George Lundeen sculpture that depicts Apollo 11 astronauts Neil Armstrong, Buzz Aldrin and Michael Collins in their space suits. The statue, titled “The Eagle has Landed,” is a gift to Kennedy Space Center Visitor Complex from Rocket Mortgage by Quicken Loans, the nation’s largest mortgage lender.

“As the nation’s top mortgage lender, we treat the impossible as an opportunity,” said Casey Hurbis, chief marketing officer of Rocket Mortgage. “We presented this statue to Kennedy Space Center Visitor Complex to honor the courage and importance of the Apollo 11 mission, who achieved the impossible by landing man on the Moon and into the annals of history.”

The Moon Trees were provided by Rosemary Roosa, daughter of veteran Apollo 14 astronaut Stuart Roosa, and president of the nonprofit Moon Tree Foundation. The foundation was created in honor of her father, who took seeds from loblolly pine, sycamore, sweet gum, redwood, and Douglas fir trees on his space mission as part of a joint U.S. Forest Service/NASA project. The seeds, which have all orbited the Moon, were later germinated and planted around the world to share the story of the mission.

Since then, the Moon Tree Foundation continues to fulfill its mission by planting second-generation “Moon Trees” all over the world. The 12 trees in the Moon Tree Garden represent each crewed Apollo mission. The garden also includes a carving made from the original Moon Tree planted at Kennedy Space Center Visitor Complex that was lost during Hurricane Irma in 2017.

“We are excited to kick off our Apollo 11 celebrations at Kennedy Space Center Visitor Complex by officially opening the new Moon Tree Garden,” said Therrin Protze, chief operating officer of Kennedy Space Center Visitor Complex. “The garden and the life-size sculpture of the Apollo 11 crew are tributes to the outstanding accomplishments of the Apollo Program.”

At the center of the Moon Tree Garden, the seven-foot-tall bronze statue is set upon a four-foot-tall concrete base, which features an engraving that honors the Apollo 11 crew and all those who made their historic spaceflight possible. Other enhancements at the Apollo/Saturn V Center include a closer look at Lunar Module 9 and Command and Service Module 119, projection mapping on the side of the Saturn V Rocket, a 1969 period living room and bar scene, and much more.

The opening of the Moon Tree Garden is the first of many events taking place to mark the Apollo 11 50th anniversary. On July 15, Kennedy Space Center Visitor Complex will host a transformation celebration of the reimagined Apollo/Saturn V Center.

Some of the new exhibits include inside the Apollo/Saturn V Center include:

Moonscape – Engage in interactive challenges like landing the lunar module (LM) just like in Apollo 11. Plus, explore a 3D model to learn how the LM worked.

Touch the Moon – Feel like a part of the Moon landing as you leave your own footprints on the lunar surface below you. Then, take a moment to reach for the rock and touch the Moon!

Command Service Module – Get up close to a real command service module (CSM), the spacecraft that took astronauts to the Moon.

Fisher Space Pen – Learn about this pen’s ability to write in microgravity and its use in many space missions.

1960s Living Room and Bar – Imagine you and your family huddled around a television watching the Moon landing in this 1960s-era living room display and bar scene.

First Steps – Apollo astronaut Alan Bean’s mural, entitled First Steps, is an inspiring backdrop to an exhibit that showcases space-flown artifacts from Apollo 7 – 11 and how each played a critical role in the journey to the Moon.

The Saturn V Rocket – Learn about the team that built the most powerful rocket ever built, how it was made and how it was later assembled inside the Vehicle Assembly Building.

Perfect Trajectory – Explore the launch path of the Saturn V rocket through interactive displays and a highly detailed accompanying model.

Media Mania – Dive into the “media mania” of the Apollo era through cameras, media badges and other artifacts from before the digital age.

Getting to the Moon – Learn about the missions that lead up to the historic Moon landing, what we did on the Moon and how we plan to go back.

Projection Mapping – Captivating moments from the Apollo Program come to life with projected footage on the side of the Saturn V rocket.

Joe Kleimanhttp://wwww.themedreality.com
Raised in San Diego on theme parks, zoos, and IMAX films, InPark's Senior Correspondent Joe Kleiman would expand his childhood loves into two decades as a projectionist and theater director within the giant screen industry. In addition to his work in commercial and museum operations, Joe has volunteered his time to animal husbandry at leading facilities in California and Texas and has played a leading management role for a number of performing arts companies. Joe previously served as News Editor and has remained a contributing author to InPark Magazine since 2011. HIs writing has also appeared in Sound & Communications, LF Examiner, Jim Hill Media, The Planetarian, Behind the Thrills, and MiceChat His blog, ThemedReality.com takes an unconventional look at the attractions industry. Follow on twitter @ThemesRenewed Joe lives in Sacramento, California with his wife, dog, and a ghost.
Share
Facebook
Twitter
Linkedin
Email
Print
WhatsApp
Pinterest
ReddIt
Tumblr
Previous article
Kennywood hosts an all-star kickoff for its record-breaking Steel Curtain coaster
Next article
SP Immersive Entertainment and Pixomondo join forces to create experiential media-based attractions in China