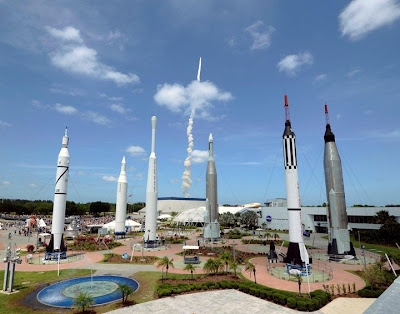 Beginning the program at 2 p.m. Sunday is the panel discussion, “Kennedy Space Center: Past, Present and Future,” at the Astronaut Encounter Theater. The select NASA panel is scheduled to include Carol Scott of the Program Control and Integration Office within the Commercial Crew Program, and Stu McClung of the Orion Crew/Service Module Office.

Scott will discuss how the Commercial Crew Program is facilitating commercial vehicle development and certification to enable the safe transportation of NASA astronauts to and from the International Space Station and other low-Earth orbit destinations. McClung will talk about the Orion spacecraft being developed to carry astronauts farther into the solar system than ever before. On July 2, NASA is marking the arrival at Kennedy Space Center of the first space-bound Orion spacecraft.

At 3 p.m. Sunday at the visitor complex’s NASA Central area, the 65-member Orlando Concert Band will present a musical salute to Kennedy Space Center with patriotic music and marches. Associate Music Director Aaron Lefkowitz will lead the band in such selections as “Armed Forces Salute,” “Apollo 13,” “America the Beautiful,” and “The Stars and Stripes Forever.”

Completing the program is Scott Bolton, principal investigator for NASA’s Juno mission to Jupiter, who will take visitors on a visual journey of recent scientific discoveries made as a result of exploration of the solar system. The presentation begins at 4:30 p.m. at Exploration Space.

The 50th anniversary programming is complimentary to guests with paid admission.

“This is a great occasion for everyone who loves John F. Kennedy Space Center,” said Bill Moore, chief operating officer of the visitor complex. “For 50 years, Kennedy has been the gateway to space, carrying astronauts into space aboard rockets and space shuttles, launching space exploration devices and constructing the International Space Station.

“We’re celebrating the many historic achievements of the space program over the last 50 years – which visitors can experience here like nowhere else – plus the exciting things going on today to prepareKennedy Space Center for commercial space flight and the Orion deep-space program,” Moore said.

On July 1, 1962, the space center was officially acknowledged as an operating spaceflight center under the name Launch Operations Center. The name was later changed to John F. Kennedy Space Center in honor of the president and his vision of Americans visiting the moon.

Earlier this year, Kennedy Space Center Visitor Complex celebrated another milestone in space history with the 50th anniversary of Americans in Orbit. On February 20, 1962, launching aboard a Mercury-Atlas rocket in the Freedom 7 capsule, John Glenn became the first American to orbit the Earth. Glenn circled the Earth three times, followed by a successful splashdown in the Atlantic Ocean.

In celebration of the 50th anniversary, Kennedy Space Center Visitor Complex is offering guests two special offers that can save up to 30 percent on admission, food and merchandise, as well as secure access to view rocket launches. Details of Kennedy Space Center’s 50th Gold Admission Package and a$50 Annual Pass are available at http://kennedyspacecenter.com/annual-pass-offer.aspx.

Visitors to Kennedy Space Center Visitor Complex currently have two rare tour opportunities. For the first time in more than 30 years, NASA is allowing guests inside the Launch Control Center – where NASA directors and engineers supervised all of the 152 launches for the space shuttle and Apollo programs, and inside the 525-foot-tall Vehicle Assembly Building (VAB), the massive building where the Apollo Saturn V rockets and space shuttles were assembled.

Kennedy Space Center Visitor Complex features many attractions and year-round interactive programs, including meeting real astronauts. The regular bus tour, included with admission, explores the history of the Apollo moon and space shuttle programs with panoramic views of launch pads and the VAB’s exterior and stops at the LC-39 Observation Gantry and the Apollo/Saturn V Center, where visitors see a fully restored, 363-foot Saturn V moon rocket and relive the historic Apollo missions that saw man land on the moon.

In addition, Kennedy Space Center Visitor Complex is the future home of the space shuttle Atlantis, with a multimillion-dollar exhibit expected to open in July 2013.

Joe Kleimanhttp://wwww.themedreality.com
Raised in San Diego on theme parks, zoos, and IMAX films, InPark's Senior Correspondent Joe Kleiman would expand his childhood loves into two decades as a projectionist and theater director within the giant screen industry. In addition to his work in commercial and museum operations, Joe has volunteered his time to animal husbandry at leading facilities in California and Texas and has played a leading management role for a number of performing arts companies. Joe previously served as News Editor and has remained a contributing author to InPark Magazine since 2011. HIs writing has also appeared in Sound & Communications, LF Examiner, Jim Hill Media, The Planetarian, Behind the Thrills, and MiceChat His blog, ThemedReality.com takes an unconventional look at the attractions industry. Follow on twitter @ThemesRenewed Joe lives in Sacramento, California with his wife, dog, and a ghost.
Share
Facebook
Twitter
Linkedin
Email
Print
WhatsApp
Pinterest
ReddIt
Tumblr
Previous articleCelebrate the 4th with Merlin Entertainments Attractions
Next articleCelebrate the 4th at America’s Traditional Amusement Parks