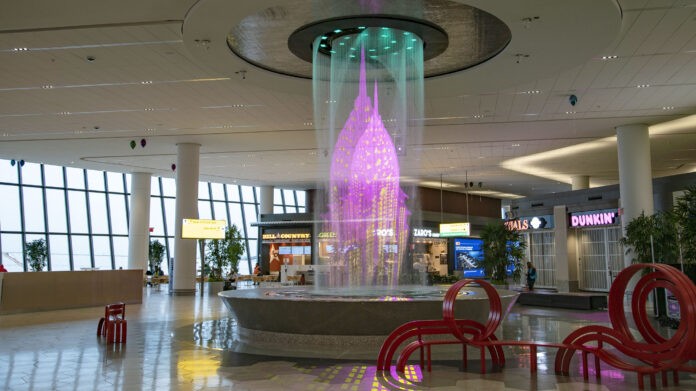 With the opening of the brand-new Terminal B Arrivals and Departures Hall at LaGuardia Airport, passengers expected an improved customer experience with the upgraded shops, eateries and amenities of a modern airport. But they didn’t anticipate an eye-catching water feature that enchants, calms and even informs travelers of all ages.

Located post-security on Level 4 of the Arrivals and Departures Hall, the water feature is comprised of two 25-foot tall concentric rings of falling water, which serve as the basis for a series of shows running continuously during terminal hours. Lighting effects and video projections mapped onto the water curtain are choreographed with musical scores in two signature shows celebrating New York City that play every 15 minutes between 7 am and 10 pm. Additional shows have seasonal and holiday themes or just create a relaxing mood as the falling water transforms itself into different abstract and figurative shapes. The result is an attraction that even the most jaded and harried traveler can’t resist stopping by to enjoy.

Manhattan-based Evoke Collaborative, whose artists support projects requiring artistic lighting, video or the latest technologies, was approached by LaGuardia Gateway Partners (LGP – the developer and manager of the new Terminal B) nearly three years ago to discuss creating a projection mapped water feature in the new terminal where 50,000 people are in transit on a typical day.

“As a lighting designer I’ve worked with fog curtains so I know how the physics of water curtains work, and our partner WorldStage can project onto everything,” says Evoke’s Herrick Goldman, who served as the project’s producer. But the terminal’s proposed showpiece was very different from the water curtains seen in theme parks, which are often in darkened, controlled environments, not in light, bright, airy spaces – the big selling points for the new terminal over its dreary predecessor. Falling water’s reflectivity, beautiful movement and light absorption don’t necessarily lend themselves to a huge room full of windows.

The kinetic nature of an airport terminal also posed challenges for the water feature’s content.

Travelers moving quickly through an airport may have “only a few seconds to make a connection with the images” displayed, says Evoke content director Brad Peterson. “You have to put your assets and effort into making each moment spectacular. But you can’t go crazy displaying 22 images in ten seconds or nothing will really land. Also, people on all sides of the water feature need to have an exciting view – there’s no hero position. No matter where they stand they have to get the gist of the story.”

The team at Aquatique Show had done some work with video projection on its water features and “gave us a primer going in – the biggest hits of what they knew,” says Peterson. “We wanted to use as much projection as possible, but we had to find out what was financially and technically practical.”

In September 2018 a preliminary trip was made to Aquatique Show’s home base in Strasbourg, France by Evoke producer/content director Lisa Renkel and WorldStage’s technical supervisor on the project John Ackerman. Founded in 1979, Aquatique Show is the world’s go-to company for the creation of magical water shows and water effects.

In France Renkel and Ackerman saw an example of the water feature and discussed how the water took the light, the angles of incidence and possible projector placement. Back home they talked through the system with their teams; drawings and systems design of the projectors and video gear occupied the next year from September 2018 to September 2019.

Renkel and WorldStage disguise media server programmer Raul Herrera traveled to Aquatique Show in November 2019 for a factory acceptance test of the actual feature. There they learned that “all the assumptions we made about image size were wrong,” says Ackerman, who serves as vice president of systems integration at WorldStage. “A lens change on the projectors was required to extend the video further down the feature. The structure of the falling water did not stay strictly columnar, and there were four jumping jets at the base, which made a cloud spray at the top where we wanted to focus the projectors for a hologram-like effect.”

Peterson points out that the water feature’s larger outer cylinder proved to be the most effective projection surface for photorealistic imagery and text while the inner cylinder acted as an accent to some of the video projection and as a dancing water effect on its own.

Beginning in September 2019 Renkel and Tracy Sandford, senior director of marketing and communications at LGP, discussed the broad themes of the shows’ content. Then Renkel created storyboards and imagery which Sandford, Zangen and Or honed while gathering input from the creative teams at Aquatique Show and Beta Petrol. Aquatique Show would program the water’s performance from the jets’ 2D clouds to actually spelling out words and changing shape from full concentric cylinders to half-round cylinders that wipe to full or transform into graceful twisting lattices.

Evoke creatives and Zangen prevised a majority of the content using a d3 media server “so non-technical people could get a real sense of how things looked on the water in a 3D environment,” Peterson explains.

“Herrick, Lisa and I have theater experience where the process is all about iteration,” he adds. “So we built into the schedule a theater tech-like process that allowed us to modify content. We built in time to iterate the design to achieve what we wanted.”

Evoke’s biggest fear had been that “all the windows and natural light in the terminal would make video projection on the water feature difficult to see, but we also knew the new Barco 40K laser projectors were stunningly bright,” says Goldman.

The Barco UDX-W40 projectors were essential to the project’s success even though they didn’t exist at the outset of the project. “We started with 30,000-lumen projectors, but by a miracle of modern commerce the 40K laser projectors were introduced in 2019 at essentially the same price, and we needed every one of those 40,000 lumens,” says Ackerman.

During the project’s development the projector count was upped from one to three to achieve 360º coverage. The three projectors are ceiling hung about 20-30 feet from the center of the water feature enabling travelers to get the hero shot view and complete surround exposure from any vantage point.

Aquatique Show mounted a ring of LED lights at the top of the water feature to bathe the jets and columns in colored light for water-only shows and to work in concert with projection mapped content.

Marshall pan-and-tilt cameras are also positioned at the top of the water feature and can point to the water or the audience. The cameras hold the promise of audience interaction with content in the future and currently enable remote monitoring of the attraction.

The project’s biggest challenge turned out to be one nobody could have foreseen: the coronavirus pandemic, which locked down New York City just as the water feature and projectors were installed in March 2020. “We perceived all the other challenges – working in an active construction site, airport security issues, having a small control room,” says WorldStage project manager Erica Blumrosen. “But COVID-19 threw a wrench into equipment delivery on site and forced us to rethink schedules and crewing so we could work six feet apart in a small control room and do frequent COVID testing. This was my first big install project with WorldStage, and it was memorable on a lot of different fronts.” Show programming couldn’t begin until September 2020 when Aquatique Show was able to return to the US.

In the meantime, “a tech system had to be designed for an install of this scale that required long-term service and support,” notes Peterson. “So much technology had to talk to each other: video projectors, sound, very bespoke water control software, lighting, master control to keep it all in synch. And the workflow had to be designed so non-technical staff at the airport could manage it. That’s what WorldStage is good at. The system needed to run as seamlessly as possible, and WorldStage did that in spades without ever limiting us creatively.”

“We’ve been building integrated systems for decades,” says Ackerman. “Our control systems have been advanced by the increased use of technology on Broadway and by video’s integration with mechanical automation. And we were an early adapter of media server technology.”

On site in the terminal a small control room is the PLC-based head end for the water feature and equipment control housing disguise gx 2 and gx 1 media servers that run the shows, Cisco network switches and a Sierra Video 3G matrix switcher, among other gear.

A separate field rack docks at a column next to the water feature and exports system control to the head end; water feature programming is typically not done on site although it can be done through a built-in programming extension. A secure VPN monitors the health of the system remotely.

“Our entire projection system communicates with the water system so the schedule runs water and play shows at certain times,” says Blumrosen. “A timeline varies the mini-shows based on the time of day to display a variety of content if travelers are waiting and get to spend time watching the water feature.”

The attraction’s start and stop triggers are automated but an “easy to understand” graphical control system can be used when the airport’s non-technical staff needs to intervene, she adds.

“Our motto for every job is to build conservatively and leave ourselves options, so there’s headroom in every step in the process,” Ackerman reports. “We’ve created a nice neat, well thought out system that enables the content and overall design to shine.”

The reviews are in

“When we were still doing the install and the airport opened up for a few flights it was wonderful to see people stop and watch and enjoy the water feature,” says Blumrosen.

Now that airline travel has resumed more LaGuardia Terminal B passengers are getting a chance to see the water feature.

“Kids are completely stunned by it,” Goldman notes. “And people keep tagging it on Twitter and posting it on Instagram. It’s worth getting to the terminal an hour early just to watch the content.”

“It’s been exciting to be part of this project,” says Peterson. “The work and thought that went into making something spectacular has not gone unnoticed. Adults are engaged by the water feature, and kids run up to it and are amazed. When times are so uncertain, it’s nice to see content that shows off New York and the great times that we hope are coming back soon.”