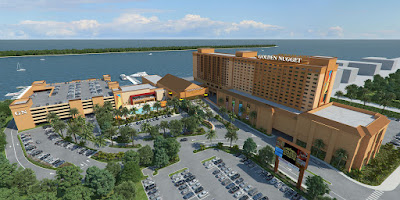 “We’ve been looking to extend the Golden Nugget’s footprint to Biloxi for years and we’re excited to make major changes to the property and to the South, a personal interest of mine,” said Fertitta. “The Golden Nugget transformation will rejuvenate Biloxi, much as we have helped rejuvenate Downtown Las Vegas and most recently the Marina District in Atlantic City.”

The Golden Nugget Biloxi will serve as a premier resort destination in the South, offering guests 720 rooms and suites. Plans for the property will enhance the appearance and reputation of the third largest casino hotel in the Biloxi/ Gulfport marketplace. Extensive transformational renovations to the Golden Nugget Biloxi will include a brand new, expanded casino floor, new bars, restaurants, stylish retail offerings and updated rooms and suites. There will be a high energy Rush Lounge to complement a remodeled spa and poker room. For those who want to enjoy the outdoors, an innovative H2O Resort Pool and Ultra Lounge will offer all season hot tubs and fire pits. Together these enhancements and additions will deliver an exhilarating experience unlike anything available in Biloxi.

The property will begin its $100 million transformation in January, 2013. All improvements are expected to be completed by March, 2014.

The Golden Nugget has strong brand recognition worldwide, following multi-million dollar investments and transformations making each property one of the top hotel-casinos in Las Vegas, Atlantic City and Laughlin. Landry’s plans to bring the same type of energy and notoriety to the Biloxi property in 2013.

ABOUT LANDRY’S, INC.
Landry’s is a national, diversified restaurant, hospitality and entertainment company principally engaged in the ownership and operation of high end and casual dining restaurants, primarily under the names of Landry’s Seafood House, Rainforest Cafe, McCormick & Schmick’s Seafood Restaurant, The Chart House, Bubba Gump Shrimp Co., Claim Jumper, Saltgrass Steak House and Oceanaire, as well as a fine dining signature group of restaurants: Morton’s Steakhouse, Vic & Anthony’s, Grotto, Willie G’s and others. The Company is also engaged in the ownership and operation of gaming, hospitality and entertainment businesses, including the Golden Nugget Hotel & Casinos in Las Vegas and Laughlin, Nevada, and Atlantic City, the Kemah Boardwalk, the San Luis Resort Complex, and the Downtown Aquariums in Denver and Houston. Landry’s and Mr. Fertitta’s affiliated companies will generate approximately $2.5 billion in revenues in 2012.

Joe Kleimanhttp://wwww.themedreality.com
Raised in San Diego on theme parks, zoos, and IMAX films, InPark's Senior Correspondent Joe Kleiman would expand his childhood loves into two decades as a projectionist and theater director within the giant screen industry. In addition to his work in commercial and museum operations, Joe has volunteered his time to animal husbandry at leading facilities in California and Texas and has played a leading management role for a number of performing arts companies. Joe previously served as News Editor and has remained a contributing author to InPark Magazine since 2011. HIs writing has also appeared in Sound & Communications, LF Examiner, Jim Hill Media, The Planetarian, Behind the Thrills, and MiceChat His blog, ThemedReality.com takes an unconventional look at the attractions industry. Follow on twitter @ThemesRenewed Joe lives in Sacramento, California with his wife, dog, and a ghost.
Share
Facebook
Twitter
Linkedin
Email
Print
WhatsApp
Pinterest
ReddIt
Tumblr
Previous articleRyan Miziker joins Rhythm & Hues Special Projects Division
Next articleNight Safari Entices Singapore With Preview of Mystica