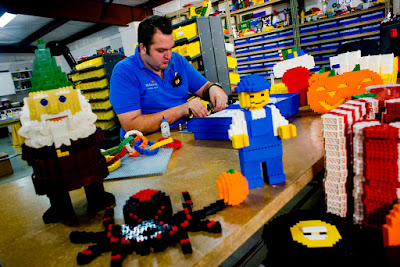 “Master Model Builders are royalty here at the park,” said General Manager Adrian Jones. “They enjoy celebrity status and when they’re not being interviewed by reporters and paparazzi, they spend eight hours a day playing in the model shop. Who in their right mind wouldn’t want this job?”

Would-be builders must first submit a short video clip of themselves and a home-made LEGO® creation. Candidates will be culled through Facebook voting, then invited to the park December 1 and 2 to participate in a series of skills tests. Details on the video submission and the search are available at http://Florida.LEGOLAND.com/MMB.

“In all seriousness, this is the most important job at the park,” said Jones. “Our builders typically have a life-long love of LEGO, are wildly imaginative, extraordinarily detailed and focused and just love what they do. If you have a passion for play, we encourage you to apply.”

The new Master Model Builder will be expected to report for duty January 1 and will join two other builders and a team of animators and technicians to build and maintain the signature LEGO models featured throughout the 150-acre family theme park.

The park features more than 50 rides, shows and attractions designed for families with children ages 2 to 12. LEGOLAND Florida is located 45 minutes between Orlando and Tampa.

For the most current information, log on to www.LEGOLAND.com .

LEGOLAND® Florida is a 150-acre interactive theme park dedicated to families with children between the ages of 2 and 12. With more than 50 rides, shows and attractions and the all-new water park, LEGOLAND is geared towards family fun! There are currently four other LEGOLAND Parks in the world – LEGOLAND California in Carlsbad, LEGOLAND Billund in Denmark, LEGOLAND Deutschland near Gunzburg, Germany and LEGOLAND Windsor outside of London and just opened LEGOLAND Malaysia —the sixth LEGOLAND Park and first in Asia. The LEGOLAND theme parks are a part of Merlin Entertainments Group, the second largest attractions operator in the world.

MERLIN ENTERTAINMENTS is the leading name in location-based, family entertainment, and has seen the most successful and dynamic growth of any company in the sector over the last five years. Europe’s Number 1 and the world’s second-largest visitor attraction operator, Merlin now operates more than 90 attractions, seven hotels/two holiday villages in 21 countries across four continents. The company aims to deliver memorable and rewarding experiences to its 46 million visitors worldwide, through its iconic global and local brands, and the commitment and passion of its managers and more than 20,000 employees. Merlin currently has seventeen attractions in the USA including the stunning LEGOLAND Florida theme park with its new Water Park; LEGOLAND California theme park with its exciting Water Park, and SEA LIFE Carlsbad Aquarium (LEGOLAND California Hotel is opening in summer 2013); Madame Tussauds attractions in New York, Washington, D.C., Las Vegas, Nevada and Hollywood, California; LEGOLAND Discovery Centers in Chicago, Illinois; Dallas/Fort Worth, Texas; Kansas City, Missouri; and Atlanta, Georgia; and SEA LIFE aquariums in Phoenix, Arizona; Kansas City, Missouri; Dallas/Fort Worth, Texas; the Mall of America in Minneapolis, Minnesota underlining the company’s position as the world’s biggest global aquarium operator.

Joe Kleimanhttp://wwww.themedreality.com
Raised in San Diego on theme parks, zoos, and IMAX films, InPark's Senior Correspondent Joe Kleiman would expand his childhood loves into two decades as a projectionist and theater director within the giant screen industry. In addition to his work in commercial and museum operations, Joe has volunteered his time to animal husbandry at leading facilities in California and Texas and has played a leading management role for a number of performing arts companies. Joe previously served as News Editor and has remained a contributing author to InPark Magazine since 2011. HIs writing has also appeared in Sound & Communications, LF Examiner, Jim Hill Media, The Planetarian, Behind the Thrills, and MiceChat His blog, ThemedReality.com takes an unconventional look at the attractions industry. Follow on twitter @ThemesRenewed Joe lives in Sacramento, California with his wife, dog, and a ghost.
Share
Facebook
Twitter
Linkedin
Email
Print
WhatsApp
Pinterest
ReddIt
Tumblr
Previous articleEndeavour Pavilion Opens to Public at California Science Center
Next articleLOOKING FOR A NEW HOME?