From EPCOT to Monterey Bay, Leonard Nimoy’s Legacy in Attractions Stretches to the Next Frontier 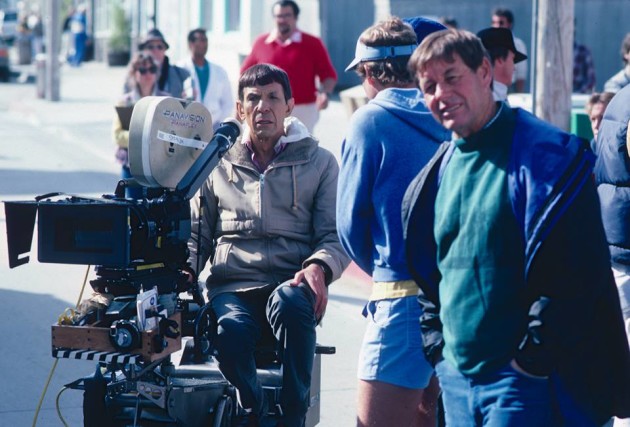 Los Angeles, CA, USA (March 3, 2015) — Actor Leonard Nimoy, best known for his portrayal of half human/half Vulcan science officer Mr. Spock on the 1960s television show Star Trek and its subsequent films, passed away at the age of 83 on February 27.  His Los Angeles Times obituary can be found here.

From the appearance of Spock’s likeness, costumes, and props in traveling exhibtions, a Las Vegas attraction, and a Seattle science fiction museum to Nimoy’s successful career as a film director, and friend of giant screen films and planetariums, his life has closely intersected the themed attractions industry.

One of his first forays into attractions was in 1975, when visitors to Ripley’s World of the Unexplained in San Francisco and Gatlinburg, Tennessee, were introduced on film by Nimoy to what mysteries awaited them inside.

In 1986, Nimoy’s second foray at directing a theatrical film, Star Trek IV: The Voyage Home, transformed the Monterey Bay Aquarium into the Cetacean Institute and, through the magic of Industrial Light & Magic and other effects wizards, populated it with two humpback whales.

From 1988 to 1994, Universal Studios Hollywood showcased the $7 million Star Trek Adventure, which incorporated footage filmed with park guests as extras on a stage set into pre-existing footage from the Star Trek films.

Nimoy directed the film portions of Body Wars, the motion simulator ride inside EPCOT’s Wonders of Life pavilion that operated from 1989 to 2007.  The ridefilm starred Tim Matheson and Elisabeth Shue.

Nimoy was also involved in the giant screen and planetarium fields.  He narrated the 1994 IMAX documentary Destiny in Space as well as a 1998 planetarium show produced by the SETI Institute, Other Worlds! Other Beings?

In 2001, Nimoy and his wife Susan contributed $1 million to the Griffith Observatory’s capital campaign. The Observatory named its new presentation theater the Leonard Nimoy Event Horizon in his honor. Throughout the day, the theater plays The Once and Future Griffith Observatory a film that provides an “exciting and compelling introduction to the history and unique public offerings of the Observatory.” Narrated by Nimoy, this 24-minute film reveals how the vision of one man led to the creation of an architectural, cultural, and astronomical icon for southern California. The film offers an overview of the Observatory’s programs and exhibits and discusses how the building was renewed during the 2002-2006 renovation and expansion project.

Whether through promoting the exploration of outer space, the vision of visiting inner space, or the quest to communicate with other species on our world and others, Nimoy’s imprint on the attractions industry will, in the words of Spock, “live long and prosper.”

Joe Kleimanhttp://wwww.themedreality.com
Raised in San Diego on theme parks, zoos, and IMAX films, Joe Kleiman would expand his childhood loves into two decades as a projectionist and theater director within the giant screen industry. In addition to his work in commercial and museum operations, Joe has volunteered his time to animal husbandry at leading facilities in California and Texas and has played a leading management role for a number of performing arts companies. Joe has been News Editor and contributing author to InPark Magazine since 2011. HIs writing has also appeared in Sound & Communications, LF Examiner, Jim Hill Media, and MiceChat. His blog, ThemedReality.com takes an unconventional look at the attractions industry. Follow on twitter @ThemesRenewed Joe lives in Sacramento, California with his fiancé, two dogs, and a ghost.
Share
Facebook
Twitter
Linkedin
Email
Print
WhatsApp
Pinterest
ReddIt
Tumblr
Previous articleThe Republic Interactive Themed Experience Launches Kickstarter Campaign
Next articleMedia Matrix Completes Museum Installations in Oklahoma and Oregon with Alcorn McBride Technology