Alterface: A Desperado, with pirates 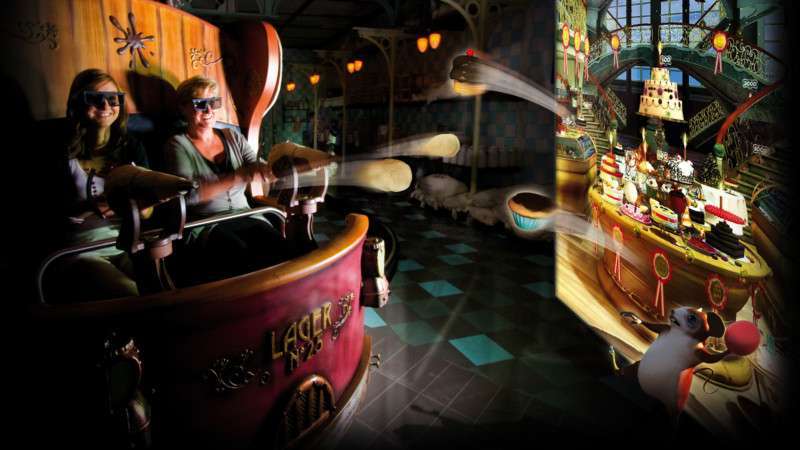 Benoit Cornet’s ride from corporate finance to Alterface and interactivity

ABOVE: Maus au Chocolat at Phantasialand in Bruhl, Germany Photo courtesy of Alterface

Alterface Projects is a pioneering leader in mediabased, interactive attractions, with installations throughout the US, Europe, Middle East, and China. Company founder Benoit Cornet had previously applied his business and financial acumen to a number of other industries until a chance encounter brought him into attractions.

“I started with a conventional career,” he says. “I graduated from Ichec Brussels Management School in 1988 with a Master of Science in Business Engineering; I also earned a post-graduate degree in business-to-business marketing 10 years later as a refresher.” Immediately after graduating from Ichec, he joined Procter & Gamble as a financial analyst.” But he soon realized that “conventional” was not for him. “I was part of a bigger jigsaw puzzle, and sought a more creative challenge.”

Benoit joined the European arm of Scitex, an Israeli printer company. Over time, he had the freedom to shape aspects of his position, becoming Sales Manager for After Sales Service. He could exercise creativity and become a productive interface. “Because I was in the after sales side, I saw where our technology and product could and should be improved to better serve the customers’ needs, and I brought that information to my employers.”

Benoit moved on from Scitex when the opportunity arose to co-found a tech startup, Paspartoo, with a colleague. “We embraced using the power of the Internet for printer technology. In 2000, we introduced a system to print over the Internet. It was unique, but it was ready long before the infrastructure was.” The ambitious Paspartoo was unfortunately ahead of its time, and paid the price. The company began running out of cash. It was time to move on again.

The road to Desperado

Benoit set out to find a new position with the kind of interesting, creative and trans-cultural challenges that motivated him. “All of my work since Scitex has had a trans-cultural dimension,” he says. “This is what I like so much at Alterface today.”

It was the post-Paspartoo exploration that set Benoit on a path to working in the attractions industry. By chance, he encountered two students working on an EU-financed university project, creating an augmented reality-type magic mirror. “I had seen ‘The Matrix’ and I saw potential in this,” he says. The first “Matrix” movie was released in 1999, and life imitated art: “I helped transition this from a research into a commercial product.” In 2001, Alterface was born. He created business models and presented the concept to potential investors, which led to a number of installations using the technology in the form of an interactive game that uses a visual image of the player on screen during play – an pioneering example of gamification. “One of the very first of these exhibits is still operating in Brussels, in Mini Europe,” reports Benoit. “I spent 5-6 years on that and brought in a few customers, but determined it was too complicated, ultimately, to make a business out of. That’s when I transitioned to interactive theaters.”

Alterface’s first interactive theater was the Desperado theater, which opened in 2006 at a 56-seat installation at BobbejaanLand in Belgium and at a 36-seat installation at Fraispertuis City, France. In the attraction, guests would sit on saddles while a 2D film played an engaging and funny Western story and visitors shot pistols at the screen as if in a shooting gallery. Desperado would prove to be a flagship, one of Alterface’s most enduring attractions. Benoit points out, “We have always marketed them as Interactive Theaters, yet people have been referring to them as ‘desperados,’ sometimes resulting in requests such as, ‘I want a desperado with a Pirate Theme.’”

This first attraction by the company was made through trial and error. “We pitched the idea to the customer without ultimately knowing what the end result would be.” But Benoit’s vision was borne out in the Desperado. He had found the direction he sought, and his customers wanted it, too.

Throughout the years, Alterface has conducted extensive internal testing on potential projects, giving them an idea of what people enjoy and what doesn’t work. The company also extensively analyzes the sense of humor in a market. After all, what works in Europe may not carry over well in Asia, and vice versa.

Once an attraction opens, engineers typically stay on location for one to two weeks for fine tuning, as do lighting and sound designers. Sometimes, minor changes are needed, as with Maus au Chocolat at Germany’s Phantasialand. “We discovered a couple of weeks later that it would be better to add something engaging between the show scenes. Our show control system allowed for a quick adjustment to the ride.”

Over the years, Alterface grew to a staff of 30, but is now subcontracting what Benoit calls “the exoskeleton” of the business. The company’s offices are now home to the animation computers and a small shop for the integration of components, but it is the company’s partners who are bringing their tools and expertise to many key areas.

Throughout his career, Benoit has sought out the most unique and promising technologies. The company’s newest products, NOMAD and Erratic, like Desperado before it, are designed to be game changers in the world of interactive attractions. NOMAD is the fourth generation of the company’s interactive software, which began with tethered guns on Desperado and then moved on to wireless weapons and tools for dark rides. NOMAD is completely wireless and self-powered and can be configured in a variety of shapes and sizes. It allows guests to interact with screens, animatronic characters, or scenery on dark rides or even coasters. NOMAD uses a unique ID system, relating specifically to its user. Benoit says, “The possibilities are endless. You can impact a particular scenario or even an entire attraction.”

While NOMAD creates an interaction with the environment, Erratic enhances the experience from the ride system point of view. Developed in conjunction with Alterface collaborator ETF, the ride system now becomes an interactive element of the ride itself, with guests having the ability to alter the trajectory based on their input. Erratic and NOMAD can be integrated individually into an attraction or can be used together to create a one-of-a-kind interactive ride experience.

Since its founding in 2001, Alterface has seen increasing demand for interactive theaters and dark rides worldwide. The company delivers both off-the-shelf and custom products.

“More and more, we are seeing a trend for higher quality dark rides in the larger parks,” says Benoit. “To meet this demand, we’re introducing two new divisions. Alterface Technologies will offer services for dark rides developed by others [such as the Justice League: Battle for Metropolis attractions at the Six Flags parks], while Alterface Creative will help customers develop their own original concepts. This is great for smaller regional parks.”

To meet increased demand, Alterface has also brought in a new team of localized designers to come up with new track layouts and IP. In addition to its headquarters in Belgium, the company has offices in the United States and Taiwan, with a fourth office in Beijing. China is an important growth market for the attractions industry and Benoit visits the country an entire week out of every month. “It’s very important that our attractions are culturally relevant in China,” he says. “That’s why we’re totally embracing the Chinese culture and the Chinese way of having fun.”

Benoit Cornet, who once saw the future in printing over the Internet, looks ahead at what the future has in store for the interactive attractions industry. “Interactivity will go out of building and will expand throughout the park. Gamification will be the name of the game. Right now, there are only a few large players in the industry, but people will want an experience making sense that may change from one visit to another instead of just a group of attractions. Because of this, entertainment will go to shopping malls. This is already very strong in China, because space is scarce. We’ll end up reverting to a more playful experience.” • • •

Joe Kleimanhttp://wwww.themedreality.com
Raised in San Diego on theme parks, zoos, and IMAX films, InPark's Senior Correspondent Joe Kleiman would expand his childhood loves into two decades as a projectionist and theater director within the giant screen industry. In addition to his work in commercial and museum operations, Joe has volunteered his time to animal husbandry at leading facilities in California and Texas and has played a leading management role for a number of performing arts companies. Joe previously served as News Editor and has remained a contributing author to InPark Magazine since 2011. HIs writing has also appeared in Sound & Communications, LF Examiner, Jim Hill Media, The Planetarian, Behind the Thrills, and MiceChat His blog, ThemedReality.com takes an unconventional look at the attractions industry. Follow on twitter @ThemesRenewed Joe lives in Sacramento, California with his wife, dog, and a ghost.
Share
Facebook
Twitter
Linkedin
Email
Print
WhatsApp
Pinterest
ReddIt
Tumblr
Previous articleLexington, a Nassal company: Cut the ribbon!
Next articleDNP: Photo printing snapshot