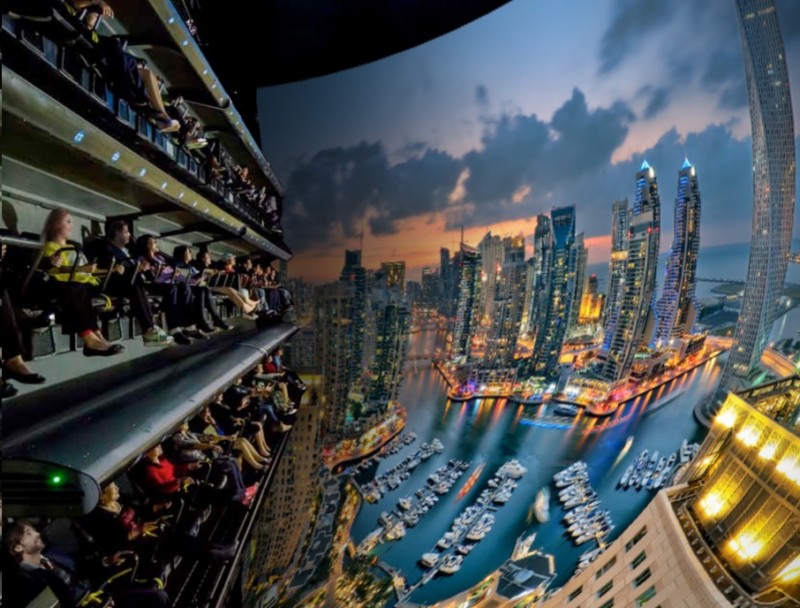 Currently in previews and opening to the general public on December 17, L’Extraordinaire Voyage brings a modern sensibility to a classic Jules Verne story while introducing Europe’s first flying theater to Parc Futuroscope in Poitiers, France. 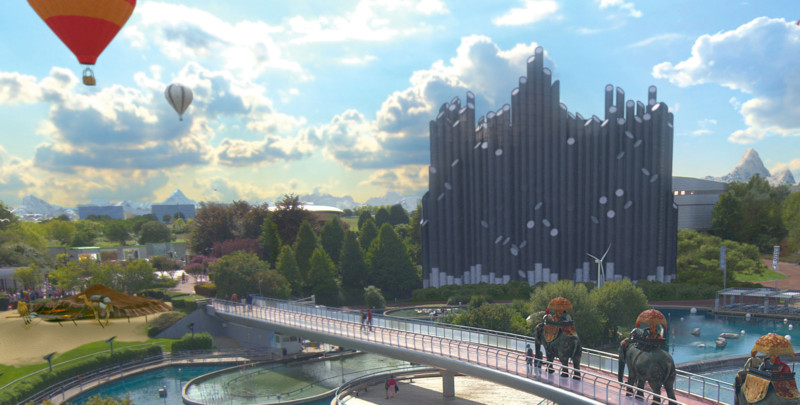 Replacing the Tapis Magique, or Magic Carpet, which since 1992 had shown specialty films on a pair of IMAX screens located at the front of the theater and underneath a glass floor, the new attraction loosely follows the fictional route of the classic Verne novel “Around the World in 80 Days.”  Scenes along the updated journey include Futuroscope, the pyramids of Egypt, base jumping off the skyscrapers of Dubai, a kite festival at India’s Taj Mahal, the Himalaya, and hot air balloons over Yellowstone National Park in the United States.  The attraction’s film was animated by Paris-based studio Cube Creative.

Once inside the preshow, guests encounter kid-friendly displays about Jules Verne.  They then enter SkyWorld, a futuristic transport terminal for a briefing video and simulated shuttle trip to SkyLoop, the vehicle on which they’ll be traveling the globe. 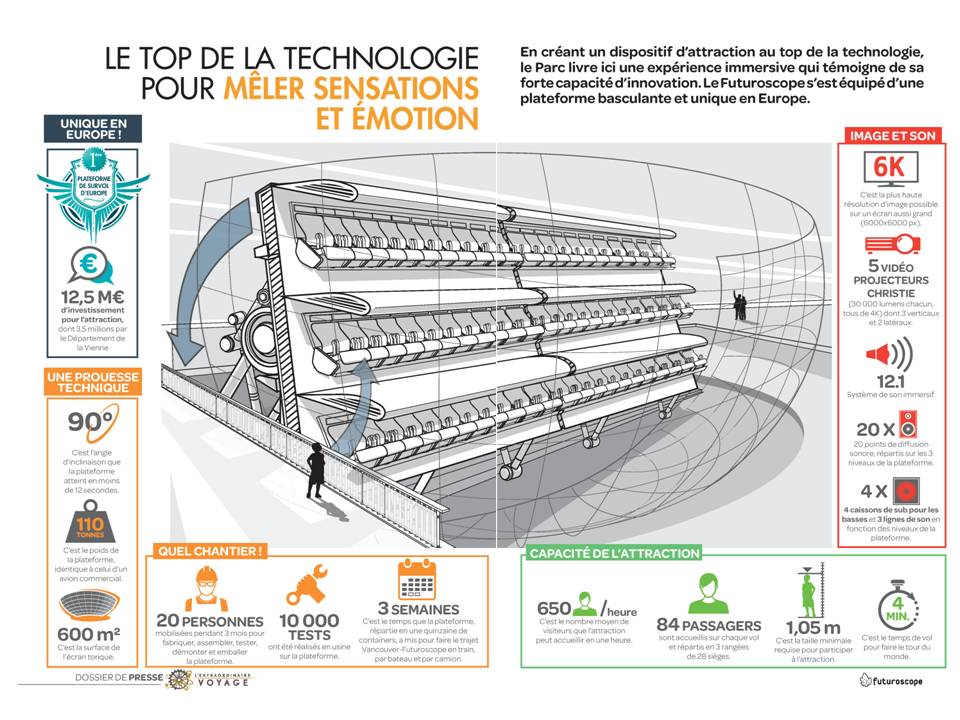 SkyLoop is a Dynamic Flying Theatre from Dynamic Attractions.  Seating 84 passengers, the motion base, which tilts 90 degrees for flight, is similar to the one that opened in August at Seattle’s Wings Over Washington, profiled in InPark issue 62.  Projection is provided by five Christie 4K projectors, with a total pixel output of 6000 x 6000 (6K).

L’Extraordinaire Voyage has been in development since September 2013, with Futuroscope overseeing design and implementation of the attraction.

Joe Kleimanhttp://wwww.themedreality.com
Raised in San Diego on theme parks, zoos, and IMAX films, InPark's Senior Correspondent Joe Kleiman would expand his childhood loves into two decades as a projectionist and theater director within the giant screen industry. In addition to his work in commercial and museum operations, Joe has volunteered his time to animal husbandry at leading facilities in California and Texas and has played a leading management role for a number of performing arts companies. Joe previously served as News Editor and has remained a contributing author to InPark Magazine since 2011. HIs writing has also appeared in Sound & Communications, LF Examiner, Jim Hill Media, The Planetarian, Behind the Thrills, and MiceChat His blog, ThemedReality.com takes an unconventional look at the attractions industry. Follow on twitter @ThemesRenewed Joe lives in Sacramento, California with his wife, dog, and a ghost.
Share
Facebook
Twitter
Linkedin
Email
Print
WhatsApp
Pinterest
ReddIt
Tumblr
Previous articlePresident Obama Approves Minnesota’s Bid for EXPO 2023
Next articleReimagined Harry Potter Exhibit at Warner Bros Studio Tour Hollywood Now Includes Fantastic Beasts