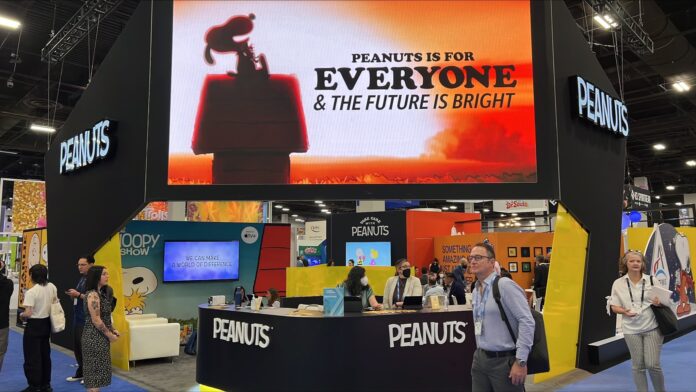 This year, Licensing Expo placed an emphasis on location-based entertainment and InPark Magazine was there, exploring the booths and chatting with a number of people in the industry. Licensing Expo took place at the Mandalay Bay Convention Center in Las Vegas, a return to the Expo as a live event for the first time in three years.

One thing that differentiates this trade show from others is that the majority of booth space is taken up by tables and chairs. This is where meetings take place and deals are made, as many of the world’s top entertainment, character, fashion, art and corporate brand owners and agents interact in person with consumer goods manufacturers, licensees and retailers.

Brand leverage is an excellent way to stand out in a crowded marketplace.”

IAAPA in the house

While on the show floor, we ran into current IAAPA Chair Ken Whiting and the organization’s CFO, Josh Powers. According to Whiting, a delegation from Licensing Expo visited the IAAPA Expo in Orlando last fall and, while there, invited IAAPA to send a delegation to Las Vegas. On the Expo, both Whiting and Powers were impressed. “I do believe we will see incredible growth within amusement parks, attractions, and all types of location-based entertainment attractions with the use of different brands,” said Whiting. “Brand leverage is an excellent way to stand out in a crowded marketplace.”

Falcon’s Beyond, the result of a partnership between Katmandu Group and Falcon’s Creative, made two major announcements during Licensing Expo. One involved the group licensing properties from Moonbug Studios, which will be integrated into Falcon’s location-based entertainment centers and its resort in Punta Cana, in the Dominican Republic. Falcon’s is also taking existing Katmandu IP and, through a deal with Epic Story Media, will begin presenting the brand’s stories and characters outside of parks and attractions through video games, an animated series, and a card game. According to Falcon’s Beyond CEO Cecil Magpuri, “It’s a lot easier to do deals like these when you own and operate the venues and the characters.”

Learning from the fans and really listening to them and recreating your experiences based on what they’re looking for from your brand continually creates something authentic.

George Wade of Bay Laurel Advisors moderated the keynote panel “From Dream to Reality: The Power of Brand Licensing for Location-Based Entertainment,” featuring panelists Stacie Cohen of the NBA, Susan Vargo of Moonbug, Stacy Moscatelli of SuperflyX, and Cecil Magpuri of Falcon’s Beyond. Wade and Magpuri began by reminiscing about their time at Iwerks Entertainment, where they licensed the film property “Robocop” for the company’s motion simulator systems, the first time a film had been licensed from a major studio by a ride company. “It’s interesting to think about how intellectual property gets in this lane of LBE,” said Magpuri, “Obviously there are LBEs out there that are bespoke and have their own IPs. Not all LBEs are leveraging existing IPs. If you are embracing the LBE lane for your IPs, some of the challenges are what is it going to be? There are all these different types of immersion experiences that are out there. What’s the right one for your IP?”

According to Moscatelli, repeatability is a highly critical factor in developing attractions. “A brand like Friends isn’t going out of style, but we’re always thinking about how to refresh the attraction, how to create opportunities for fans to engage as much as they want, and even what seasonal overlays we can do. We like to create an opportunity for fans to come back and a reason to come back.”

An important point for Vargo, who used to oversee licensing for Nickelodeon, to include in the discussion is “the amount of money involved from the investment that our partners put in place when they take on board our brands, and the repeated investment to refresh and to keep things exciting for our fans. These can often be very long-term, highly capital intensive, long-tailed deals. If you have a brand that has so much resonance, some of these deals are in market 10, 15, 20 years, and so they’re highly complicated and it’s not just the ticket revenue at the door. There are sponsorship elements, merchandise elements, and there are ways to create an entirely new brand experience through a merchandise element.”

“There are definitely moments in your career where you’re saying, ‘Get the Barbie hairstylist on the flight tomorrow’ or ‘Tuck in these jerseys or we’re never going to be able to use these photos,'” shared Cohen. “There’s these little moments where I’m wondering how do I even have this knowledge in my head? But you accumulate it and you pass it on to your brand partners also. Those little details truly are what gets picked up by the fans. It’s about learning your brand, doing a really immersive kickoff with your partners, and then checking it throughout and continually learning from your fans. When I was working on Thomas the Tank Engine, the fans would notice if, out of a few hundred trains and characters, one was missing. So learning from the fans and really listening to them and recreating your experiences based on what they’re looking for from your brand continually creates something authentic.”

this is bringing everything together under one roof. It’s really exciting and the enthusiasm is at an all-time high.

Throughout the show floor, a few booths highlighted licensed LBE products. Hasbro featured London’s Monopoly Lifesized attraction and Transformer and My Little Pony-themed rooms from an upcoming themed hotel in Shanghai. Also featured at the booth was a Transformers-based virtual reality game played in a Hologate Arena.

Feld Entertainment® featured a VR motion simulator ride aboard one of one of its monster trucks from its Monster Jam® Franchise. According to Jeff Bialosky, Feld’s Senior Vice President of Global Partnerships, the Licensing Expo delegation had seen the simulator at IAAPA Expo and asked Feld to bring it to this year’s show in Las Vegas. The company will be bringing back the Ringling Bros. and Barnum & Bailey® Circus in 2023, this time without animals. Bialosky shared that the circus used to have to curtain off one end of the arena due to the animal cages being in the area. Now, without animals, it’ll be a full circus-in-the-round (see full interview video below).

Both Warren Schorr of Crayola and Craig Herman of Peanuts Worldwide found this year’s expo to be a great place to meet with potential licensees (view Crayola interview below). According to Herman, “From my perspective, this is really one of the first Licensing Expos that we’re seeing a lot of developers and operators who are looking for IP at Licensing Expo. Normally it’s IAAPA or IAAPA Asia, but this is bringing everything together under one roof. It’s really exciting and the enthusiasm is at an all-time high.”

Joe Kleimanhttp://wwww.themedreality.com
Raised in San Diego on theme parks, zoos, and IMAX films, InPark's Senior Correspondent Joe Kleiman would expand his childhood loves into two decades as a projectionist and theater director within the giant screen industry. In addition to his work in commercial and museum operations, Joe has volunteered his time to animal husbandry at leading facilities in California and Texas and has played a leading management role for a number of performing arts companies. Joe previously served as News Editor and has remained a contributing author to InPark Magazine since 2011. HIs writing has also appeared in Sound & Communications, LF Examiner, Jim Hill Media, The Planetarian, Behind the Thrills, and MiceChat His blog, ThemedReality.com takes an unconventional look at the attractions industry. Follow on twitter @ThemesRenewed Joe lives in Sacramento, California with his wife, dog, and a ghost.
Share
Facebook
Twitter
Linkedin
Email
Print
WhatsApp
Pinterest
ReddIt
Tumblr
Previous articleCrayola Names New Vice President of Location-Based Entertainment Business
Next articleSeaWorld San Diego expands food & beverage portfolio