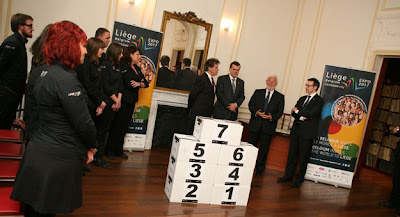 Paris, France (November 8, 2012) — On Monday 5 November, 154,931 signatures collected during the Belgian public petition campaign were sent to the Bureau International des Expositions. The members of the Belgian team arrived in the early afternoon with boxes of signatures under their arms. Willy Demeyer (Mayor of the City of Liège), Michel Firket (Vice-President of Liège Expo 2017) and Jean-Christophe Peterkenne (CEO of Liège Expo 2017) were able to hand deliver these signatures to the Secretary General of the BIE Vicente Loscertales.  The signatures were physically collected at over 150 events in Belgium , giving staff the opportunity to meet Belgian citizens and explain the ins and outs of Liège Expo 2017. In addition, over 40,000 signatures were collected virtually via the Internet.

Meanwhile, on 18 October 2012 the Kazakh film Astana Expo 2017: The Great Expectation of Kazakhstan, made at the request of the Ministry of Economic Development and Trade of Kazakhstan was awarded the second-place prize – a silver dolphin –  in the Corporate Films category of the annual Cannes Corporate Media & TV Awards festival in Cannes. The film was made to promote the bid by Astana for the right to host the International Exhibition EXPO 2017.

IPM News will provide continuing coverage of the two EXPO 2017 candidate city bids through the BIE decision next month.

Joe Kleimanhttp://www.themedreality.com
Raised in San Diego on theme parks, zoos, and IMAX films, Joe Kleiman would expand his childhood loves into two decades as a projectionist and theater director within the giant screen industry. In addition to his work in commercial and museum operations, Joe has volunteered his time to animal husbandry at leading facilities in California and Texas and has played a leading management role for a number of performing arts companies. Joe has been News Editor and contributing author to InPark Magazine since 2011. HIs writing has also appeared in Sound & Communications, LF Examiner, Jim Hill Media, and MiceChat. His blog, ThemedReality.com takes an unconventional look at the attractions industry. Follow on twitter @themedreality Joe lives in Sacramento, California with his fiancé, two dogs, and a ghost.
Share
Facebook
Twitter
Linkedin
Email
Print
WhatsApp
Pinterest
ReddIt
Tumblr
Previous articleTom Hanks is The Happiest Man on Earth
Next articleNew PrimeTime Amusements Division to Showcase Work of Artist Miguel Paredes at IAAPA 2012

Thailand applies to host Specialized Expo 2027/28, second to apply after US