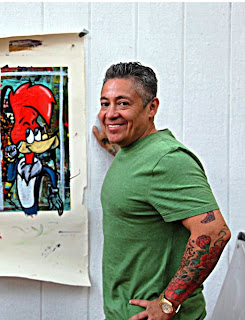 Fort Lauderdale, FL, USA (November 7, 2012) — Art Basel, known as one of the most prestigious art shows in the Americas for its groundbreaking visual art, is finally making an appearance at the International Association of Amusement Parks and Attractions (IAAPA) with a showcase of a Basel staple artist, Miguel Paredes. Prop Creations, the new theming division of PrimeTime Amusements, a global operator, seller and event renter of video arcade machines and simulators, will be featuring South Florida artist Paredes’ signature work at the IAAPA Attractions Expo 2012, which takes place Nov. 12-16 at the Orange County Convention Center in Orlando, Florida. Life-size, 3-D foam statue renditions of the characters from Paredes’ paintings will fill PrimeTime Amusements’ booth along with video games and a bowling alley.

“PrimeTime Amusements is thrilled to do something unique and innovative that has never been done before,” said David Goldfarb, President of PrimeTime Amusements. “By bringing an internationally known artist’s work to life – we are showing how our Prop Creations division can build anything you can imagine! This brings a whole new dimension to the typical family entertainment center and that’s exciting.”

Three of Paredes’ iconic paintings will be recreated in 3D, including “Lucky Cat,” “Happy Buddha with Pulghas,” and “Pulgha Rising.” After the pieces are brought to life by PrimeTime Amusements’ CNC 3-D Cutting Machine, each will be detailed and carved by the team’s sculptor before Paredes individually paints each character by hand. Parts of the statues will be featured in PrimeTime Amusements’ IAAPA booth (#1303) and ultimately moved to Paredes’ gallery in Miami Beach during Art Basel (December 6-9, 2012).

“I’ve been doing art and sculpting my entire life. I am excited to work with the team at PrimeTime Amusements,” said Paredes. “Not only are they working with the most advanced equipment, but they are truly skilled craftsmen. I am confident that will do my art justice while helping to bring it life!”

About Prop Creations
Prop Creations is headed up by an art designer and team of sculptors with 40-years plus experience. All statues are primarily constructed from foam and hard-coated with paint, which ensures that the finished products are lightweight and easy to transport, yet waterproof with the ability to be kept outdoors. The PrimeTime Amusements’ team creates the pieces using a combination of CNC 3-D Cutting machinery and hand sculpturing. With the ability to create props, figures, and set-design, PrimeTime Amusements has become a one-stop solution for everything from architectural design and engineering to arcade game sales and operations. Learn more at www.propcreations.com.

About Miguel Paredes
Miguel Paredes was born in New York in 1966. He is an artist and urban realist who combines the exhilarating sense of New York graffiti art with the skill and perceptiveness of a truly exceptional artist. Growing up on 72nd Street in the Upper West Side of Manhattan, Paredes exuded early signs of artistic ability and accepted an invitation to New York City’s prestigious Fiorello La Guardia High School of Music and Art – immortalized in the musical and movie Fame – in the early 1980s. Paredes left New York to come to bourgeoning Miami Beach and took a studio at the Art Center of South Florida, where he became one of their most prosperous artists, focusing on mixed media and conceptual art. At one of his first showings he sold every piece in the exhibit and broke solidly into the Miami Beach art scene. His artistic success caught the attention of several local venues and they often offered their space to showcase Paredes’ work. He ultimately opened his own gallery, Miguel Paredes Fine Art Gallery, in the Wynwood Arts District in August 2010. Paredes is breaking new ground in exciting and innovative art movements. He continues to make his mark by further expanding his inspirational environment and simultaneously showcasing his works at local, national and international shows. In 2012, Paredes has upcoming exhibitions planned in London, China, and Seoul. Korea. Learn more at www.miguelparedes.com.

Joe Kleimanhttp://wwww.themedreality.com
Raised in San Diego on theme parks, zoos, and IMAX films, InPark's Senior Correspondent Joe Kleiman would expand his childhood loves into two decades as a projectionist and theater director within the giant screen industry. In addition to his work in commercial and museum operations, Joe has volunteered his time to animal husbandry at leading facilities in California and Texas and has played a leading management role for a number of performing arts companies. Joe previously served as News Editor and has remained a contributing author to InPark Magazine since 2011. HIs writing has also appeared in Sound & Communications, LF Examiner, Jim Hill Media, The Planetarian, Behind the Thrills, and MiceChat His blog, ThemedReality.com takes an unconventional look at the attractions industry. Follow on twitter @ThemesRenewed Joe lives in Sacramento, California with his wife, dog, and a ghost.
Share
Facebook
Twitter
Linkedin
Email
Print
WhatsApp
Pinterest
ReddIt
Tumblr
Previous articleLiège and Astana Continue Campaigns for EXPO 2017
Next articleLightswitch Opens Sixth Office in Hong Kong