Lions, Bison, and Keverbaan, Oh My! New Attractions and Enhancements at Bellewaerde 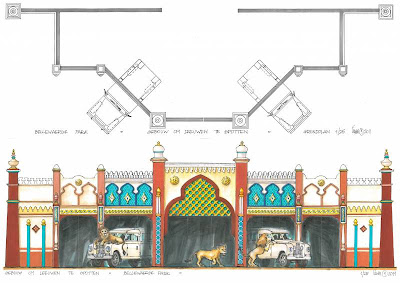 Ypres, Belgium — Another month and Bellewaerde Park looks forward to opening its doors for another season. Currently, the park is in full swing at preparations. At several places, large intensive work has begun to prepare for the opening with new surprises on March 31.

Each year, Bellewaerde Park launches numerous investments in the park to improve the quality and comfort and to provide better and new experiences to visitors. This year’s investment program is 2.2 million euro.

For some time there were more animals to be encountered in the Far West section of the park, but now it is no longer the case! Changing this, four European bison will stay in a brand new enclosure built in front of the Keverbaan attraction.  Bison are the largest mammals in Europe. The park consciously chose the European variant of the buffalo because it belongs to an endangered species, endangered since World War II. So as part of participation in an EAZA program, Bellewaerde Park is joining in the breeding program of the animal group, consisting of 3 females and 1 male.

Also this season, those who want to admire the lions closer without taking the “Bengal Express” train can look forward to a pleasant alternative. Before long, the kids can watch the king of beasts and his fellow female behind the wheel of a “Lion-Tuned Jeep.”  Two suitable all-terrain vehicles will be placed in a building built of 22mm thick laminated safety glass. The new observatory will be built in a lion decor and Bengal style and will be located right next to the train station for the “Bengal Express.”

In addition to work for the bison and lions, many other enhancements are currently are in progress. At various places in the park, crews and workers are busy with renovation, maintenance and repair. The Keverbaan will be improved and adorned with a new body. A soundproof wall is being built around this attraction. The track and structure of the Boomerang were steam cleaned and repainted with a new color in the Mexican spirit. The gift shop at the main entrance will have a completely original look and the car park overlooking Menin Road will be widened.

Joe Kleimanhttp://wwww.themedreality.com
Raised in San Diego on theme parks, zoos, and IMAX films, Joe Kleiman would expand his childhood loves into two decades as a projectionist and theater director within the giant screen industry. In addition to his work in commercial and museum operations, Joe has volunteered his time to animal husbandry at leading facilities in California and Texas and has played a leading management role for a number of performing arts companies. Joe has been News Editor and contributing author to InPark Magazine since 2011. HIs writing has also appeared in Sound & Communications, LF Examiner, Jim Hill Media, and MiceChat. His blog, ThemedReality.com takes an unconventional look at the attractions industry. Follow on twitter @ThemesRenewed Joe lives in Sacramento, California with his fiancé, two dogs, and a ghost.
Share
Facebook
Twitter
Linkedin
Email
Print
WhatsApp
Pinterest
ReddIt
Tumblr
Previous articleSevern-Lamb Continues to Strengthen Ties With Drayton Manor
Next articleDisney’s Bob Iger Remarks on Theme Park Developments