The Brief
LM Productions Ltd. was commissioned by Cityneon (an exhibition specialist) on behalf of the Omani Government to design, construct, program and deliver the Oman Pavilion, at the Yeosu Exposition 2012, with a multisensory experience to promote the country of Oman and its ecological vision for the future, complimenting the Expo theme of ‘The Living Ocean and Coast’. 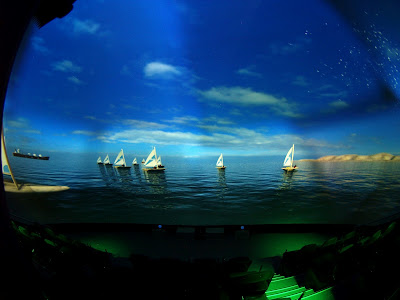 The Objective
The Sultanate of Oman required a theatre to appeal to visitors within a theme of conservation and regeneration of the marine environment as set by Yeosu Exhibition’s theme. The Omani Sultanate was eager to provide an experience that embodied the history and culture of the Omani people throughout the ages in marine explorations, the protection of marine natural resources and their unique and distinctive sea traditions.

The Solution
LM Productions designed an inflated structure to fully immerse the audience and create a perfect curved projection canvas made up of 9 million pixels. Eight 6000 lumen projectors were used to map the screen seamlessly displaying a combined total of 52,000 lumens.

LM Productions added 44 motion seats with air blast special effects and 3 axes of movement to give the audience the feeling of physically making the journey projected before them, diving into the ocean, swimming around rocks and flying behind jet aeroplanes. A high-quality 7.1 surround audio system played the custom soundtrack. Additional effects increased the multisensory experience including aromascent machines with frankincense and sea ocean scents, a haze machine and a full colour 2 watt laser with wide angle lens to fully immerse the audience in Oman’s ecological vision for the future.

LM Productions programmed the theatre to give a whole-room synchronisation so that each and every element in the theatre could be controlled at the push of a button, which completed the all-encompassing feeling of the experience in the specially designed theatre.The 4D theatre took four months of planning and design, three months of content creation and four weeks to build and program before the first preview show on 21 April and public opening on 12 May. The show runs until 12 August, six times every hour from 9am until 9pm.

The Results
LM Productions designed an immersive curved screen which would be fully self-supported once inflated. It is unique in its ability to expand and contract certain sections to create a real sense of depth and 3D to the content which is mapped to the dynamic structure (this avoids the need for 3D glasses). With sustainability in mind, the structure is able to be deflated, transported and re-installed anywhere in the world.

LM Productions installed state-of-the-art technologies including solid state media servers for control which provide an ultra-high resolution playback system, a projection system which runs content at 3000 by 3000 and has the ability to run up to 8k resolution, the newest generation of motion platform seating comprising of 44 seats offering full scope of movements as well as in-seat effects and finally, the latest solid state laser projector utilising special optics in order to cover the ultra-wide projection screen. The laser was used to enhance the video imagery as well as create special effects within the theatre.

The brief was a complex one with many different elements and, the unusual nature of the brief, along with the need for animation in a fish-eye format, meant there were quite a lot of specifics to be adhered to, not least the importance of the accuracy of the content since it was also to be entertaining, engaging and informative as well as geographically accurate.

Many reference videos and photographs were studied during the creation process and every aspect of the film required the consideration of all the other aspects involved in the immersive theatre space.

LM Productions were given four months in which to plan, design and install the theatre and three months to create the five-minute CGI film. Hundreds of individual fish, plant, boats, animals and objects were modelled, painted and animated to create one smooth, seamless animation which was mapped to the immersive screen.

As part of the initial delivery, LM Productions even created a mock-up theatre presentation in its demonstration studios in order to preview the technology and content creation to the client and representatives from the Sultanate of Oman.

The creative team was headed up by Stephen Harvey reporting to HK Kok of Cityneon, supported by a team committed to creating an amazing experience. LM Productions were able to provide the client with a full solution, not only concept and design, but also hardware, content creation, installation and finally day to day operation.

There are several unique solutions to this installation, the first and perhaps the most difficult was to create a projection surface which not only was immersive but also had the ability to have mapping features move in and out of the screen.

As part of this Expo project LM Productions looked at all aspects of sustainability and as such will be re-installing the 4D theatre into Oman after the Expo has ended.

The chairman of the exhibition organising committee, Kang Dong Suk, was quoted saying he was “impressed by the way the Omani pavilion utilised technology in […] the 4D cinema […] saying that he would urge Korean officials to visit the Omani pavilion and benefit from the expertise and experience of Oman…”. (Oman Tribune, 28/5/12).

The theatre is hosting on average over 3,000 visitors per day.

Judith Rubin
Judith Rubin ([email protected]) is a leading journalist, publicist, strategist, blogger, content marketing specialist and connector in the international attractions industry. She excels at writing about all aspects of design and technical design, production and project management. Areas of special interest include AV integration and show control, lighting design and acoustics, specialty cinema, digital video and world’s fairs. Judith has ties to numerous industry organizations. From 2005-2020 she ran communications, publications and social media for the Themed Entertainment Association (TEA). In 2013, she was honored with the TEA Service Award. She was development director of IMERSA, and co-chair of the 2014 IMERSA Summit. She was publicist for the Large Format Cinema Association in the 1990s, now part of the Giant Screen Cinema Association (GSCA) and has also contributed to the publications of PLASA, IAAPA and the International Planetarium Society. Already making her mark as a magazine and book editor, Judith joined World’s Fair magazine in 1987, which introduced her to the attractions industry. Launching as a freelancer in the mid 1990s she has contributed to dozens of publications and media outlets including Funworld, Lighting&Sound America, Sound & Communications, Urban Land, The Raconteur and The Planetarian. She joined InPark in 2010. Judith earned a Bachelor of Fine Arts from Pratt Institute. She has lived in New York City and the San Francisco Bay Area, and now makes her home in Saint Louis, where she is active in the local arts and theater community.
Share
Facebook
Twitter
Linkedin
Email
Print
WhatsApp
Pinterest
ReddIt
Tumblr
Previous articlePreliminary program and speakers for SATE 2012 at Disneyland Paris, 19-21 Sept
Next articleNik Wallenda Returns to Silver Dollar City After Crossing Niagara Falls On High-Wire