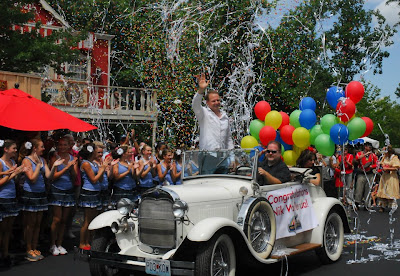 Branson, MO, USA (June 20, 2012) /PRNewswire/ — Just days after his historic high-wire walk across Niagara Falls in the dark of night, aerialist Nik Wallenda was welcomed back to the Silver Dollar City theme park in Branson, Missouri with a cacophony of celebration. Costumed performers led a parade amid cheering fans, confetti and all-around American fun in a welcome back to the daredevil legend.

Having just days earlier opened his high-wire show at Silver Dollar City, a show that includes his wife, mother and other family members, Wallenda left for the Niagara Falls event with an attitude that whether a wire is 30 feet above the stage, or strung across the Falls, he must treat it with intense care. “I could get hurt just as easily on a wire here as walking over Niagara Falls – I never want to get complacent,” he said.

During today’s event Wallenda stopped to address the crowd, speaking of following one’s dreams. “It’s awesome that I could pursue my own dream and inspire people around the world in the process – I hope to make a difference by motivating others to follow their own dreams.”

Touted as one of the most viewed TV stunts ever with some 13 million people watching ABC Network, tens of thousands at the live June 15th event, and a massive immeasurable number via social media, Wallenda, 33, became the first person ever to walk a wire across the brink of the falls, having changed laws in two countries to do so.

Wallenda performs in Branson through August 4th, marking his second summer in the southwest Missouritown known for live entertainment, and one that is already familiar with Wallenda’s first-ever stunts. Last summer he performed acrobatics, including hanging by his teeth, 200 feet above the ground on a trapeze suspended from a helicopter over the park’s packed 4,000-seat amphitheater.

Joe Kleimanhttp://wwww.themedreality.com
Raised in San Diego on theme parks, zoos, and IMAX films, Joe Kleiman would expand his childhood loves into two decades as a projectionist and theater director within the giant screen industry. In addition to his work in commercial and museum operations, Joe has volunteered his time to animal husbandry at leading facilities in California and Texas and has played a leading management role for a number of performing arts companies. Joe has been News Editor and contributing author to InPark Magazine since 2011. HIs writing has also appeared in Sound & Communications, LF Examiner, Jim Hill Media, and MiceChat. His blog, ThemedReality.com takes an unconventional look at the attractions industry. Follow on twitter @ThemesRenewed Joe lives in Sacramento, California with his fiancé, two dogs, and a ghost.
Share
Facebook
Twitter
Linkedin
Email
Print
WhatsApp
Pinterest
ReddIt
Tumblr
Previous articleLM Productions profiles its work on the Oman Pavilion at Yeosu Expo 2012
Next articleHistoric Roadside Attraction Finds New Home at Fossil Discovery Center