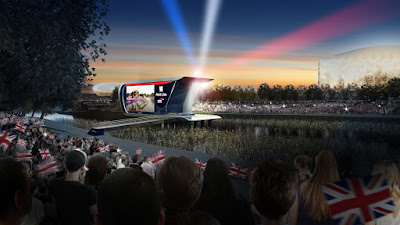 London, England /PRWEB/ — Plans were unveiled to enable thousands of spectators to cheer on live sporting action in the Olympic Park, hear from medal winning athletes and enjoy a picnic on the new riverside lawns at Park Live Presented by British Airways, right in the heart of the Olympic Park.

The London 2012 Organising Committee (LOCOG) has teamed up with official airline partner British Airways to create a dedicated area for up to 10,000 fans at a time with giant screens and picnic lawns in acres of newly created parklands in the Olympic Park. ‘BA Hosts’, made up of volunteers from the airline and their families, will also be on hand to help visitors.

At the heart of the plans for Park Live is a giant double-sided screen in the River Lea broadcasting live London 2012 coverage. Sitting in a newly created natural amphitheatre, Park Live plans to offer a host of entertainment including interviews with athletes on the British Airways presentation stage, allowing fans to hear first-hand from medal-winning athletes and other stars, and short films on the creation of the parklands.

Park Live will be set in the centre of the wetland bowl, within the newly created 250 acre parklands, which provides new green space for people and wildlife as well as spectacular views of the Olympic Park venues and London landmarks. It features riverside spectator lawns, timber seating, frog ponds, loggeries, wildflower meadows, woodlands, tree-lined footpaths and reed beds with over 30 species of native reeds, rushes, wet wildflowers and irises.

Chair Seb Coe said: ‘Whether it’s “Halsall Hill”, “Pistorious Park” or “Dai Greene Fields” our plans for Park Live will create a green and colourful place for fans to cheer their heroes and soak up the Olympic Park atmosphere. With lush lawns surrounded by wildflower meadows and rustling reeds, a trip to Park Live will be a truly unforgettable experience.’

Olympic gold medal winner Denise Lewis said: ‘It’s fantastic that British Airways is presenting Park Live, it looks like it could be the “Henman Hill” of the Games. I know the athletes, their families and guests at the Olympic Park will be thrilled to have a dedicated place for people to come together.’

British Airways managing director of brands and customer experience Frank van der Post, said: ‘Park Live Presented by British Airways will be the place for fans to go, cheer on Team GB and ParalympicsGB and give them some home support. It will be open to all guests on the Olympic Park before or after they’ve watched an event, or simply as a destination in itself. We’re looking forward to offering a great experience and dedicated area to watch all the action live.’

Park Live will be set in the newly created wetland bowl in the north of the Olympic Park which features:

Joe Kleimanhttp://wwww.themedreality.com
Raised in San Diego on theme parks, zoos, and IMAX films, InPark's Senior Correspondent Joe Kleiman would expand his childhood loves into two decades as a projectionist and theater director within the giant screen industry. In addition to his work in commercial and museum operations, Joe has volunteered his time to animal husbandry at leading facilities in California and Texas and has played a leading management role for a number of performing arts companies. Joe previously served as News Editor and has remained a contributing author to InPark Magazine since 2011. HIs writing has also appeared in Sound & Communications, LF Examiner, Jim Hill Media, The Planetarian, Behind the Thrills, and MiceChat His blog, ThemedReality.com takes an unconventional look at the attractions industry. Follow on twitter @ThemesRenewed Joe lives in Sacramento, California with his wife, dog, and a ghost.
Share
Facebook
Twitter
Linkedin
Email
Print
WhatsApp
Pinterest
ReddIt
Tumblr
Previous articleHistory Colorado Center Now Showcasing State’s History in State of the Art Facility in Downtown Denver
Next articleElectrosonic Engineers and Installs Exhibits for European Parliament Visitor Center