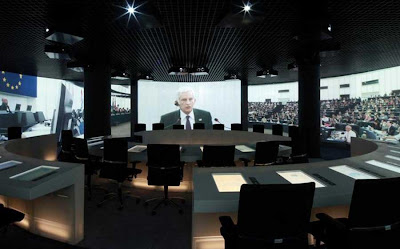 Los Angeles, CA, USA — The Parlamentarium, the new visitors’ center at the European Parliament in Brussels, uses a variety of interactive multimedia exhibits to take visitors on a unique and personal journey into the heart of European Politics. Electrosonic engineered and installed the main exhibition audio-visual hardware for Stuttgart-based designer Atelier Bruckner. The Parlamentarium is the first visitors’ center fully accessible in 23 languages, and to-date has attracted over 110,000 visitors from across the globe.

Guided through state-of-the-art exhibitions by a personal electronic multimedia guide, visitors see how policy decisions are made and how they influence Europeans’ daily lives. All signage and media is presented in 23 languages, which had an enormous influence on how AV techniques were used throughout the center.

Electrosonic won the bid for the project in an open Europe-wide competitive tender; the scope of work consisted of the detailed design, supply, installation, set up and commissioning of the media hardware for different themed exhibition areas. These areas include a pair of 360º theatres, nearly 100 LCD panels, an innovative voxel display featuring 13,000 LED globes, 140 computers, multichannel audio, 40 km of signal cables and 18 racks of equipment. Electrosonic also integrated RFID hardware for customized, language specific handheld Multimedia Guides supplied by NOUS of Austria; they consist of repackaged Apple iPod Touch units augmented by RFID technology to provide customized interactivity, including exhibit activation in the visitors’ preferred language.

The first series of exhibits orients visitors to the European Parliament and outlines the European Union’s history. Among them are “Prologue,” featuring a 33-foot long table with models of the principal European Parliament buildings backed by a five-bar LED ticker tape-style display from the UK’s Message Maker Displays, and “Treaty Tables,” showcasing a number of 40-inch table-format LCD touchscreens, which outline the documents that have produced the current EU.

“Today and Tomorrow” features an interactive “Calendar” with a sliding LCD panel that reveals information about each week’s principal events, plus an LCD touchscreen panel to access bios of the 754 Members of the European Parliament (MEPs). Three “Polling Booths” allow visitors to ‘vote’ on current issues, and then compare their opinions with those of other visitors and MEPs on the LED “Results Ceiling” display.

The big show at the Parlamentarium is the 12-minute 360º presentation, “A Parliament for Europe,” where visitors can listen to debates, watch votes and learn the legislative process. Fourteen Panasonic PT D6000ELK projectors produce an edge-blended image across a total screen area of approximately 1,600 square feet. Information on the MEPs is available via 36 19-inch touchscreens set into visitors’ desks. Another 360º show, “Europe in Daily Life,” is shown in a second theatre with a similar projection configuration, plus 22 touchscreens in custom housings with 15.4-inch widescreen portrait orientations.

Electrosonic supplied a Dataton WATCHOUT system to provide the synchronized playout, edge-blending and warping required for the shows; the system also delivers timecode to the NOUS media guides to synchronize the multi-language commentaries.

“United in Diversity” features the “Ground of Stories” exhibit where a 2,260-square foot floor map of Europe is embedded with 600 RFID tags. Visitors run 12 trolley-like mobile displays over the map to learn more about certain places. Each mobile display uses a webcam in its base to show an image of what’s on the floor; when it detects a tag, the monitor displays detailed information about the location in the visitor’s own language. The long-lasting, battery-operated mobile displays were built by exhibit fabricator Bruns and fitted out by Electrosonic.

A 131×1-foot ticker tape-style display from Message Maker Displays in the UK surrounds the exhibit, showing continuous European statistics and opinion poll results. Overhead a “Sky of Opinions” voxel display, developed by Latvia-based Atlantic Star under sub-contract to Electrosonic, uses 13,000 spherical LED-based elements arranged in a three-dimensional array that mirrors the map on the floor. The LEDs interpret the data presented on the ticker in color and graphical form.

Electrosonic delivered, installed and fine-tuned the hardware in collaboration with no less than nine other companies, on a working site that brought together 700 workers. The contribution of Electrosonic’s engineers was decisive to overcoming the many conceptual and technical difficulties inherent to a project at the cutting edge of pedagogy and technology.

In most cases, Electrosonic mounted all source equipment in racks in a dedicated control room. To meet the need for continuous updating, a dual media server system with RAID storage is networked to all machines.

Among the equipment furnished by Electrosonic were media servers, video source and interactive computers from DVS in the UK; NEC 40- and 46-inch displays; Fohn and KEF loudspeakers; and Cisco network switches.

Joe Kleimanhttp://wwww.themedreality.com
Raised in San Diego on theme parks, zoos, and IMAX films, InPark's Senior Correspondent Joe Kleiman would expand his childhood loves into two decades as a projectionist and theater director within the giant screen industry. In addition to his work in commercial and museum operations, Joe has volunteered his time to animal husbandry at leading facilities in California and Texas and has played a leading management role for a number of performing arts companies. Joe previously served as News Editor and has remained a contributing author to InPark Magazine since 2011. HIs writing has also appeared in Sound & Communications, LF Examiner, Jim Hill Media, The Planetarian, Behind the Thrills, and MiceChat His blog, ThemedReality.com takes an unconventional look at the attractions industry. Follow on twitter @ThemesRenewed Joe lives in Sacramento, California with his wife, dog, and a ghost.
Share
Facebook
Twitter
Linkedin
Email
Print
WhatsApp
Pinterest
ReddIt
Tumblr
Previous articleLondon Olympics Creates Park Live as New Fan Hub in Olympic Park
Next articleAsian Attractions Expo 2013 Will Take Place at Marina Bay Sands in Singapore