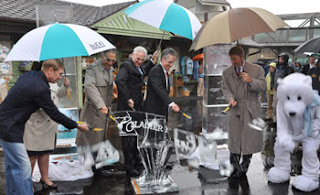 LOUISVILLE, KY – Mayor Greg Fischer, Louisville Zoo Director John Walczak, Louisville Zoo Foundation Chairman Mark Wheeler, Polar Bears International senior scientist Dr. Steven Amstrup and others broke a ribbon made of ice and officially opened the polar and grizzly bear habitat and the town of Glacier Run.  One of the Zoo’s polar bear mascots presented the Mayor with a key (also made of ice) to the town of Glacier Run adding a whimsical note to the opening festivities.
“Glacier Run is an innovative, world-class exhibit that makes the Louisville Zoo an even stronger center for lifelong education and exploration,” Fischer said. “This exhibit also provides another strong destination attraction, meaning increased tourism and a positive impact on our city’s economy.”
Designed as an imaginary town on the edge of the arctic wilderness, Glacier Run is modeled after the real town of Churchill, Canada, the polar bear capital of the world, where humans and wildlife have learned to co-exist.
Glacier Run’s bear habitat is home to Arki, a 26 year-old polar bear that moved here from the Brookfield Zoo in Chicago and three grizzly bears from the Confederated Salish and Kootenai Tribes – Division of Fish, Wildlife, Recreation and Conservation in Polson, Montana — 6 year-old Inga and her two cubs Otis and Rita, each one year-old.  Polar and grizzly bear training and enrichment demonstrations will be held daily at 11:15 a.m. and 2:30 p.m. with a keeper talk at 5:15 p.m.
Glacier Run features include an old mining quarry now flooded with water (for the bears to play in), a fishery and warehouse dock (more bear play space) and a melting glacier that has destroyed a road in the town (even more bear play space). The exhibit offers spectacular views, captivating stories of the arctic and unique opportunities for close-up encounters with the magnificent and iconic polar bear, as well as grizzly bears.  Guests can interact with zoo keepers, learn about current challenges to arctic environments and animals, and discover how incremental changes in our everyday activities and behaviors can make a difference for our planet and these magnificent species.
“Glacier Run is sure to delight and entertain, but will also tell one of the most important environmental stories of our generation. This arctic-themed exhibit fundamentally advances your Zoo’s mission of ‘bettering the bond between people and our planet,” Louisville Zoo Director John Walczak said. “The very nature of this exhibit’s design is based on the idea of humans learning to co-exist with wildlife.”
“The Louisville Zoo remains a powerful educational resource for our entire community, and with the addition of the immersive learning environment and up close bear viewing offered by Glacier Run, students in our region will expand their curiosity for science learning even further,” said Louisville Zoo Foundation Chair Mark Wheeler.
This multi-phase capital project has included several successes to date including the June 2010 opening of the Seal and Sea Lion Habitat, the 2008 completion of the Alice S. Etscorn Tiger Tundra, and the 2007 opening of the Calistoga Splash Park.  The final two phases of Glacier Run are set to open in Spring 2012 —the Glacier Run Arctic Ambassador Center which will include outreach animals such as snowy owls and arctic foxes and an aviary to house the Zoo’s magnificent Steller’s sea eagles.
Once Glacier Run is totally complete, the estimated economic impact of the Zoo on the region will increase to $33.6 million.  Attendance at the Zoo is expected to increase to more than 890,000.