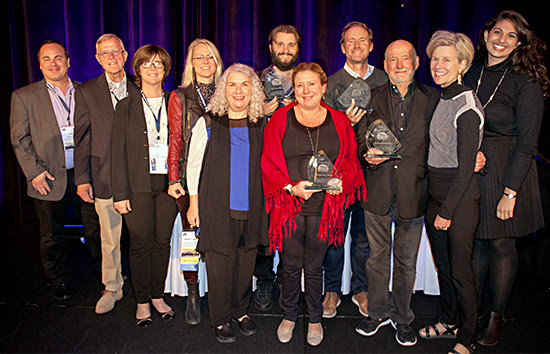 The film also received achievement awards for Best Cinematography, Best Sound Design and Best Original Score, as well as Best Marketing Campaign by a Distributor. Additionally, the film was named in connection with the award for Best Film Launch by a Theatre.

“The response to ‘National Parks Adventure’ has been nothing short of outstanding, and we are honored to receive this recognition by the giant screen industry,” said Shaun MacGillivray, the film’s producer and President of MacGillivray Freeman Films. “The film is inspiring millions of moviegoers to fall in love with the national parks all over again, and to recognize the importance of preserving these untamed wildernesses for generations to come.”

Narrated by Robert Redford, “National Parks Adventure” was filmed in more than 30 national parks, including Yosemite, Yellowstone, Arches and Glacier and in lesser known parks such as Michigan’s Pictured Rocks National Lakeshore

“’National Parks Adventure’ celebrates not only the Centennial of America’s national parks, but wild landscapes everywhere,” said Greg MacGillivray, the film’s director and Chairman of MacGillivray Freeman Films. “These natural environments are an essential part of the human spirit, and we are so pleased the film is encouraging our audiences to discover the beauty and sanctuary of nature’s treasures wherever they are.”

In addition to the film’s artistic success, the film has been a commercial powerhouse. “National Parks Adventure” has generated more than $18 million in worldwide ticket sales since February, making it the highest-grossing documentary of 2016 (for both giant screen and Hollywood-made documentaries).

The film was produced in association with Brand USA, the destination-marketing organization for the United States.

“This movie has been an ideal vehicle for showcasing and inspiring visitation to our national parks and the Great Outdoors experiences that await international visitors in the United States,” said Chris Thompson, President and CEO of Brand USA. “In fact, exit surveys have indicated that 81% of those people who have watched the film are either “much more likely” or “somewhat more likely” to visit the United States after seeing the film.”

“National Parks Adventure” premiered at the Smithsonian’s National Museum of Natural History on Feb. 10, and then opened in more than 100 museums and science centers in the U.S. and around the world. The film continues to open in new markets and is anticipated to play in theatres throughout 2017 and beyond.

Joe Kleimanhttp://wwww.themedreality.com
Raised in San Diego on theme parks, zoos, and IMAX films, InPark's Senior Correspondent Joe Kleiman would expand his childhood loves into two decades as a projectionist and theater director within the giant screen industry. In addition to his work in commercial and museum operations, Joe has volunteered his time to animal husbandry at leading facilities in California and Texas and has played a leading management role for a number of performing arts companies. Joe previously served as News Editor and has remained a contributing author to InPark Magazine since 2011. HIs writing has also appeared in Sound & Communications, LF Examiner, Jim Hill Media, The Planetarian, Behind the Thrills, and MiceChat His blog, ThemedReality.com takes an unconventional look at the attractions industry. Follow on twitter @ThemesRenewed Joe lives in Sacramento, California with his wife, dog, and a ghost.
Share
Facebook
Twitter
Linkedin
Email
Print
WhatsApp
Pinterest
ReddIt
Tumblr
Previous articleTechnifex Introduces Water Web to Waterpark Community at WWA Show
Next articlePHOTOS: MOTIONGATE Dubai Prepares for Opening