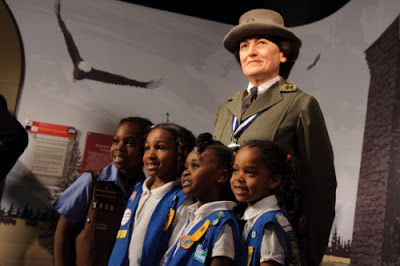 WASHINGTON, May 9, 2012 /PRNewswire/ — Just in time for Mother’s Day, in honor of all the mothers and daughters who share the bond of Girl Scouting and as part of a series of initiatives celebrating the 100th Anniversary of the Girl Scouts, this morning The Presidents Gallery by Madame Tussauds hosted leaders from the Girl Scout Council of the Nation’s Capital (GSCNC) and dozens of D.C.-area Girl Scout Daisies (grades K-1) and troops to unveil a wax figure of the pioneering woman who founded the Girl Scouts 100 years ago, Juliette Gordon Low .

“Juliette Gordon Low is a national icon whose legacy is felt everyday by the millions of girls and women who have benefitted from what she started so many years ago,” said Dan Rogoski , General Manager of The Presidents Gallery by Madame Tussauds. “Our figure celebrates the “mother” of the Girl Scouts and serves as a tribute to her cemented place in American history.”

The launch is part of a series of initiatives celebrating the Girl Scouts’ anniversary, culminating with the colossal Girls Scouts Rock the Mall: 100th Anniversary Sing-Along event on June 9. For the event, which is built on the Girl Scouts’ traditional use of song, more than 200,000 girls and adults are expected to converge at the National Mall to enjoy performances and participate in what might be the world’s largest sing-along.

“Juliette Gordon Low is an American treasure who made an indelible contribution to the lives of girls,” saidLidia Soto-Harmon , CEO, Girl Scout Council of the Nation’s Capital. “We are excited to have her wax figure at The Presidents Gallery by Madame Tussauds, especially on the eve of the largest gathering of Girl Scouts to celebrate the 100th anniversary, Girl Scouts Rock the Mall on June 9.”

With the massive influx of Girl Scouts converging in D.C. the week of Rock the Mall, Madame Tussauds is offering a special package for Girl Scouts who book early (through mid-May), which includes a special admission rate, a 100th Anniversary Patch, attraction scavenger hunt materials and wax hand — a take-home souvenir casted on-site from a guest’s own hand. In addition, to celebrate Mother’s Day, the Presidents Gallery is offering a special deal where all moms go free with any full price admission on May 12th and 13th.

Juliette “Daisy” Gordon Low assembled 18 girls from Savannah, Georgia, on March 12, 1912, for a local Girl Scout meeting. She believed that all girls should be given the opportunity to develop physically, mentally, and spiritually. With the goal of bringing girls out of isolated home environments and into community service and the open air, Girl Scouts hiked, played basketball, went on camping trips, learned how to tell time by the stars, and studied first aid.

Within a few years, Low’s dream for a girl-centered organization was realized. Today, Girl Scouts of theUSA has a membership of over 3.2 million girls and adults, a significant growth from its modest beginnings a century ago. In fact, more than 50 million women in the United States today are Girl Scout alumnae.

Madame Tussauds studio artists in London worked diligently to create this entirely new wax figure ofJuliette Gordon Low. The figure-making process is incredibly intricate taking anywhere from three to six months from start to finish. For example, artists insert each strand of hair individually; creating just the head of the wax figure can take up to five weeks alone. Materials such as red silk are used to create the veins on the eyeballs and it can take technicians almost four days to make a set of teeth. In order to make the figures as lifelike as possible, Madame Tussauds artists study hundreds of photographs and when available, hours of video footage. Of course in some cases, the artists do not have the luxury of photographs or video, and need to rely on historical accounts, even paintings.

The Presidents Gallery by Madame Tussauds is a fully interactive, full-sensory experience, where visitors are able to touch, see and hear major historical events and celebrities in a way unlike any otherWashington D.C. attraction. The attraction, which most recently launched a wax figure of historic U.S. icon Harriet Tubman, showcases likenesses of some of the world’s most recognized individuals, including: international superstars Angelina Jolie and Brad Pitt; superstars Michael Jackson, Lady Gaga, Britney Spears, Selena Gomez, Justin Timberlake, Jennifer Lopez, Rihanna and Tyra Banks; as well as all 44 U.S. Presidents, featured in the U.S. Presidents Gallery. Madame Tussauds is located on the corner of F and 10th Streets, NW, within walking distance of the National Mall and the White House. For more information, visit www.madametussaudsdc.com or call 202-942-7300 or 888-WAX-IN-DC.

Joe Kleimanhttp://wwww.themedreality.com
Raised in San Diego on theme parks, zoos, and IMAX films, Joe Kleiman would expand his childhood loves into two decades as a projectionist and theater director within the giant screen industry. In addition to his work in commercial and museum operations, Joe has volunteered his time to animal husbandry at leading facilities in California and Texas and has played a leading management role for a number of performing arts companies. Joe has been News Editor and contributing author to InPark Magazine since 2011. HIs writing has also appeared in Sound & Communications, LF Examiner, Jim Hill Media, and MiceChat. His blog, ThemedReality.com takes an unconventional look at the attractions industry. Follow on twitter @ThemesRenewed Joe lives in Sacramento, California with his fiancé, two dogs, and a ghost.
Share
Facebook
Twitter
Linkedin
Email
Print
WhatsApp
Pinterest
ReddIt
Tumblr
Previous articleNorthwestern Mutual Foundation Gives Half Million in Grants to Milwaukee Cultural Institutions
Next articleX Flight Spreads Its Wings at Six Flags Great America