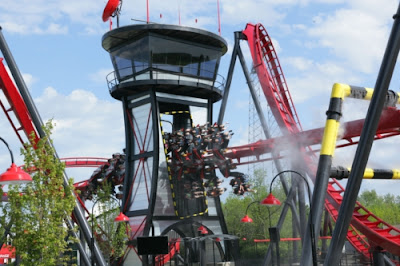 Gurnee, IL, USA (May 10, 2012) /PRNewswire/ — Get ready to take flight! The most highly anticipated thrill experience of 2012 is ready for launch. X Flight, an extreme, revolutionary wing coaster debuts today at Six Flags Great America. The Gurnee theme park’s newest coaster is one of the first-of-its-kind in the world.

X Flight is a ground-breaking wing coaster featuring state-of-the-art technology. X Flight launches riders on a flight that defies gravity, with no track above or below them. Riders sit in pairs, suspended on either side of the track with their feet dangling, as they begin their climb up a 12-story plunge launching them into speeds of 55mph through 3,000 feet of intense drops and five inversions, including a barrel roll and zero-g roll. One of the most adrenaline-pumping moments on the ride is an extreme fly-through where the coaster speeds straight toward a structure, before making a last-minute vertical flip through a keyhole cut-out.

“X Flight is unlike any other coaster in the world,” said Hank Salemi, Six Flags Great America park president. “Soaring through 3,000 feet of twisted steel with no track above or below you is an amazing experience. It feels like you’re riding on the wing of a plane speeding through extreme turns and flips while swerving through a hanger, tower and even water elements. We are thrilled to bring this cutting-edge wing coaster to our guests for the 2012 season.”

Joe Kleimanhttp://wwww.themedreality.com
Raised in San Diego on theme parks, zoos, and IMAX films, Joe Kleiman would expand his childhood loves into two decades as a projectionist and theater director within the giant screen industry. In addition to his work in commercial and museum operations, Joe has volunteered his time to animal husbandry at leading facilities in California and Texas and has played a leading management role for a number of performing arts companies. Joe has been News Editor and contributing author to InPark Magazine since 2011. HIs writing has also appeared in Sound & Communications, LF Examiner, Jim Hill Media, and MiceChat. His blog, ThemedReality.com takes an unconventional look at the attractions industry. Follow on twitter @ThemesRenewed Joe lives in Sacramento, California with his fiancé, two dogs, and a ghost.
Share
Facebook
Twitter
Linkedin
Email
Print
WhatsApp
Pinterest
ReddIt
Tumblr
Previous articleMadame Tussauds DC Celebrates 100th Anniversary of Girl Scouting with Juliette Gordon Low Wax Figure
Next articleSix Flags Great America Opens X Flight