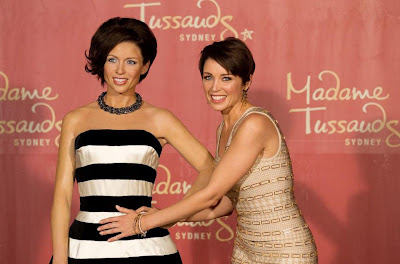 Sydney, Australia (February 9, 2012) Today, Australia’s TV personality, author and fashion designer, Dannii Minogue was introduced to her double in Australia’s first ever side-by-side wax figure reveal in anticipation of the opening of Madame Tussauds Sydney. Dannii is most recently known for her judging and mentoring roles on Australia’s number one show, Australia’s Got Talent and X Factor UK.

Opening in May 2012 in Sydney’s iconic Darling Harbour, Madame Tussauds Sydney is the first of its kind to arrive on Australian shores. The attraction will feature an all-star cast of over 70 figures, including some of Australia’s home-grown legends and, the world’s best known A-list celebrities, as well as sports heroes, rock legends, world leaders and many more.  Dannii Minogue will be joining Nicole Kidman, Hugh Jackman, Ray Meagher and Amanda Keller as well as rubbing shoulders with the likes of Lady Gaga and Johnny Depp.

Dannii said “I am so appreciative of the many hours of hand-crafted work that has gone into my figure. This is real artistry. I’m just astounded by the accuracy, fine detail and remarkable likeness. This is such an incredible experience for me as it was a moment in time that holds such special memories when Kris and I had just announced my pregnancy. I can’t wait for my family, friends and everyone to come to the Sydney attraction and see ‘me’ up close. Be careful what you wish for – I think back to all the times I’ve been busy and needed to be in two places at once – wow, now it’s true!”

It took over 800 hours and 60 of Madame Tussauds’ most talented sculptors and artists to handcraft Dannii’s wax figure. Using techniques perfected over the 250 year tradition of Madame Tussauds, hundreds of Dannii’s measurements were meticulously taken, including the width of her eyes, the length of her fingers and breadth of her face, with each individual hair – including the eyebrows – inserted strand-by-strand.

Adorning the same outfit Dannii wore when she had momentously just announced her pregnancy at the National Television Awards in the UK in 2010; Dannii’s wax figure is dressed in a full skirted vintage black and white prom dress with towering scarlet red shoes.

“To see Dannii’s reaction as she saw herself in wax for the first time was absolutely priceless and now I just can’t wait for the reaction of her fans” said Kristy Enright, Madame Tussauds Sydney spokesperson. “It really goes to show the value of investment from Dannii herself to the painstaking hours invested by our sculptors. We’re thrilled to be able to announce that such a renowned and iconic personality will be joining our star studded line up at Madame Tussauds Sydney.”

Madame Tussauds Sydney is the 13th Madame Tussauds in the world and the fifth in Asia Pacific – joining its highly successful sister attractions in Hong Kong, Shanghai and Bangkok.

Joe Kleimanhttp://wwww.themedreality.com
Raised in San Diego on theme parks, zoos, and IMAX films, InPark's Senior Correspondent Joe Kleiman would expand his childhood loves into two decades as a projectionist and theater director within the giant screen industry. In addition to his work in commercial and museum operations, Joe has volunteered his time to animal husbandry at leading facilities in California and Texas and has played a leading management role for a number of performing arts companies. Joe previously served as News Editor and has remained a contributing author to InPark Magazine since 2011. HIs writing has also appeared in Sound & Communications, LF Examiner, Jim Hill Media, The Planetarian, Behind the Thrills, and MiceChat His blog, ThemedReality.com takes an unconventional look at the attractions industry. Follow on twitter @ThemesRenewed Joe lives in Sacramento, California with his wife, dog, and a ghost.
Share
Facebook
Twitter
Linkedin
Email
Print
WhatsApp
Pinterest
ReddIt
Tumblr
Previous articleNew Survey Released on Marine Mammal Parks and Aquariums
Next articleThe main Attraktion!